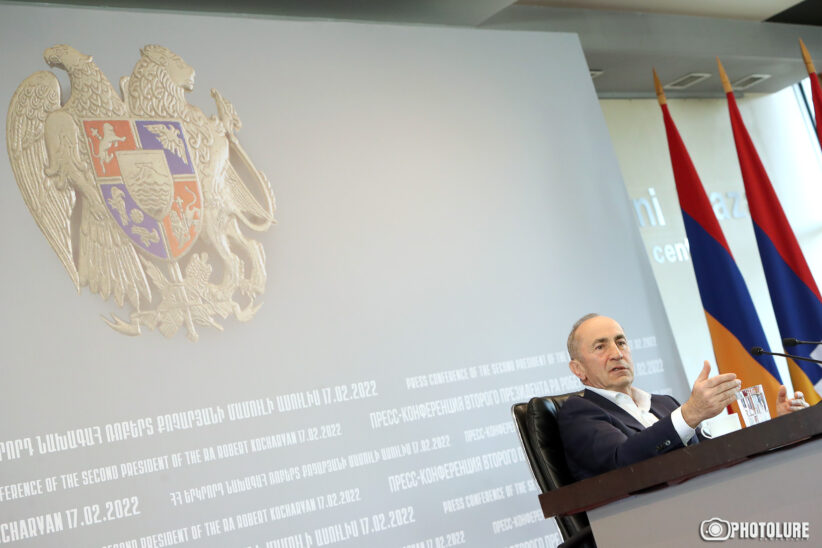 In a press conference on Thursday, former President Robert Kocharyan criticized the current Armenian government for what he sees as mismanagement of the country’s military and of its foreign relations, particularly with Russia and Turkey.

“It seems that this government does not need a combat-ready army,” said Kocharyan, whose decade-long rule was marred by allegations of corruption, vote-rigging, and state cover-ups. “The main component of the country’s security after the [2020 Karabakh] war is still not in the best condition.”

Kocharyan also sharply criticized the Armenian government’s ongoing negotiations with Turkey to normalize relations, arguing that opening the Armenian-Turkish border would benefit Ankara more than it would benefit Yerevan.

Armenia’s economy “will be in shock” if an influx of cheap but relatively high quality Turkish goods is allowed to flow into the country, he said.

“I am not saying that there is no need to open borders, but we need a program for three to five years to protect our markets. [Armenia could] introduce subsidies or taxes on Turkish products, for example.

Kocharyan expressed strong reservations over the Armenian government’s handling of the ongoing talks with Turkey, calling it “the wrong way to normalize relations.”

“What is happening now is beyond my understanding. In fact, the format that I see today is not negotiations with Turkey, but with the Turkey-Azerbaijan tandem, where the agenda is formed by Azerbaijan and voiced by Turkey. This will not yield good results,” Kocharyan said.

Also watch: Garo Paylan on what’s next for Armenia-Turkey relations

Last month, special envoys representing the Armenian and Turkish governments met in Moscow to hold negotiations on normalizing relations in the first direct talks between Armenian and Turkish officials since 2009. The two sides are slated to meet again later this month in Vienna.

Since last December, Armenia has lifted a ban on imports from Turkey and announced the restart of direct flights between Yerevan and Istanbul.

“If we carry out cargo transportation by the Azerbaijani railway, the route [to Russia] will double in length. This will further remove us from our sales markets,” he said. “Don’t these people [in the Armenian government] look at maps? Or do they simply hate maps?”

On Monday, the head of an Armenian government working group on rail restoration announced that Armenian and Russian specialists will soon begin conducting feasibility studies on reopening one of Armenia’s two Soviet-era rail connections with Azerbaijan.

Meanwhile, Kocharyan made sure to stress the importance of Armenia’s relationship with Russia, a close ally.

“It is beneficial for Russia to have a strong ally in the South Caucasus, as we were before the last war,” he said. “When we talk about state interests, we need to soberly assess what we can gain in either case, which option will lead to a stronger, more organized Armenia, so that it will be able to play an important role in the region.”

“There is no other structure that could replace the CSTO. We must stay, cooperate, but not hope for protection…It is naive to believe that the CSTO will react in case of an attack on Armenia,” Kocharyan said.

In fact, the CSTO has made clear that Azerbaijan’s incursions several kilometers deep into the Armenian regions of Gegharkunik and Syunik in May 2021 do not fall under the CSTO charter on collective defense.

Kocharyan also responded to a statement made last week by Belarusian President Alexander Lukashenko on Russia’s relations with the former Soviet states that prompted sharp rebukes from Yerevan.

Last Monday, Lukashenko, who has faced international condemnation for his role suppressing post-election protests that rocked Belarus in 2020, predicted that Russia would swallow up other former Soviet republics, including Armenia, within the next fifteen years as part of a “union state.”

That term refers to a confederation between Belarus and Russia established on paper in a 1999 treaty. However, talks on actually establishing a union have dragged on for decades with few tangible results, even in spite of deepening Belarusian-Russian cooperation since 2020’s post-election crackdown.

Read more: The view from Yerevan on Belarus-Russia integration

“Armenia can’t escape it. Do you think anyone needs them?” Lukashenko said. “Armenia has no place to run.”

That comment prompted a wave of condemnation in Yerevan, with a Foreign Ministry spokesman calling it a “peculiar geopolitical analysis” that “aims to serve, first and foremost, his [Lukashenko’s] domestic political agenda and has nothing to do with Armenia and its foreign policy.”

Lawmakers from the ruling Civil Contract party also criticized Lukashenko’s statement. Representative Vagharshak Hakobyan, who sits on the parliament’s standing committee on regional and Eurasian integration, said that “the leader of a partner state has no right to express such thoughts to other partner countries.”

But Kocharyan had a different take. According to him, Lukashenko simply “said what others think about Armenia” and laid blame squarely on the Armenian government for “doing nothing to make the leaders of other countries change their opinion.”

“I know Lukashenko well. You can accept him, or not, respect him or disrespect him. But one thing is clear: He says what he thinks,” Kocharyan added.

AND IN OTHER NEWS: The Olympics & More