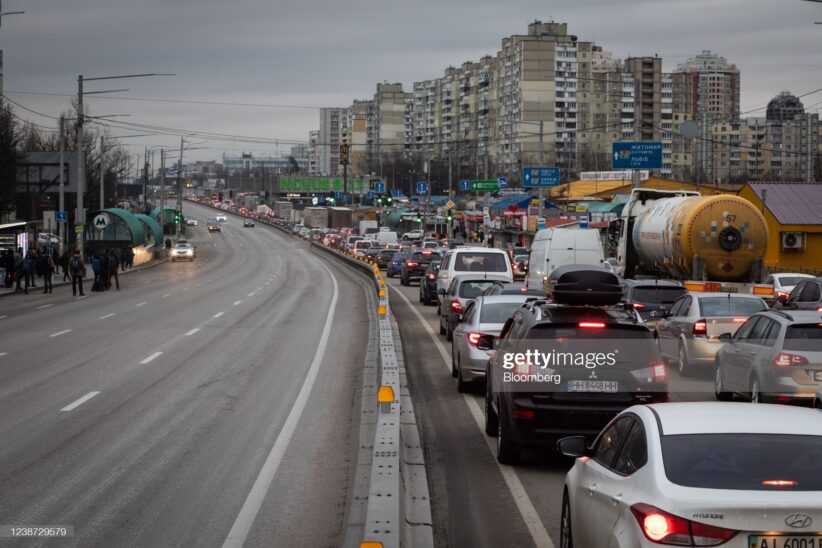 Russia’s invasion of Ukraine, on February 24, 2022, is the biggest geopolitical upheaval since the collapse of the USSR in 1991, and the most dangerous conflict in Europe, in terms of potential consequences, since the Second World War. The peace which had hitherto prevailed on the continent was initially shaken by the conflicts that tore the former Yugoslavia apart. However, these were seen as relatively marginal, more like civil wars with a degree of foreign intervention (especially NATO’s bombing of Serbia in the spring of 1999). Ukraine is being invaded by the world’s largest nuclear power (in numbers of warheads). In very clear terms, the Russian head of state has threatened to use nuclear weapons if any third parties intervene in the present conflict. In return, the French Minister of Defense has pointed out that NATO is also a nuclear alliance. On February 27, Vladimir Putin placed Russia’s nuclear deterrent forces under a “special regime of duty”. Fear has returned to Europe.

Whatever the outcome of the war in Ukraine, the European security architecture will have to be reconsidered. Under Russian pressure, NATO members are closing ranks, but the organization’s expansion to former Soviet countries will de facto be set aside for a long time. The need for the United States to play a leading role in Europe’s security has once again become very obvious.

Will Washington pick up the gauntlet of the Russian attack and reassess its international military presence? Will its policy of partial withdrawal, the last act of which was a debacle in Afghanistan (August 2021), give way to a stronger US presence, in Europe and the Middle East in particular? Germany has been weakened: its realpolitik towards Russia has failed. It has just announced a €100-billion rearmament program. France and the United Kingdom, nuclear powers, may be called upon to play a greater role in Europe than before. The eastern countries bordering Russia are entering a period of insecurity and potential instability; NATO will have to increase its military presence in these regions. The ambiguous political relations between Russia and Turkey over the last few years have reached their limits, and need to be clarified. But Ankara’s full alignment with NATO doesn’t sit well with Erdogan’s personality. Pro-NATO public opinion could gain ground in both Finland and Sweden. Will the two countries want to join NATO? How would Russia react? In any event, the Ukraine conflict proves (after Georgia in 2008) that even a “friendly” country can only count on military support from the West if it is a member of NATO (except in the case of bilateral defense agreements, like those of France in Africa). In principle, the risk of proxy wars between the West and Russia is increasing around the world, but Putin’s Russia doesn’t have the former USSR’s capacity for endurance and foreign projection.

For the time being, China is emerging as the main beneficiary of the new situation in Europe, which is monopolizing the world’s attention, offering Beijing unprecedented freedom of action within its region. Its relationship with Russia seems to have become stronger than ever. On February 4, the Russian and Chinese Presidents, Vladimir Putin and Xi Jinping issued a joint statement announcing “a new era” in international relations. The two countries want the emergence of a “multipolar” world, and the establishment of “a new kind of relationship between world powers”. They proclaimed that the “friendship between them has no limits” and that “there are no forbidden areas of cooperation” between their two countries. In retrospect, it’s conceivable that Putin thus secured China’s support before launching his offensive in Ukraine. Beijing has made it clear that it will help Moscow to sidestep Western sanctions. The day before the Russian attack, a spokeswoman of the Chinese Ministry of Foreign Affairs had condemned “illegal unilateral sanctions”; she stressed that although “since 2011, the United States has imposed sanctions on Russia more than a hundred times”, these have yielded no results. She even went so far as to suggest that the United States was the guilty party in the Ukrainian crisis. On the day of the invasion, Beijing announced tariff reductions on Russian wheat imports (angering rival supplier Australia).

However, the Chinese have a choice. While drawing as many advantages as possible from the Russians, who need their support, the Chinese can perfectly well try, at the same time, to negotiate an economic and political “new deal” with the United States. Unless the strategic prospect of overthrowing the current international pecking order (which the Russians also want, in principle) encourages them to make a move on issues close to their heart, such as Taiwan, opening up a new front. On February 26, Xi thus announced that China and North Korea “will develop their relations of friendship and cooperation” in view of the “new situation”.

To more clearly understand current events in Europe, the Sino-Russian relationship needs to be highlighted. It would be in China’s interest to see Russia emerge from this crisis neither too weak nor too strong. It wants Russia to help establish a new international order, while also needing China’s support in several areas. For historical reasons, the Chinese are still suspicious of the Russians.

The Russians and the Chinese don’t have exactly the same priorities (in terms of importance): NATO for the former, the new international order for the latter. This nuance is reflected in the Russian-Chinese statement of February 4, in which the Chinese assert that they adhere to the concept of “building a common destiny for humanity”, “the significance” of which is noted by the Russians; for their part, the Chinese “note the significance of [Russian] efforts” to “establish a system of equitable multipolar international relations”. The term “Russian efforts” can be read as “NATO-Ukraine and China’s “concept” as the “new international order”. However, the two countries don’t seem to be in complete agreement on the exact definition of the “new order” they want.

Does Iran profit in any way from the dramatic evolution of the Ukrainian crisis? At first glance, yes: a rapid increase in Iranian oil exports would suit the Western countries, as it could push prices down and reduce the relative importance of Russian oil on international markets. This factor could work in favor of the Iranians during the Vienna negotiations on the nuclear issue, but only to a certain extent. For the United States (and the other signatory countries of the 2015 JCPOA agreement), there is too much at stake in these negotiations to concede on key aspects just to hasten an agreement (and a supply rebound for Iranian oil). On the other hand, if Washington decides that it now needs to strengthen its presence in the Middle East, it will prove more difficult to reach a regional security agreement with Iran in that part of the world.

To punish Russia for its act of war against Ukraine, the Western countries have opted for a strategy of asymmetric confrontation. The sanctions voted against Russia are targeting international finance and technological exchanges, two areas in which the West holds dominant positions. Military confrontation can thus be avoided, as the Russians have more conventional weapons in Europe than anyone else. Although “massive” sanctions have been voted against Russia, they leave some breathing space for the country’s economy. In Iran’s case, such an opportunity was denied by the Trump administration when it repudiated the JCPOA in 2018. So unlike the Iranian precedent, Russia hasn’t been completely cut off from the SWIFT mechanism. The aim is not to hit energy transactions between European countries and Russia.

It’s in the area of energy, specifically, that a second major breathing space has been granted to Russia: in principle, it will be able to export oil and gas with virtually no serious restrictions, as soon as the banks have overcome the technical problems caused by the sanctions (letters of credit, etc.). But to overcome the reservations of customers it will probably have to grant discounts. Russia is the world’s largest exporter of natural gas (260 bcm/annum) and one of the main exporters of crude oil (5.5 million b/d) and refined products (2.6 million b/d). It is Europe’s main supplier of natural gas (160 bcm/annum, or 45% of Europe’s total gas imports), crude oil (3.1 million b/d or 29%) and refined products (106 MMt/annum or 51%). Outside Iran, in the rest of the world, there is no more than 4 million b/d of unused oil production capacity, mainly concentrated in Saudi Arabia and the United Arab Emirates. Idle production capacity is negligible for natural gas (except in Russia) and LNG. Reducing Russian oil and/or gas flows would have disastrous consequences for Europe and the rest of the world. “Our sanctions are not designed to cause any disruption to the current flow of energy from Russia to the world”, said Daleep Singh, United States Deputy National Security Advisor for International Economics, during a briefing on February 24. The stated intention is “to allow for an orderly transition of these flows away from sanctioned institutions, and we’ve provided other licenses to provide for an orderly winddown of business”, Singh said.

So the question is whether this “transition” to channels other than sanctioned Russian banks can take place harmoniously, and above all whether or not Russia’s oil and gas export flows will be affected by the war’s consequences. The answer to the latter question doesn’t depend on Western countries alone. What would happen if Russia itself decided to reduce the flow of oil and/or gas? Or to use it to reward (or punish) countries that help it to dodge sanctions? Or to reduce supplies in order to push prices even higher, thus disadvantaging consumers while ensuring constant or additional export revenues? Russia could also decide to limit supplies of other raw materials if it wants to thwart Western countries. It provides 40% of the world’s palladium, a key component of catalytic converters for thermal combustion engines, but which is also used in electronic devices. Russia is also the world’s second-largest exporter of titanium (an important component for metal alloys).

Gazprom’s standing as a reliable gas supplier that honors its contracts under any circumstances, a reputation that it has worked so hard to uphold, has now been lost. Its European customers will henceforth do everything in their power to reduce their dependence on Russian oil and gas. They will devote as much time and effort as necessary to attain this objective. And Nord Stream 2, which was intended to bypass Ukraine, has become a victim of the war in that country: it is lying idle at the bottom of the Baltic Sea, awaiting better days… What will happen when the Russian gas transit agreement through Ukraine (40 bcm/annum) expires on December 31, 2024?

Western countries are gambling that the passage of time will inflict such severe economic (and therefore social and political) pain on Russia that it will be forced to come to its senses. In the short term, Russia holds the advantage, at least on a military level. Moscow has probably also prepared for sanctions by accumulating enough foreign currency to cushion their financial impact, at least partly. But in the long term, the Western countries will most likely hold the advantage. This is the current reasoning, and it may well prove correct. But Russia isn’t Venezuela or Iran: the whole world will suffer the consequences of any sanctions imposed upon it. And that world will never be the same again. Probably with Xi’s support, Putin is placing the West before a trilemma: resist, suffer or find a new modus vivendi with the Moscow-Beijing axis.

The article was published in the World Energy Weekly (February 28 issue), a publication of Petrostrategies, a French think-tank.

Pierre Terzian is an economist, specialized in energy and geopolitics. He is the founder of Petrostrategies.