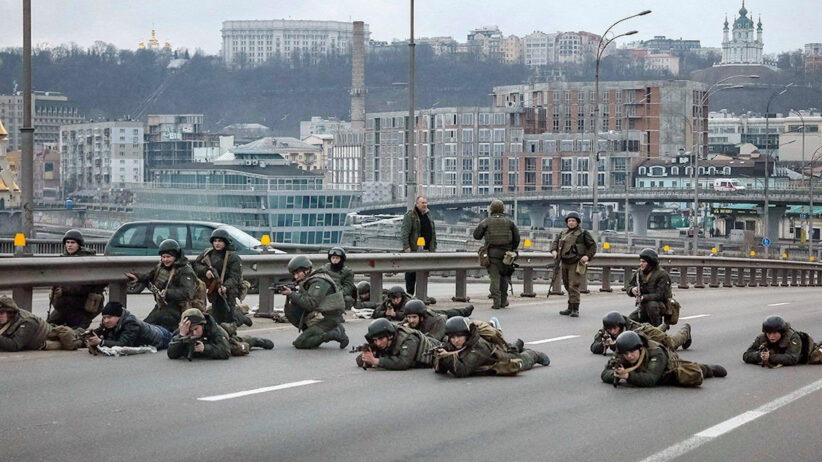 Wow. In a matter of days the world has utterly changed. Things are moving fast and furious, and while the world’s eyes are on Ukraine, there are also numerous intersections with and repercussions for Armenia. In many ways, the 2020 Artsakh War foreshadowed this conflict, everything from the breaking of a status quo to the role of Turkish-made drones.

Meanwhile, Putin is drinking champagne with the president of Azerbaijan 10 feet apart, with a massive rug between them. pic.twitter.com/tGGSoHnM2J

On the eve of the invasion, there was the signing of an alliance between Russia and Azerbaijan. While some naturally looked at this with alarm, others noted that rather than being a teaming-up of two forces, it was a subjugation of Azerbaijan to Russia’s will. It makes sense that with Russian peacekeepers holding a shaky truce together in Karabakh they would want to make sure Aliyev cannot use the distraction of the Ukraine war to his advantage.

The Blue Mosque, a symbol of Iranian art, has been active again in the last 3 decades as the praying and congregation place of Muslims residing in Armenia and a touristic attraction. A great pleasure that its centuries-old Persian epigraphy has been preserved! Who can read them? pic.twitter.com/CNM9eBZG6O

At the same time, Yerevan was hosting a sitting of the EuroNest Parliamentary Assembly, for which two Azerbaijani MPs were in attendance. They used the opportunity to send out tweets with an air of celebratory conquest, with many others replying with claims that Yerevan is actually Azerbaijani land. One of the MP’s tweets was of them at the Blue Mosque on Mashtots Avenue. This tweet got the attention of Iran, which responded with a not-so-subtle rebuke (with tweets in multiple languages) pointing out Persian traces at the mosque.

That 2 idiot parliamentarians from Azerbaijan proclaimed themselves “the real owners” of Yerevan’s Blue Mosque doesn’t cancel out the fact that the Mosque is genuinely sacred to Azerbaijanis, who worshipped there for 200 years, even if it may be *architecturally* Iranian

This is a reminder of the complex history and mixing of cultures in the Caucasus. As Cavid Aga pointed out: the mosque was built during the Iranian Qajar dynasty which had rulers of Turkic descent and was likely constructed by the Armenian workmen of the Khanate of Erivan to serve as a place for worship primarily for Azeris of the time. Whereas today we see things through the lens of nationalism and politics, a real look at the history shows it’s not so black and white.

Pro tip: the Nagorno-Karabakh conflict has absolutely nothing – zilch, nichts, nada – to do with the conflict in the DNR/LNR.

One was the result of decades of repression, and drip-drip ethnic cleansing, even in Soviet times.

The other is an imperialist war.

As Russia recognized Donetsk and Luhansk, two eastern Ukrainian regions, as independent nations as a prelude to war, some Armenians cried foul at the double-standard, or tried to link it to Nagorno-Karabakh in hopes of it being similarly recognized. Others interjected that these are very different situations and not one to be associated with. The Karabakh conflict continues to come up from people on various sides when discussing Ukraine.

As an Armenian living in Ukraine near Donetsk region, it really hurts seeing Armenians cheering for Ukrain’s “karma”. War sucks. You can hate Ukrainian government. I don’t give a shit about it. But please stop hatred towards Ukrainian ppl. They’ve always loved and respected us.

As the war began, there were mixed reactions over whose side to take, seeing as the Ukrainian state has had a generally hostile foreign policy towards Armenia while being supportive of Turkey and Azerbaijan. Tweets like these however recall what matters most, that there are over 50 million Ukrainians, including perhaps half a million Ukrainian-Armenians, caught in the middle, and regardless of what issues one might have with the government, innocent civilians do not deserve such suffering. Armenia has already stated it will accept Ukrainian refugees, and it could be seeing an influx of refugees, not just Armenians, coming from Ukraine and Russia as well, as it appears headed for economic disaster.

Honestly pretty blown away by the absolute lack of humanitarian preparations by Ukrainian govt in Kyiv. In Karabakh in 2020 there was so much stockpiled food people were literally sleeping on pallets of cans. In Kyiv not even water available in metro shelters.

Indeed. It’s also, I think, to try to limit the war’s presence in Russian public opinion. What a contrast to the Nagorno-Karabakh War of 2020, when Azerbaijan was releasing copious drone footage of its weapons killing Armenians. https://t.co/W9n58DSNQ9

There are a number of journalists, like the two above, who were in Karabakh covering the war and are now in Ukraine doing the same there. It makes for some interesting compare and contrast.

So turns out Francis Fukuyama was shamed into deleting his grotesque tweet fetishizing Turkish drones, saying he’d tweet every image of stuff they struck or something along those lines. pic.twitter.com/3YUL08tYMb

One of the more infuriating parts of the war on social media has been the tone-deaf “takes” coming from journalists and alleged experts. Whether it has been the breathless reporters expressing horror at the first war of the 21st century between “civilized nations”, one where Europeans look at the refugees and feel differently because they see “people like them”, to tons of excitement over the fighting from their comfortable perches totally oblivious of the lives being torn apart down below. One prime example has been a practically pornographic celebration of the Turkish Bayraktar 2 drone’s killing power and depictions of it as if it were a child’s toy. After their horrific use in the 2020 war, strides were made to prevent their production. However, now people can’t seem to get enough of them, deriving perverse joy watching young men being blown up from the sky. The war has re-exposed all kinds of familiar trauma for Armenians.

As Armenia is the only country which voted in Strasbourg in favour of keeping Russia as a member of the Council of Europe, should not it be internationally sanctioned for direct support to the military invasion? Were it Azerbaijan, sanctions would already be in the agenda.

Despite Azerbaijan’s treaty of alliance with Russia, Azerbaijan and its paid spokes-“experters” have also been working hard to promote Azerbaijan and Turkey as staunchly supporting of Ukraine (a dubious claim), while trying to tar Armenia as supporting Russia. Both Armenia and Azerbaijan are trapped by their geography and their governments have been mostly quiet as a matter of survival. Yet even the fact that Armenia voted at the Council of Europe not to expel Russia from the body is being seized upon as a reason to sanction it too, which is quite rich coming from Azerbaijan which showed its strong support for Ukraine by hiding during the proceedings thus avoiding a vote.

Here's a problem. You cannot just sanction Russia – you must similarly sanction ALL members of the customs union including #Kazakhstan, #Kyrgyzstan and #Armenia. Russians can import anything they need through those countries with no borders or barriers.

One of the worst flavors of clueless commentary is of the “western white guy” variety, who have taken the opportunity to try to imperiously spread as much misery as possible for no apparent reason. Arbitrarily finding reasons to punish nations like Armenia because Russia might get imports through the non-existent border they (don’t) share, even though as Nate Schenkkan pointed out Russian imports aren’t currently even subject to sanctions, reveals people in influential positions sounding off authoritatively on subjects they know nothing about. The cherry on top of this disaster sundae is that Drew doubled down in replies to his detractors by making the “first-world problem” threat that Armenians could lose their right to use ApplePay (which only just had a limited roll-out in Armenia a month ago) unless it cuts all ties with Russia immediately, despite the fact such a move would be existentially dangerous to its existence. Just stop it, guys.

A growing stream of Russians leaving for Armenia as a temporary refuge, fearing a crackdown at home. I know of art curators, designers, McKinsey advisors and PhD students who left for Yerevan, which is rapidly turning into a new Istanbul of the White Russians in 1918.

Remember that potential influx of refugees fleeing war and uncertainty across Ukraine and Russia? Well it appears they are already arriving. Armenia does not even require a foreign passport for Russian citizens to enter, and with its relatively open atmosphere and lack of conflict with Russia (as opposed to northern neighbor Georgia), it appears to be fast becoming a prime destination for at least temporary resettlement – from both Russia and Ukraine.

So, yeah, that spike in Twitter love Rep. Cuellar’s been seeing?

Experts say it’s a troll network meant to hype him up, with many of the accounts being launched — you guessed it — within days of an FBI raid on his home and campaign office.https://t.co/uy1BkmwHfo

Away from the warfront, American politics were focused on a primary election in Texas between a long-time Congressman conservative Democrat (and co-chair of the House Azerbaijani Caucus) Henry Cuellar vs. a young progressive candidate Jessica Cisneros. This was already going to be a tough challenge for Cuellar, and it became much worse when in January the FBI raided his home as part of an investigation into Azerbaijan.

The Cuellar bot story was funny but could also be more sinister: Right after he’s raided as part of an FBI investigation into Azerbaijan corruption, a botnet forms for him. Did the Azeris respond to being caught in a bribery probe by launching a botnet campaign for Cuellar? https://t.co/q9kNEeQ4ft

As Ryan Grim of The Intercept noticed, the suspicious social media activity supporting Cuellar bears a strong resemblance to the infamous bot network which has long been plastering social media with pro-Azerbaijani propaganda, most notably during the 2020 war. They also appear to be at work posting content promoting Azerbaijan as helping Ukraine while making up reasons why Armenia should be treated the same as Russia.

With all flashbacks to World War II going on, and our discussion here of the Ukraine war and the place of Armenians within it, it is appropriate to mark the anniversary of Missak Manouchian, a leader of the French resistance against the Nazis, commemorated here with a painting where he was imprisoned before his execution.

Partial ruins of a building that was most likely a mosque according to the local archaeological team at the ruins of the ancient Armenian capital of Dvin. Also home to the ruined St Grigor cathedral. pic.twitter.com/GfY1U92Wb8

Finally, following the war can be an emotionally exhausting experience even when watching from afar, and it helps to take some breaks when possible. On that note, take a look at these amazing excavations at the site of the ancient Armenian capital Dvin. Absolutely incredible structures being brought to light, after being hidden for centuries.

Nagorno-Karabakh and the Russian invasion of Ukraine

Could Armenia face an exodus from Russia and Ukraine?