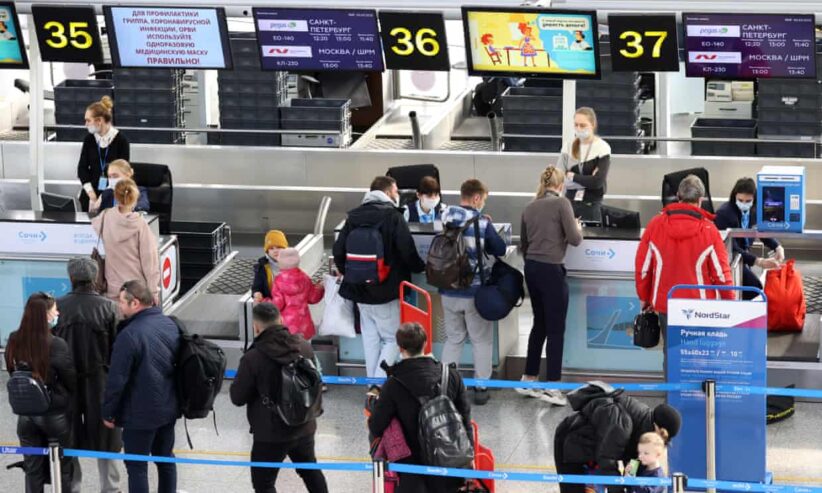 Russia’s brutal invasion of Ukraine has forced over 2 million Ukrainians from the country, in what the United Nations has called the largest displacement in Europe since World War II.

But the conflict has also sparked an exodus from Russia itself, with thousands of Russians seeking refuge in Armenia, Georgia, Turkey, Finland, and other nearby countries. Smaller numbers of Belarusians are also reportedly relocating abroad.

While precise numbers are hard to come by, Yerevan’s Zvartnots airport has seen a significant rise in the number of inbound flights from Russia, and Yerevan residents have reported a notable increase in the amount of Russian being spoken on the city’s streets.

Flights from Moscow to Yerevan, Istanbul, and Belgrade were all reportedly sold out earlier this month, with prices for a seat skyrocketing.

On Monday, opposition lawmaker Vahe Hakobyan said that about 6,000 people from Russia and Ukraine were arriving in Armenia daily.

“Many are leaving, who fear that we will have an introduction of martial law in Russia and conscription to the army,” one Russian woman in downtown Yerevan told CivilNet Monday.

There are several reasons behind the sudden influx of foreigners to Yerevan.

Flights between the two countries are frequent and relatively cheap, and the vast majority of people in Armenia can speak Russian as a second language. Prices in Armenia, on everything from groceries to apartments, are typically lower than in Moscow or other major Russian cities.

What’s more, with Armenia being part of Russia’s Eurasian Economic Union, Russian citizens can stay in Armenia for up to six months visa-free and are not required to obtain work or residency permits.

Finally, Armenia’s appeal to Russians fleeing deepening economic turmoil and fears of an escalating crackdown on dissent in Russia can also be traced back to Yerevan’s booming information technology sector.

Many IT workers are reported to be among the thousands of Russians who have relocated to Yerevan in recent weeks.

Early last week, Economy Minister Vahan Kerobyan said that “more than a dozen companies” from Russia, many of them IT firms, “have actually already relocated” to Yerevan, only about a week after Russia’s invasion of Ukraine began.

“In general, many companies have applied for relocation — dozens, one might even say hundreds,” he added.

The Economy Ministry has also said that several Ukrainian companies, particularly IT companies, have expressed interest in relocating to Armenia or have begun the process of doing so.

In response to the apparent surge in Russian and Ukrainian business interest in Yerevan, the Armenian government has seemingly sprung into action, putting out a Russian-language guide on how to register businesses in Armenia and setting up a working group to assist companies already in the process of relocating.

But it remains an open question whether Yerevan emerges as a permanent home for thousands of newly arrived Russians or merely becomes a springboard for onward movement to the United States or more prosperous countries in Europe.

“It is more likely that [Russian] companies will move to their clients in the West than they will come to Armenia,” he said.

Meanwhile, lawyer Varuzhan Avetikyan pointed out in an interview with CivilNet that Armenia’s labyrinthine bureaucracy should be reformed in order to attract talented foreigners to the country.

“We talked about [issues obtaining] work permits for people from Lebanon in 2020,” he said. “Almost two years have passed, and in this regard, not only has the system of work permits not improved, but it has also become more complicated.”

Other analysts have cautioned that Yerevan, as a relatively small city, may not be equipped to handle such a large number of foreigners seeking apartments and jobs.

Still, the influx of foreigners to Armenia shows no signs of slowing any time soon, at least as hostilities in Ukraine continue to escalate.

Armenian officials have largely refrained from commenting on developments in Russia and Ukraine since the former’s invasion of the latter late last month.

Azerbaijan’s five demands for a peace treaty with Armenia