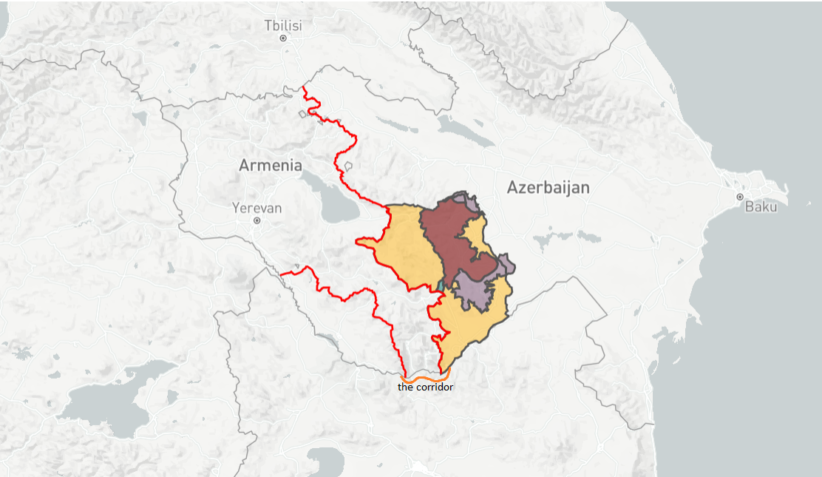 Azerbaijani and Iranian officials signed a memorandum of understanding last week establishing a transport and energy supply corridor connecting mainland Azerbaijan with its exclave of Nakhichevan via Iran.

The route, once completed, will pass within 5 kilometers of the Armenia-Iran border.

The deal envisages major construction projects in the area, including the building of at least four bridges, including motorways, and two rail lines, according to local media reports.

Azerbaijan’s move to establish an overland corridor with the isolated Nakhichevan region via Iran comes after more than a year of speculation over opening such a connection through Armenia’s Syunik region.

Baku has repeatedly referred to a potential Azerbaijan-Nakhichevan connection via Syunik as the “Zangezur Corridor,” even though Armenian officials have consistently stressed that a transport link would not constitute a formal corridor. (The term Zangezur refers to a historical area that covers most of Syunik, Armenia’s southernmost province, and some adjacent lands.)

Armenia and Azerbaijan first committed to unblocking regional connections in November 2020, when they signed a Russia-brokered ceasefire that largely ended hostilities in and around Karabakh.

The agreement stated that “all economic and transport connections in the region shall be unblocked,” but was very light on details — except for a provision calling on Armenia to “guarantee the security of transport connections” between mainland Azerbaijan and its exclave of Nakhchivan.

Importantly, though, the issue of a corridor was not included in a five-point proposal for normalizing Armenia-Azerbaijan relations put forward by Azerbaijan’s Foreign Ministry last weekend.

That notable absence, along with the recent announcement of a corridor via Iran, suggests that Azerbaijan is now looking for alternative routes to Syunik, following over a year of difficult and frustrated talks between Baku and Yerevan.

4,000 Ukrainian citizens have entered Armenia in the last three weeks

Karabakh: Time to be serious about the security challenges