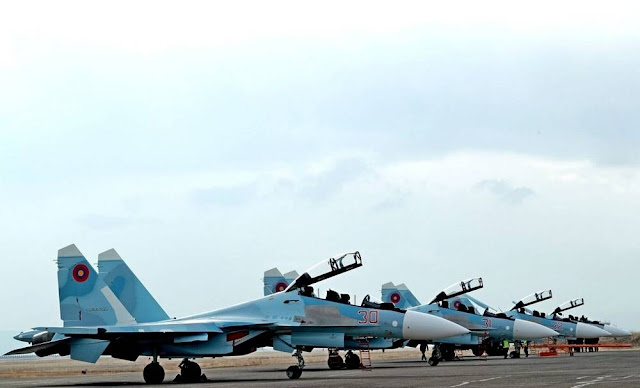 Since the start of the Russian invasion of Ukraine, several fake news stories have spread online, alleging Armenian involvement, direct or indirect, in the war. Most of the disinformation is originated by Azerbaijani and Turkish propagandists who are attempting to make themselves relevant in the eagerly consumed Ukraine War discourse.

Last week, Turkish outlet Haber Global claimed that four Su-30 fighter jets took off from Armenia on March 25, and headed to Russia to be used in Ukraine. The outlet cites an unnamed Turkish intelligence source in the story, noting that, “With this move, Armenia became a partner in the occupation in Ukraine and became a party to the war.”

This story was picked up by EMPR.MEDIA (EuromaidanPR), a self-described Ukrainian citizen media outlet, and spread quickly on Twitter.

Armenia’s Defense Ministry immediately denied that Armenia had transferred Su-30s to Russia. “This information is a total lie. All aircrafts of the arsenal of the armed forces of the Republic of Armenia, with their personnel, are stationed in their locations and are fulfilling their tasks,” says the ministry’s statement.

Armenia had acquired four Su-30SM fighter jets from Russia in 2018–2019, but they were not deployed in the 2020 war in Nagorno-Karabakh.

On March 24, the official account of Ukraine’s parliament, the Verkhovna Rada, tweeted that the Azerbaijani armed forces “went on the offensive in Karabakh, taking advantage of the redeployment of Russian soldiers [from Karabakh] to Ukraine.” The now deleted tweet included a thumbs up emoji and linked to a post on a Ukrainian military Telegram channel, which has also been deleted. The parliament’s tweet was referring to the incursion of Azerbaijani forces into the village of Parukh in Karabakh’s Askeran region last week.

Ukraine’s Ministry of Defense had claimed earlier that in order to urgently replenish its losses, the Russian military is redeploying part of its peacekeeping mission in Nagorno-Karabakh to Ukraine. Ukraine presented no proof of this, but earlier this month Azerbaijani outlets circulated a video supposedly showing Russian troops and equipment leaving Karabakh through the Lachin corridor.
Karabakh’s Security Council denied Russian peacekeepers have begun redeploying. Karabakh’s Foreign Ministry also denied “fighters from Nagorno-Karabakh are arriving in Ukraine”. Russia’s Ambassador to Azerbaijan has also refuted the claim.

Nagorno-Karabakh: A Confrontation in Russia’s Backyard