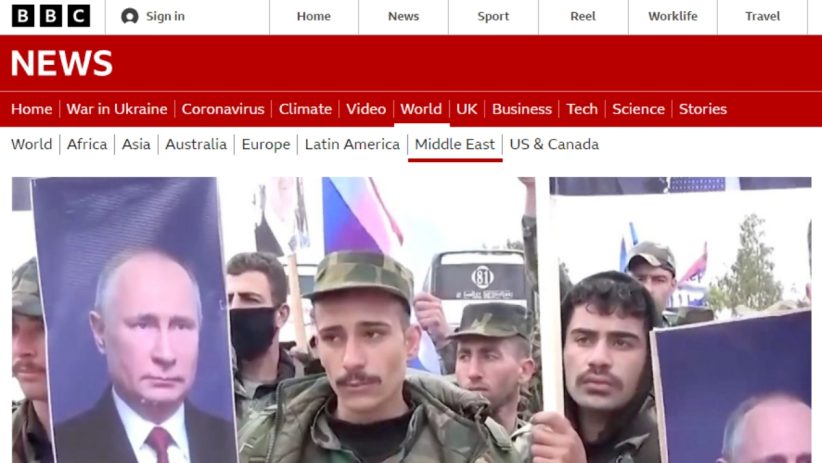 By Hayk Hovhannisyan and Hovhannes Nazaretyan

In a new report, the BBC repeated a baseless claim that Russia transferred and deployed Syrian mercenaries to Ukraine through Armenia. The story originated from Turkish and Azerbaijani sources.

The Turkish media that is cited in the BBC report is Haber Global, which last week also falsely claimed that four Su-30 fighter jets took off from Armenia on March 25, and headed to Russia to be used in Ukraine. It was spread widely on Twitter. The claim was refuted by Armenia’s Defense Ministry and Prime Minister Nikol Pashinyan. The claim was finally refuted on March 31, when the defense ministry took military attaches of EU and NATO member states on a tour to an air base, where they saw for themselves that Armenia’s four Su-30s have not left the country.

In its piece, Haber Global quoted unnamed intelligence sources. The Syrian mercenaries were alleged to have been taken by Russia from Syria’s Latakia to Yerevan’s Erebuni Air Base, then to Russia’ North Ossetia.

Although Haber Global is based in Turkey, it is owned by Global Media Group, which also owns two Azerbaijani news outlets: Media.az and Oxu.az.

According to the flight tracking website flightradar24.com, two flights of a Russian Air Force Tu-154 (RA-85041) to Yerevan’s Erebuni Air Base from the Russian-operated Khmeimim Air Base in Latakia did indeed take place on February 27 and 28. The first later headed toward Mozdok, in Russia’s North Ossetia Republic and the latter to Astrakhan. However, there is no evidence these flights carried mercenaries.

This plane had previously flown to Latakia two dozen times since at least early 2021 and there is no evidence that this plane that landed in Yerevan carried Syrian mercenaries. Furthermore, the source of the claim, as presented above, is an Azerbaijani one that aims to portray as an ardent supporter of Russia’s war in Ukraine. The same outlet promoted the absurd claim that Armenian lended its Su-30 fighter jets to Russia.

At a cabinet meeting, Pashinyan firmly denied that “terrorists are being transferred to Ukraine through the territory of Armenia.” He added, “Every more or less informed one knows that Armenia, which suffered from the involvement of mercenary-terrorists in the war against it two years ago, can never contribute to their involvement in other places, this is completely absurd information.”

It is obvious that #Armenia, which suffered from involvement of mercenary-terrorists in #NagornoKarabakh war two years ago, can never contribute to transfer & deployment of foreign terrorist fighters to #Ukraine through the territory of Armenia.

During the 2020 war in Nagorno-Karabakh, Azerbaijan deployed thousands of Syrian mercenaries who were recruited by Turkey in northern Syria. This story of Russia supposedly used Armenia as transit for transferring mercenaries from Syria to Ukraine may be seen in the context of Azerbaijan’s long tradition of mirror propaganda against Armenia.

Tackling the new demand for jobs in Armenia