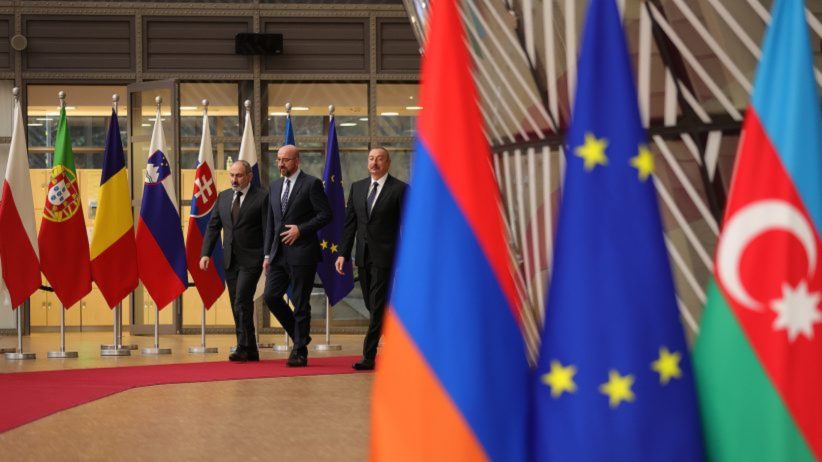 Armenian Prime Minister Nikol Pashinyan and Azerbaijani President Ilham Aliyev agreed on Wednesday to direct their respective foreign ministries to begin preparing a peace treaty, according to a lengthy statement by European Council President Charles Michel, who hosted the two leaders in Brussels.

In his statement, Michel said that both Pashinyan and Aliyev had made a “stated desire to move rapidly towards a peace agreement between their countries,” which have been at loggerheads over the status of the Karabakh region for more than three decades.

The Armenian and Azerbaijani leaders also agreed to convene a joint commission to delimit their border, Michel added, calling delimiting and demarcating the Armenia-Azerbaijan border “essential.”

The border commission, which is expected to be formed by the end of the month, would have a mandate to “ensure a stable security situation along, and in the vicinity of, the borderline,” according to Michel, whose meeting with Pashinyan and Aliyev in Brussels reportedly lasted more than four hours.

Delimitation refers to the process by which a border is legally defined, while demarcation involves the process of physically marking a border, such as by building a fence or wall, according to the Organization for Security and Co-operation in Europe.

More than 30 years on from the collapse of the Soviet Union, the border between Armenia and Azerbaijan remains undelimited and undemarcated, as does the Armenia-Georgia border. In Soviet times, those borders were internal, and so officially defining them was not an issue of concern for the authorities in Moscow.

Armenia has now apparently “agreed to set up a bilateral commission on delimitation without taking steps to stabilize the situation at the border” and “rejected its position that peace talks should be mediated by the OSCE Minsk Group,” Grigoryan noted.

Before Wednesday’s apparent about-face, the Armenian government had insisted that any peace talks with Azerbaijan be held with the participation of the Minsk Group, an international body that was formed in the 1990s to encourage peaceful resolution of the conflict between Armenia and Azerbaijan. It is co-chaired by France, Russia, and the United States.

“Another worrying fact is that the statement made by Charles Michel does not mention Nagorno-Karabakh or the Karabakh conflict,” Grigoryan added.

According to the European Council’s readout of the meeting, Pashinyan, Aliyev, and Michel also discussed “the necessity of adhering fully to” the November 2020 ceasefire agreement brokered by Russia, including restoring Soviet-era rail and road links between Armenia and Azerbaijan, a key point in the agreement.

In addition, Michel “emphasized the importance of humanitarian gestures by both sides” in the course of the meeting, including the return of all prisoners of war and accelerating demining efforts in and around Karabakh.

While the exact number of Armenian soldiers detained in Azerbaijan is unknown, Armenian government officials have estimated that “dozens” remain in captivity, more than a year on from the end of the 2020 war in and around Karabakh.

Pashinyan, Aliyev, and Michel last met in December on the sidelines of the 2021 Eastern Partnership Summit, after which Armenia and Azerbaijan agreed to restore Soviet-era rail links connecting the two countries.

Wednesday’s apparent agreement to begin drafting a peace treaty comes several weeks after Azerbaijan’s Foreign Ministry issued a five-point proposal for normalizing relations with Armenia, which included “mutual recognition of each other’s sovereignty and territorial integrity” and “mutual confirmation of the absence of territorial claims against each other.”

Pashinyan and other high-ranking Armenian officials have since said that the proposal is acceptable, while stressing that “the rights of the Armenians of Nagorno-Karabakh” are “key and fundamental,” as Foreign Minister Ararat Mirzoyan put it last month.

Still, Yerevan’s apparent willingness to move forward with Baku’s five-point plan has led to widespread speculation in Armenia that Pashinyan is preparing to recognize Azerbaijan’s sovereignty over Karabakh — a red line for nearly all Armenians, regardless of political persuasion, polling suggests.

On Tuesday, ahead of Pashinyan’s meeting with Aliyev in Brussels, Yerevan saw its largest demonstration since the summer of 2021, with thousands of demonstrators rallying in downtown Yerevan to demand that “Artsakh (Karabakh) will not be part of Azerbaijan.”

The rally was organized by the Armenia Alliance and the I Have Honor Alliance, the two opposition parties that currently hold seats in the country’s legislature.

Notably, former President Serzh Sargsyan, now a supporter of the I Have Honor Alliance, made an appearance at the demonstration, saying that “the Armenian people will never agree to have Artsakh under Azerbaijani rule under any circumstances.”