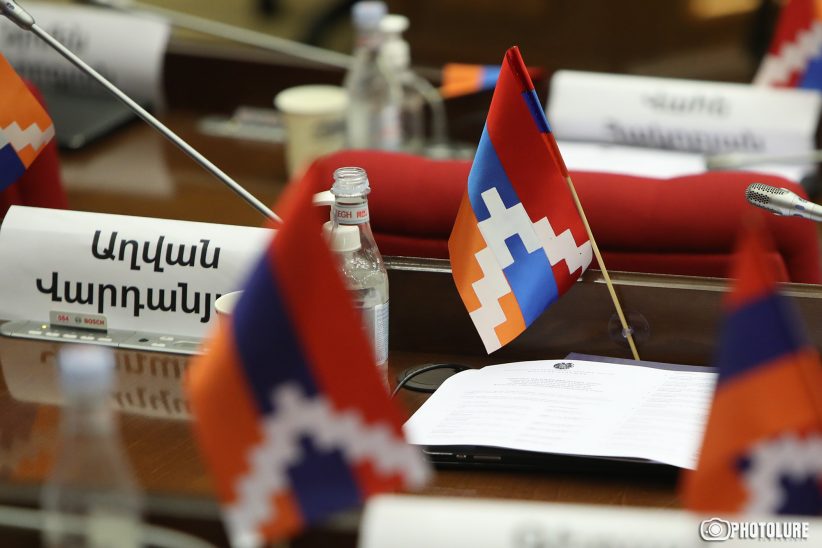 In a striking act of protest, lawmakers from the opposition Armenia Alliance and I Have Honor Alliance brought Karabakh flags to the National Assembly building on Tuesday before walking out of the legislative session.

Representatives of the two parties earlier in the day announced that they would be boycotting legislative sessions this week and instead traveling to various border villages in Armenia, as well as villages and towns in Karabakh itself.

Seyran Ohanyan, the leader of the Armenia Alliance, explained that the lawmakers were protesting an apparent agreement reached last week in Brussels between Armenian Prime Minister Nikol Pashinyan and Azerbaijani President Ilham Aliyev, to begin work on a peace treaty.

“Recent developments confirm concerns that everything is going according to the Azerbaijani-Turkish agenda,” said Ohanyan, who served as Armenia’s Defense Minister from 2008 to 2016. “We are preparing our people for new concessions, defeat, and humiliation within the framework of a so-called ‘peace agreement.’”

Representatives of the ruling Civil Contract party quickly slammed the opposition’s move as irresponsible and reckless.

“Today, with this step, the parliamentary opposition is not defending Artsakh (Karabakh), but rather making a provocation,” said Hayk Konjoryan, the Civil Contract faction leader. “It is escalating the security issues of Artsakh and of Armenians.”

Civil Contract lawmaker Vagharshak Hakobyan echoed those criticisms, saying that opposition politicians were “endangering the citizens of Artsakh and Armenia” with their actions.

The opposition’s decision to visit Karabakh comes a day after Alen Simonyan, the controversial parliamentary speaker, said in an interview to Radio Azatutyun, the Armenian service of Radio Free Europe/Radio Liberty, that he would not visit Karabakh in order not to cause a “provocation” in Azerbaijan.

An unexpected debate over Karabakh’s flag has engulfed Armenian domestic politics since the beginning of the month, when opposition parties organized a massive rally in downtown Yerevan demanding that Armenia make no concessions to Azerbaijan in ongoing peace talks.

The April 5 rally ended with representatives of the Armenian Revolutionary Federation (Dashnaktsutyun) placing a Karabakh flag on France Square in the center of Yerevan.

Members of a fringe opposition party, the National Democratic Pole, then removed the white chevron that differentiates Karabakh’s flag from Armenia’s, saying that Karabakh should be part of Armenia and therefore not have its own flag.

Debate has raged in Armenia for the last few months over Yerevan’s conduct of ongoing peace negotiations with Baku, as concerns mount that the Armenian government is preparing to cede control over Karabakh to Azerbaijan. Tuesday’s row over the Karabakh flag’s place in the National Assembly is just the latest dispute to emerge from these debates.

Armenian political observers lambasted the row over the Karabakh flag as a distraction from the serious and pressing issues the country and region face.

“Azerbaijan is using all its tools to impose capitulation conditions on Armenia, and fierce battles for the Artsakh flag are taking place in the center of Yerevan,” wrote prominent Karabakh analyst Tigran Grigoryan on Facebook over the weekend.

The design of the Karabakh flag, adopted by the unrecognized Nagorno-Karabakh Republic in 1992, is based on the red-blue-orange Armenian tricolor, with the addition of a white, five-toothed chevron on the right-hand side.