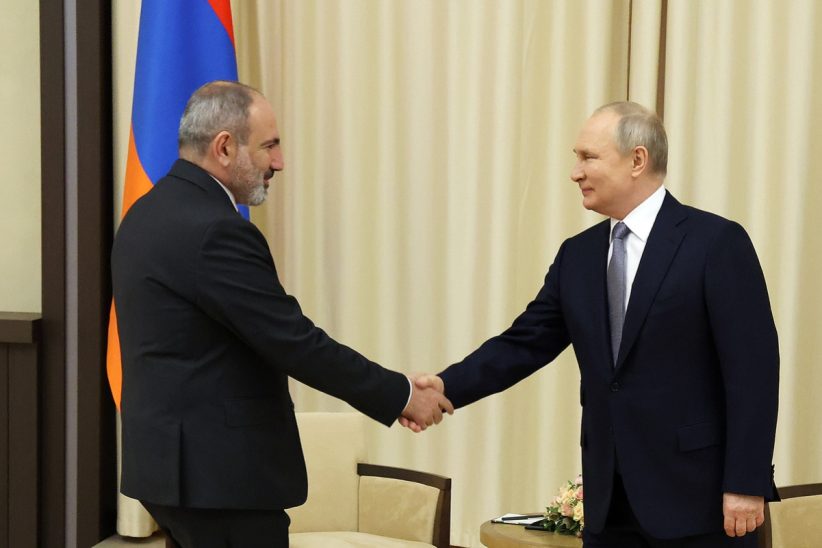 Armenian Prime Minister Nikol Pashinyan traveled to Moscow for talks with Russian President Vladimir Putin in Moscow on Tuesday, with the Armenian leader underlining that “the relations between our countries are at a very high level” and calling Russia “Armenia’s strategic partner.”

“It is no secret that Russia has a key role in ensuring security and stability in our region,” he said.

Putin too stressed the close relations between the two countries, noting that he and Pashinyan “are in constant contact…even though it is a period of pandemic.”

In fact, Pashinyan and Putin have met face-to-face about 18 times and spoken by phone at least 86 times since Pashinyan became prime minister in 2018, according to a tally compiled by RIA Novosti, a Russian state-owned news agency.

The two leaders talked for over three hours on Tuesday about Karabakh’s security and Armenia-Russia economic ties, according to Armenian and Russian media reports.

In addition, Putin “welcomed the process of normalization of Armenian-Turkish relations, launched with Russian assistance,” a post-meeting statement read.

Meanwhile, Pashinyan underscored the role that the Russian peacekeeping contingent stationed in Karabakh plays in “providing security” in the region, but also emphasized that “we need to look at what can be done to make the peacekeepers’ activities more effective.”

Pashinyan’s comment may be read as a reference to an incident late last month when Azerbaijani troops advanced on Parukh, an Armenian-inhabited village in Karabakh that lies within the Russian peacekeeping contingent’s zone of responsibility.

Russian peacekeepers quickly reestablished control of the village, known as Furukh in Soviet times, allowing residents who fled the Azerbaijani advance to return.

“There are still many problems, I agree with you,” Putin said in response.

Pashinyan and Putin also touched on the importance of Armenia-Russia economic ties, with Putin calling trade “one of the leading directions of bilateral cooperation” between Yerevan and Moscow.

“According to our data, in 2021 the growth of trade turnover was 12.8%. In the first months of this year, it has increased by 50%,” the Russian leader noted. “It is a very good indicator.”

Russia is a major trading and investment partner for Armenia, as well as Armenia’s primary source of remittances and tourists. Russia has significant control over — or in some cases, monopolies in — many of Armenia’s key economic sectors, particularly in energy, minerals, transport, and food.

Russia’s sanctions-driven financial crisis, and the attendant collapse in value of the ruble, are expected to hit Armenia’s economy hard. Last week, the World Bank downgraded Armenia’s 2022 economic growth forecast from 5.3% to 1.2%, saying that “the impact of Russia’s invasion of Ukraine on Armenia’s economy is likely to be significantly negative.”

Pashinyan is also due to visit the Russian city of Nizhny Novgorod, though it remains unclear why he will travel there.

Over the weekend, Kremlin Press Secretary Dmitry Peskov notably described Pashinyan’s visit as “an event of special significance” given “the current international situation,” an indirect reference to the dramatic collapse in relations between the West and Russia that has taken place over the latter’s invasion of Ukraine in February.

Pashinyan’s meeting with Putin comes amid growing uncertainty over the future of the Minsk Group, a body formed by the Organization for Security and Co-operation in Europe that is meant to encourage the peaceful resolution of the conflict between Armenia and Azerbaijan.

About two weeks ago, Russian Foreign Minister Sergey Lavrov accused France and the United States of refusing to work with Russia via the Minsk Group, calling the West’s behavior “absolutely irresponsible.”