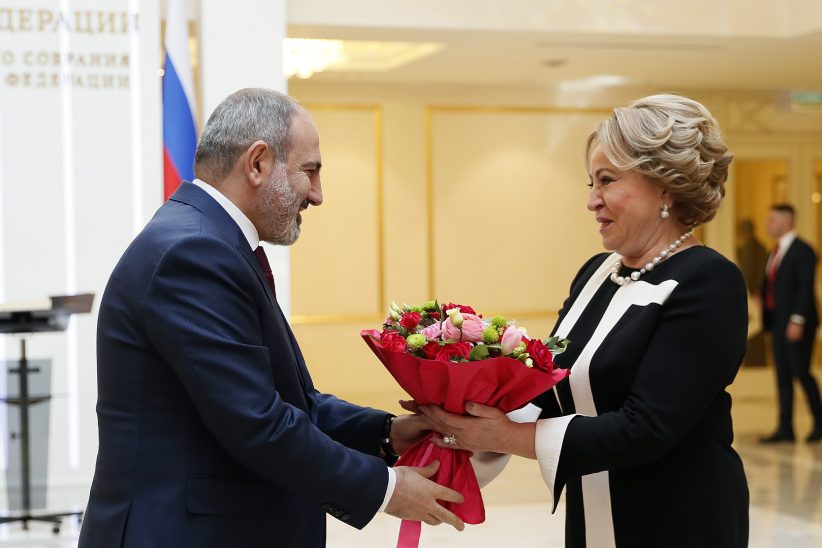 Armenian Prime Minister Nikol Pashinyan held a series of meetings with high-level Russian officials in Moscow and Nizhny Novgorod on Wednesday, alongside a large delegation from Yerevan.

The day began with Pashinyan leading a large Armenian government delegation to the Tomb of the Unknown Soldier, a well-known memorial in central Moscow dedicated to Soviet soldiers killed during World War II. Pashinyan laid a wreath at the site during a remembrance ceremony.

In turn, Volodin suggested that Armenia host a meeting of the Collective Security Treaty Organization parliamentary assembly, and also invited Pashinyan to address the State Duma, Russia’s lower house of parliament, on his next visit to Russia. (The CSTO is a Russian-led military alliance that also includes Armenia and four other post-Soviet countries.)

Pashinyan then met with Russian Prime Minister Mikhail Mishustin, saying he was “sure that in the future we will also cooperate very effectively and find new ways and solutions to further increase mutual turnover and trade.”

Mishustin too focused on Armenia-Russia economic ties, saying he “proposed expediting preparations for signing a new intergovernmental program of economic cooperation between Russia and Armenia.”

He also urged greater use of the Armenian dram and Russian ruble currencies in trade between Yerevan and Moscow.

“In the context of illegal sanctions from unfriendly states against Russia, of course, it is important to more actively use the national currencies in bilateral trade, to develop industrial cooperation, and to open up new opportunities for expanding mutual trade in all directions,” Mishustin said.

In addition, Mishustin underscored the Russian government’s willingness to assist Armenia and Azerbaijan in unblocking regional connections, saying that such moves would “ensure the sustainable development of the region (and) contribute to strengthening peace and stability.”

Wednesday was Pashinyan’s second and final day of an official visit to Russia. On Tuesday, he met with Russian President Vladimir Putin for talks that stretched over three hours.

Calling Russia “Armenia’s strategic partner,” Pashinyan emphasized that “the relations between our countries are at a very high level” and invited Putin to visit Armenia later this year.

Armenians in Artsakh: Life Under the Shadow of Conflict