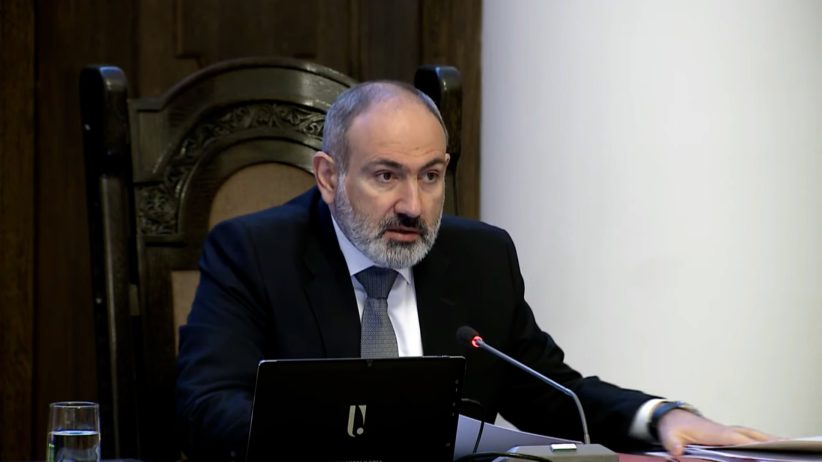 In a cabinet meeting Friday, Armenian Prime Minister Nikol Pashinyan hit back against widely circulating rumors that his government is preparing to cede control over Karabakh to Azerbaijan in ongoing peace negotiations.

“There is no project or draft plan for the settlement of the Nagorno-Karabakh conflict on the table,” he said. “Artsakh (Karabakh) is not a subject to be handed over, Artsakh is the people who live there.”

The Armenian leader also ruled out signing any peace deal with Azerbaijan without first conducting “a wide public discussion, including with the Artsakh public.”

Karabakh’s Armenians must retain their right to live freely and safely in the region, Pashinyan added. “Any solution to the Nagorno-Karabakh conflict in which these conditions are not provided and guaranteed is not acceptable, it will never be acceptable,” he said.

In addition, Pashinyan stressed that he remains in constant contact with Arayik Harutyunyan, the president of the unrecognized Nagorno-Karabakh Republic, noting that, “as always,” he has briefed the Karabakh leader on his recent meeting in Moscow with Russian President Vladimir Putin.

Meanwhile, he reiterated his support for conducting peace talks with Azerbaijan through Minsk Group mediation, underlining “the importance of the international mandate of the OSCE Minsk Group co-chairs in the context of the settlement, with the ensuing political consequences.”

“Assessments about the Minsk Group being dissolved are baseless,” he continued. “The events in Ukraine have had an impact on the relations among the co-chair countries, but it is a fact that the co-chairs have visited the region, and they place importance on resolving the conflict.”

The Minsk Group is a body formed by the Organization for Security and Co-operation in Europe to encourage the peaceful resolution of the conflict between Armenia and Azerbaijan. France, Russia, and the United States co-chair the group, and rising tensions between the West and Russia over Ukraine have cast doubts on the group’s future ability to function.

After repeatedly accusing Paris and Washington of refusing to work with Moscow via the Minsk Group, the Russian government announced it would be appointing its Minsk Group co-chair to a new position as Russia’s special representative for the normalization of Armenia-Azerbaijan relations.

“I do not know what (the Minsk Group’s) future will be, as our so-called French and American partners, in a fever of Russophobia, are trying to cancel everything that has links with the Russian Federation,” Foreign Minister Sergey Lavrov said beforehand.

But Pashinyan’s comments in support of the Minsk Group directly contradict statements made earlier in the day by Azerbaijani President Ilham Aliyev, who called into question the group’s effectiveness.

“The Minsk Group was, in fact, already paralyzed back in 2019. The inaction of the Minsk Group after the provocative statements of Armenia’s leadership on Karabakh’s belonging to Armenia made its existence meaningless,” Aliyev said in a speech in Shushi, also called Shusha, the major Karabakh city captured by Azerbaijani forces in the 2020 war with Armenia.

Aliyev was most likely referring to statements Pashinyan made in August of that year at a speech in Stepanakert, Karabakh’s largest city, calling for Karabakh to unify with Armenia.

Pashinyan’s pronouncement caused an uproar in Azerbaijan at the time, with Aliyev responding several months later that “Karabakh is Azerbaijan, exclamation point.”

In addition, Aliyev’s speech Friday made reference to the set of basic principles that the Azerbaijani Foreign Ministry published last month to lay the groundwork for peace talks.

“This is the only solution and the last chance for Armenia,” Aliyev said. “If they refuse (to negotiate on the basis of the principles), Azerbaijan will declare its non-recognition of Armenia’s territorial integrity.”

Among the principles were mutual recognition of territorial integrity, mutual confirmation of the absence of territorial claims, and mutual obligation not to use force in resolving disputes.

Pashinyan’s statement that “there is nothing unacceptable for us” in the proposals has, alongside his controversial speech to parliament last week, fueled concerns that Armenia is preparing to recognize Azerbaijan’s claims over Karabakh as part of the peace negotiations.

No draft plan to hand over Karabakh to Azerbaijan, Pashinyan says