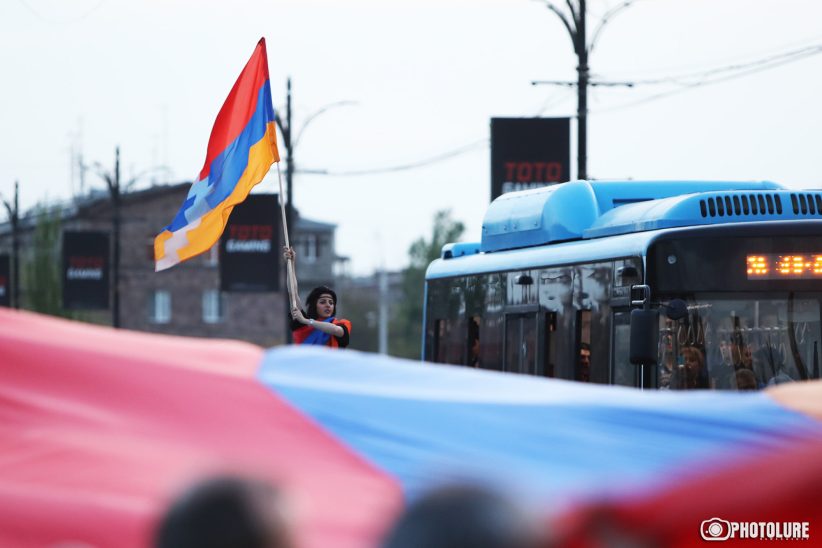 '5165' movement holds a protest march starting from the K. Demircyan Sports and Concerts Complex heading to the Freedom Square of Yerevan, Armenia

While the world continues to follow the war in Ukraine and the growing tensions in relations between Russia and the West, Armenia and Azerbaijan are ready to launch negotiations to sign a peace treaty. All external powers involved in the region’s geopolitics – Russia, the US, the EU, Turkey, and Iran – support this process. Armenia and Azerbaijan will soon launch three separate, though interconnected, processes: the start of the work of the bilateral border delimitation and demarcation commission, the restoration of communications infrastructure, and the launch of negotiations on a peace treaty. These issues are discussed on two parallel platforms – Armenia-Azerbaijan-EU and Armenia-Azerbaijan-Russia. Both Russia and the EU support the start of work on all three tracks. The meetings held in Brussels on April 6 and in Moscow on April 19 and the several phone conversations among the leaders of Armenia, Azerbaijan, the EU, and Russia confirmed the willingness of all sides to start the process. Each of these tracks has its own problems and complications. However, the main challenge is the final status of Nagorno-Karabakh. Armenia and Azerbaijan should agree on this issue before signing a peace agreement.

The EU and the US believe that the option for the agreement could be a mutual compromise: Armenia abandons its demand that Nagorno-Karabakh cannot be a part of Azerbaijan, and Azerbaijan abandons its claim that there has been no Nagorno-Karabakh since the 2020 war and that the war threw the issue of status into the dustbin of history. According to this logic, the compromise solution may be some autonomy for Nagorno-Karabakh within Azerbaijan, with active EU involvement and assistance to provide necessary mechanisms for such a solution. Let us be clear, neither the EU nor the US force Armenia to accept this solution or threaten to punish Armenia in case of its refusal. However, they indicate that if Armenia rejects this compromise, Azerbaijan may revert to military pressure, and neither the EU nor the US will stop Azerbaijan. They also say that there are no guarantees that Azerbaijan will agree to this offer and grant autonomy to Nagorno-Karabakh. However, they promise to do their best to convince Azerbaijan “to be a good guy and not a spoiler.”

The fundamental problem with this solution is that no one in Nagorno-Karabakh will accept this option, even if Azerbaijan agrees to some autonomy. After their rejection, the situation may evolve in two ways – either all Armenians leave Nagorno-Karabakh, or they resist Azerbaijani attempts to impose their presence in Nagorno-Karabakh, making the start of the new war a real possibility. Both options are unacceptable for Armenia and do not serve neither Russia’s nor the West’s interests.

Meanwhile, if Russia does not take any action against Azerbaijani military incursions into Armenia or Nagorno-Karabakh, Russia will face growing anti-Russian sentiment in Armenia. Another side effect of Russian inaction will be a significant loss in image. Many in the region and beyond will ask themselves, how does Russia want to be a great power in a post-unipolar world if Russia cannot do anything against tiny Azerbaijan? Thus, Russia pushed for the launch of three-track diplomacy between Armenia and Azerbaijan, thinking it would deprive Azerbaijan of the “moral or legal right” to resume hostilities. However, Kremlin believes that any agreement between Armenia and Azerbaijan on the autonomous status of Nagorno-Karabakh within Azerbaijan will open the way for the withdrawal of Russian peacekeepers after November 2025. Thus, from the Russian point of view, Armenia should start negotiations on a peace agreement, but should not hurry to sign it.

Meanwhile, if Armenia seeks to make negotiations an endless process, rejecting the option of autonomy and not offering anything else, then, Azerbaijan may very soon return to the policy of military blackmail, escalating along the Armenia-Azerbaijan border and the line of contact in Nagorno-Karabakh. This is not a good option for Armenia, Russia, or the EU. Azerbaijan may take advantage of this situation and accuse Armenia of being a non-constructive actor and spoiler.

Armenia may also suggest that Russia, the US, and the EU approve an international mandate (through the OSCE or UN Security Council) for a peacekeeping mission in Nagorno-Karabakh, which would be deployed until the end of the “transitional period.” The deployment of additional European forces can strengthen the Russian peacekeepers in Nagorno-Karabakh. A potential agreement by Russia, the US, and the EU on this issue may be a good signal that even during the complete rupture of Russia–West relations, global players can cooperate on specific problems.

Benyamin Poghosyan is the Chairman of the Center for Political and Economic Strategic Studies, a Yerevan-based think-tank.