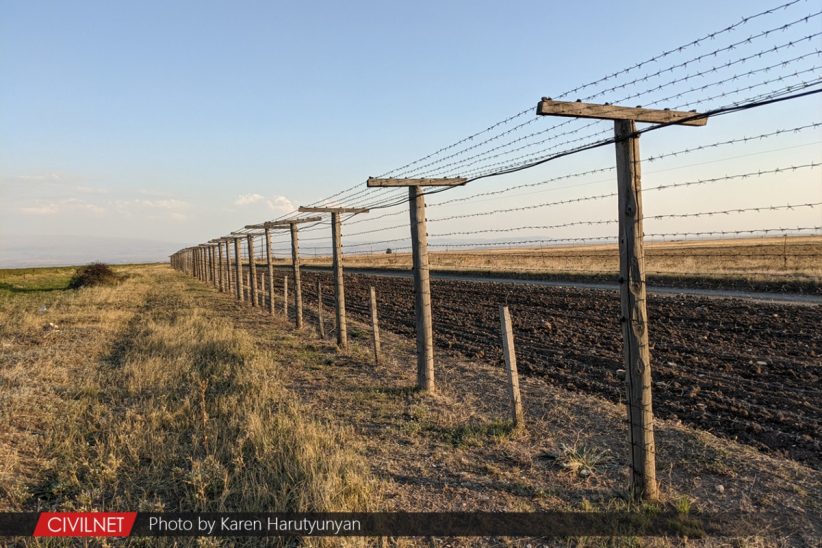 A spokesman for Armenia’s foreign ministry on Monday rejected a claim made earlier in the day by the Turkish foreign minister that the two countries had reached an agreement on “redefining” their shared border, just one day before special envoys are set to meet in Vienna for a third round of talks on normalizing relations.

“We inform that there is no discussion or agreement on the redemarcation of the Armenian-Turkish border,” spokesman Vahan Hunanyan wrote on his official Facebook page. “There is no such issue on the agenda.”

Earlier in the day, Turkish Foreign Minister Mevlüt Çavuşoğlu told reporters at a press conference that “there is agreement on the issue of redefining the borders” between Armenia and Turkey, without providing any further information.

Efforts to normalize the extremely fraught relations between Armenia and Turkey took on a new life late last year, when both countries’ governments appointed special envoys for talks. Though the two neighbors officially recognize one another, they have never established diplomatic relations.

The Armenia-Turkey border, which stretches for hundreds of kilometers, has been closed since the early 1990s, when Turkey, in coordination with Azerbaijan, imposed a devastating economic blockade on Armenia that remains in place to this day.

Other ongoing disputes include Turkey’s refusal to acknowledge the Armenian Genocide, as well as Turkey’s role in aiding Azerbaijan in the 2020 war in and around Karabakh, which saw Armenia suffer a disastrous military defeat and prompted a major humanitarian crisis in the region.

Armenian special envoy Ruben Rubinyan and his Turkish counterpart, Serdar Kılıç, have met twice so far this year, in Moscow in January and in Vienna in February. The meetings were the first direct talks between Armenian and Turkish officials in over a decade.

Çavuşoğlu’s Monday press conference comes on the heels of a whirlwind diplomatic tour of seven countries in Latin America, intended both to bolster Turkey’s relations in the region and to garner international support for President Recep Tayyip Erdoğan’s efforts at resolving the Russia-Ukraine conflict.

During the trip, Çavuşoğlu sparked outrage in Armenia and across Armenian diaspora communities by flashing the “wolf hand” salute at a group of Armenian Uruguayans protesting outside of the Turkish embassy in Montevideo on April 24, Armenian Genocide remembrance day.

The “wolf hand” salute refers to a gesture popular among supporters of the Gray Wolves, a Turkish ultra-nationalist, far-right group with a history of committing acts violence against ethnic minority groups in Turkey, including Armenians.

Uruguay was the first country in the world to recognize the mass killings of Armenians in the Ottoman Empire as an act of genocide. President Luis Lacalle Pou later described the incident as “regrettable.”

At his press conference Monday, Çavuşoğlu sought to justify his actions, saying that “the protesters behaved poorly, and we responded adequately.”

Çavuşoğlu’s “wolf hand” salute was just one in a series of recent actions by Turkish officials that have prompted growing concern in Yerevan over the wisdom of pursuing improved ties with Ankara.

Last Monday, an Istanbul court sentenced Osman Kavala, a prominent Turkish philanthropist and activist, and one of the country’s leading proponents of reconciliation with Armenia, to life in prison without the possibility of parole on charges of “attempting to overthrow the government by force.”

The trial was swiftly condemned by Turkish civil society groups and international human rights organizations as baseless and politically motivated.

A close friend of Hrant Dink, the prominent Armenian Turkish journalist assassinated by a Turkish ultra-nationalist in broad daylight in Istanbul, Kavala has repeatedly advocated for recognition of the Armenian Genocide.

In a separate development the weekend before, Turkey’s ruling Justice and Development Party said it plans to “launch a legal process” against lawmaker Garo Paylan — one of the few ethnic Armenians ever elected to Turkey’s parliament — after he put forward a bill recognizing the Armenian Genocide.
Erdoğan reacted furiously to Paylan’s move, calling the bill an act of “betrayal” and saying that the lawmaker “has no place in the country’s parliament.” The Turkish government has tried to strip Paylan of his parliamentary immunity for years, so far unsuccessfully.

Mirzoyan heads to Washington for talks before Dushanbe meeting