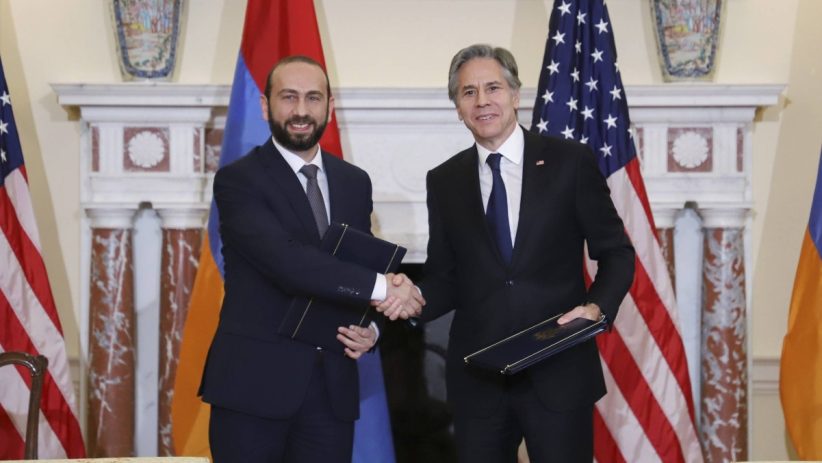 Armenian Foreign Minister Ararat Mirzoyan and U.S. Secretary of State Antony Blinken announced they would be relaunching the U.S.-Armenia Strategic Dialogue and signing a memorandum of understanding on civil nuclear cooperation on Monday, the first of a five-day working visit to Washington by Mirzoyan.

The U.S.-Armenia Strategic Dialogue was initiated in 2019 to mark the one-year anniversary of the Velvet Revolution in Armenia but later suspended due to the COVID-19 pandemic.

Meanwhile, the nuclear agreement “opens new cooperative paths and, I think, can also serve to strengthen very much the bilateral relationship between us,” Blinken said at the signing ceremony.

A State Department media note explained that “nuclear cooperation MOUs are diplomatic mechanisms that strengthen and expand strategic ties between the United States and a partner country by providing a framework for cooperation” on nuclear issues.

Yerevan and Washington had previously signed nuclear agreements in 1997, 2007, and 2017, according to Armenpress, Armenia’s state-run news agency.

Armenia’s Soviet-era nuclear power plant at Metsamor meets about 40% of the country’s domestic electricity needs, but its aged equipment and out-of-date technology mean that, sooner or later, the Armenian government will have to decommission the facility. Rosatom, Russia’s state nuclear energy company, helps run the plant in collaboration with the Armenian government.

Earlier this year, it emerged that Rosatom and Yerevan late last year had signed a memorandum of understanding on constructing one or more new nuclear reactors in Armenia to replace Metsamor. Little detail of that agreement has been made public.

In addition to nuclear energy, Mirzoyan and Blinken also discussed a broad range of other issues, including ongoing efforts to promote democracy and rule of law in Armenia, anti-corruption measures in the country, and Yerevan’s normalization talks with Baku and Ankara.

“These are challenging times in many, many ways, and they’re challenging for Armenia, but know that you have a strong and true friend and partner in the United States,” Blinken said to Mirzoyan.

“I just want to take this opportunity…to praise the leadership of the prime minister and his government, the democratic reforms that they’ve been pursuing, the progress that continues to be made – but also to very much welcome the dialogue between Armenia and Azerbaijan,” he added.

Notably, a State Department readout of the meeting included a line “underscoring the U.S. commitment to help Armenia and Azerbaijan find sustainable peace and prosperity, including in our capacity as an OSCE Minsk Group Co-Chair.”

The Minsk Group is a body formed by the Organization for Security and Co-operation in Europe in the 1990s to encourage the peaceful resolution of the conflict between Armenia and Azerbaijan. France, Russia, and the United States co-chair the group, but the recent collapse in relations between the West and Russia over Ukraine has thrown the group’s future in serious doubt.

In recent months, Moscow has repeatedly questioned the group’s effectiveness moving forward, while Paris and Washington have stressed that they remain committed to resolving the Armenia-Azerbaijan conflict through Minsk Group mediation.

On Monday, Mirzoyan also met with Samantha Power, the head of USAID. The meeting was meant “to reaffirm the United States’ commitment to supporting the Armenian people and strengthening ties between the U.S. and Armenia,” according to a USAID press release.

Mirzoyan and Power “discussed the U.S.- Armenia Strategic Dialogue and Armenia’s priorities for additional USAID support and programming,” it continued.

Mirzoyan met on Tuesday with Under Secretary of State for Political Affairs Victoria Nuland, one of the highest-level officials in the State Department, for a discussion on regional security in the South Caucasus and the status of Armenia-Azerbaijan and Armenia-Turkey talks.