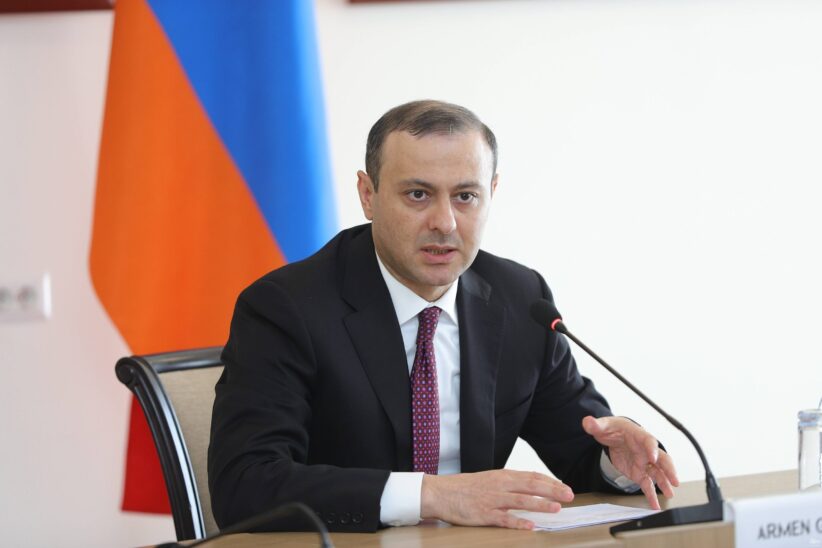 Armenia has responded to a five-point peace plan published by Azerbaijan in March with a six-point proposal of its own, said Security Council head Armen Grigoryan at a press briefing Thursday, without providing details on what exactly Yerevan’s six points entail.

“There is an understanding in our discussions that these two packages should be joined and negotiations should start,” he said, referring to Baku’s five points and Yerevan’s six. “Starting peace talks on the ‘5+6’ points is a legitimate approach, and we have seen a mutual understanding.”

Grigoryan failed to provide any details about what exactly Armenia’s six-point proposal involves, though local media is reporting that the plan likely includes points on the status of Karabakh and the rights of its ethnic Armenian residents.

Disagreement over the final status of Karabakh has long been at the heart of the conflict between Armenia and Azerbaijan, but Yerevan in recent months has been changing its rhetoric, speaking less about Karabakh’s status and more about guaranteeing the rights of the Armenians who live there.

As of Friday afternoon, neither Azerbaijan nor Russia had responded publicly to Armenia’s six-point addition to Azerbaijan’s five-point plan.

Baku, in turn, made its five points public in March and has since referred to them as a set of “principles” on which to lay the groundwork for peace talks.

Azerbaijan’s proposal entails the mutual recognition of territorial integrity, mutual confirmation of the absence of territorial claims, and mutual obligation not to use force in resolving disputes, as well as delimiting and demarcating the border and unblocking transport connections.

In response, Armenian Prime Minister Nikol Pashinyan said that “there is nothing unacceptable for us” in the proposals, fueling concerns in both Armenia and Karabakh that Yerevan is preparing to recognize Baku’s claims over Karabakh as part of a peace deal.

The final two points in Azerbaijan’s proposal are both initiatives championed by Russia, which came out last month in support of the five-point plan, with Maria Zakharova, the Foreign Ministry spokeswoman, stressing that negotiations should be “based on the basic principles proposed by Baku.”

It has been a busy few weeks of diplomacy for Grigoryan and other high-level Armenian government officials, amid an apparent push by Yerevan for increased diplomatic activity in the region and beyond.

Grigoryan traveled to Brussels on Monday for a meeting with Hikmet Hajiyev, the foreign policy advisor to Azerbaijani President Ilham Aliyev, and Toivo Klaar, the European Union’s special representative for the South Caucasus.

Little detail on that meeting has been publicly shared, with Grigoryan on Thursday simply saying, “we are still continuing discussions.”

A joint delimitation and border security commission, which both Armenia and Azerbaijan have agreed to form, has not yet been set up, Grigoryan added, despite earlier pledges that it would be convened by the end of last month.

The next day, Armenian and Turkish special envoys Ruben Rubinyan and Serdar Kılıç held their third round of talks, aimed at normalizing relations between Yerevan and Ankara, in Vienna. Little detail from that meeting has been made public either.

Then on Wednesday, Grigoryan visited Tbilisi, where he met with Prime Minister Irakli Gharibashvili and Vakhtang Gomelauri, Georgia’s interior minister. Again, little detail from those talks have been published.

Meanwhile, Foreign Minister Ararat Mirzoyan on Friday wrapped up a five-day visit to Washington, where he and U.S. Secretary of State Antony Blinken announced they would be relaunching the U.S.-Armenia Strategic Dialogue, which had been suspended due to the COVID-19 pandemic.

The two officials also signed a memorandum of understanding on civil nuclear cooperation between Armenia and the United States.

During his time in Washington, Mirzoyan also met with Samantha Power, the head of USAID, and several high-level officials in the State Department and Congress.

Next Friday, Mirzoyan is planning on traveling to Dushanbe, the capital of Tajikistan, for a meeting next Friday with his Azerbaijani and Russian counterparts, Jeyhun Bayramov and Sergey Lavrov.

“Energy efficiency: from knowledge to action”