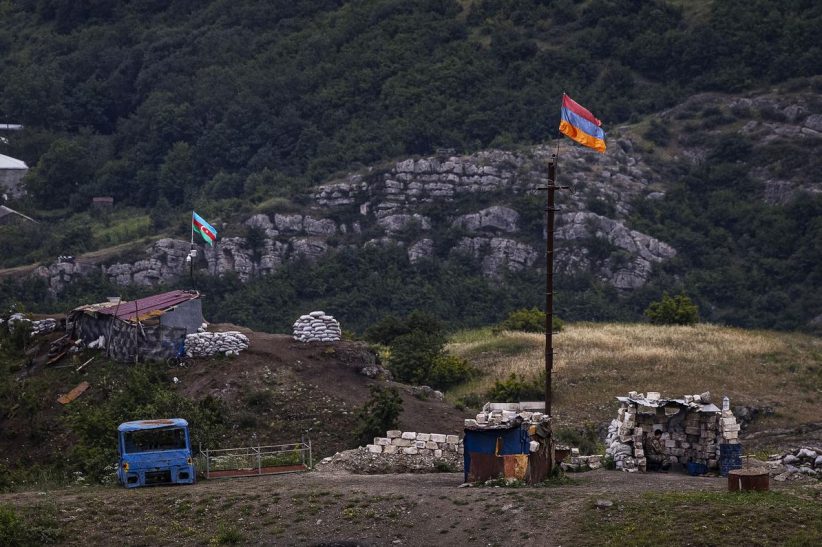 Azerbaijani Deputy Foreign Minister Khalaf Khalafov began the day by telling journalists that “the seven villages of Gazakh, as well as the village of Karki, are Azerbaijani territories, and their return under Azerbaijani control will be decided during the delimitation of the border.”

Karki, known in Armenia as Tigranashen, is another former Azerbaijani-populated village that formed its own enclave within the Armenian region of Ararat, located very close to the border between Armenia and the Azerbaijani region of Nakhichevan.

Edmon Marukyan, Armenia’s ambassador-at-large, hit back against Khalafov’s suggestion in an interview with Armenpress, the Armenian state-run news agency.

“At this moment we don’t possess any legal substantiation that any de jure Azerbaijani enclave has ever existed in the territory of Armenia,” Marukyan said. “On the contrary, there are legal grounds on the village of Artsvashen belonging to Armenia.”

Artsvashen refers to an abandoned Armenian-populated village that formed its own enclave within western Azerbaijan.

Marukyan did not provide any further details explaining why, according to the Armenian government, Yerevan has the right to regain control over Artsvashen, but Baku does not have any legal claims over its three enclaves in Armenia.

The Soviet Union largely drew its borders along ethnic lines, which often meant forming enclaves and exclaves in areas of mixed populations. In Soviet times, these borders were internal, and so it mattered little if a given territory belonged to one union republic or another.

After the Soviet Union collapsed and war broke out between Armenia and Azerbaijan in the early 1990s, each country took control of the enclaves within their borders, forcing residents to abandon their homes and flee.

It is highly unlikely that Armenia would agree to cede control over the Azerbaijani enclaves in its territory, as vital interstate highways connecting Armenia with Georgia and Iran pass through them.

Last week, Armen Grigoryan, who heads Armenia’s Security Council, said that “so far Armenia and Azerbaijan have not discussed the issue of enclaves.”

The process of delimiting the Armenia-Azerbaijan border, which Khalafov alluded to, is meant to be the work of a joint border commission, which both countries agreed to form after high-level meetings in Russia and Belgium late last year and earlier this year.

The commission is set to have a mandate to delimit the border and ensure security along it, but it has not yet been set up, despite earlier pledges that it would be convened by the end of last month.

Speaking to reporters Tuesday, Azerbaijani Foreign Minister Jeyhun Bayramov placed blame for the delay squarely on Armenia, saying that “the Azerbaijani side was ready for this meeting in April, and we are still ready now.”

“Once the Armenian side completes its procedures, a session can be convened,” he added.

The border between Armenia and Azerbaijan officially remains undelimited and undemarcated. As with the enclaves, the border was an internal Soviet boundary, and so officially defining it was not an issue of concern for the authorities in Moscow.

In his interview, Marukyan also touched on Yerevan’s “5+6” peace plan proposal, which was put forward to Baku early last month, but not publicly made known until last week. The “5+6” plan refers to five points put forward by Azerbaijan in March to form the basis of Karabakh peace talks, plus six points issued by Armenia in response.

Repeating a government line, Marukyan said that “there is nothing unacceptable for us in the (five-point) proposal handed over to us by Azerbaijan,” but added that Armenia responded with six points of its own because Azerbaijan’s “proposals do not address all issues of a comprehensive Armenia-Azerbaijan peace agenda.”

Baku has made its five points public, while Yerevan has so far refused to release the content of its six points, though Grigoryan and Marukyan have both said that they include points on the final status of Karabakh and the rights of its ethnic Armenian residents. Disagreement over the final status of Karabakh has long been at the heart of the conflict between Armenia and Azerbaijan.

Azerbaijan’s proposal entails the mutual recognition of territorial integrity, mutual confirmation of the absence of territorial claims, and mutual obligation not to use force in resolving disputes, fueling concerns in both Armenia and Karabakh that Yerevan is preparing to recognize Baku’s claims over Karabakh as part of a peace deal.

In response, Bayramov confirmed that Azerbaijan had received Armenia’s six points, but added “they cannot really be called proposals,” because they were simply in answer to Azerbaijan’s five points.

He also contradicted previous statements by high-level Armenian officials, including by Marukyan earlier that day, that Baku had accepted Yerevan’s six points, noting that a “mutual understanding” had not yet been reached.

In addition, Bayramov said that Baku would turn down a proposal by Yerevan, apparently included as one of the yet-to-be-published six points, that would secure a role for the Minsk Group in the peace process.

Since its victory in the 2020 war in and around Karabakh, Azerbaijan has repeatedly rejected the involvement of the Minsk Group, a body formed by the Organization for Security and Co-operation in Europe in the 1990s to encourage the peaceful resolution of the conflict between Armenia and Azerbaijan.

“There is no contact between the Minsk Group co-chairs, against the background of the events in Ukraine,” Bayramov said. “The group is almost paralyzed.”

France, Russia, and the United States co-chair the group, but the recent collapse in relations between Russia and the West over Ukraine has thrown the group’s future in serious doubt. Moscow has repeatedly questioned the group’s effectiveness moving forward, accusing its co-chairs of “canceling” Russia’s role, while Paris and Washington have stressed that they remain committed to the body.

In addition, Bayramov commented on the ongoing anti-government protests in Yerevan, which are now entering their second week, saying that the participation of about “six or seven thousand people…proves that Armenian society is tired of false promises and illusions.”

Amid widespread concern that Armenian Prime Minister Nikol Pashinyan is preparing to cede control of Karabakh to Azerbaijan, thousands of protesters, who have dubbed themselves the Resistance Movement, have come out to the streets, demanding Pashinyan’s resignation and preemptively rejecting any such deal with Azerbaijan.

New $110 million tech center to be built in Yerevan