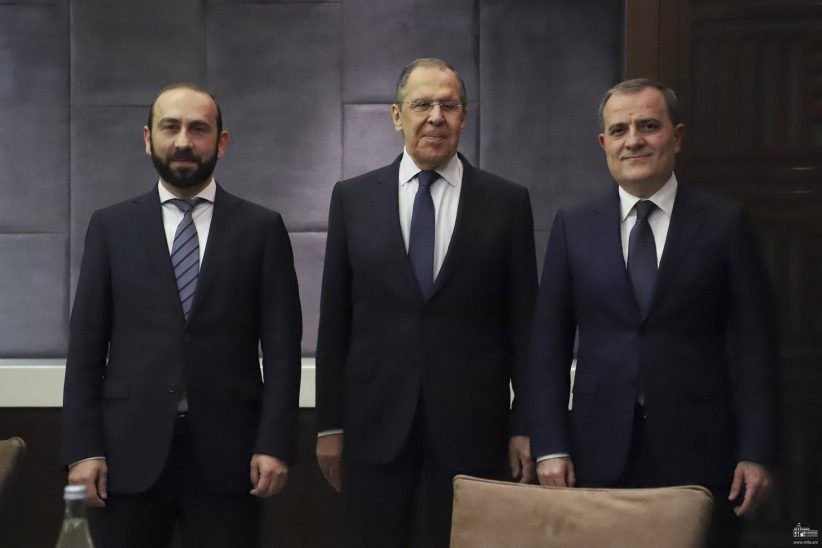 The heads of the Armenian, Azerbaijani, and Russian Foreign Ministries agreed to continue working toward normalizing relations between Baku and Yerevan at a meeting Thursday in Dushanbe, the capital of Tajikistan.

It was also announced that two working groups, one on unblocking transport connections between Armenia and Azerbaijan, the other on delimiting the countries’ border, will convene on Monday and Tuesday in Moscow.

“We are interested in turning the South Caucasus into a zone of peace, sustainable development, and prosperity,” Russian Foreign Minister Sergey Lavrov said. “I hope that today’s meeting will make it possible to move forward along the path that was outlined by our leaders.”

“We are ready to continue all work on the current formats,” Mirzoyan said, listing the unblocking of transport links between Armenia and Azerbaijan, normalizing relations between the two countries, and “solving all remaining problems,” including the release of all remaining Armenian prisoners of war held in Azerbaijan.

“We believe that there is a good prospect (and) a good opportunity to achieve results and achieve full implementation of tripartite statements,” Bayramov said.

The “tripartite statements” refer to agreements reached by Baku, Moscow, and Yerevan in late 2020 and last year to establish a ceasefire in and around Karabakh, to unblock all economic and transport connections between Armenia and Azerbaijan, and to delimit the two countries’ border.

Also on Thursday, Mirzoyan announced that two long-discussed working groups on key Armenia-Azerbaijan issues will convene next week in Russia.

“On May 16-17, a meeting will take place in Moscow on the matter of unblocking connections,” Mirzoyan said. “A bilateral meeting on the issues of delimitation and border security will be organized again in Moscow during the same days.”

The November 2020 ceasefire document signed by Armenia and Azerbaijan and brokered by Russia included an agreement that “all economic and transport connections in the region shall be unblocked.”

Meanwhile, the process of delimiting the Armenia-Azerbaijan border is meant to be the work of a bilateral border commission, which both countries agreed to form after high-level meetings in Russia late last year.

The commission is set to have a mandate to delimit the border and ensure security along it, but it has not yet been set up, despite earlier pledges that it would be convened by the end of last month.

The border between Armenia and Azerbaijan remains undelimited and undemarcated, as it was previously an internal Soviet boundary, meaning that officially defining it was not of concern for the authorities in Moscow.

Prior to the trilateral meeting, Lavrov held separate talks with both Mirzoyan and Bayramov.

During their meeting, Lavrov and Mirzoyan “discussed cooperation in integration associations,” according to a Russian Foreign Ministry statement.

“The ministers discussed in detail…the implementation of agreements reached during the official visit of Pashinyan to the Russian Federation on April 19-20,” the read-out said.

Pashinyan made a state visit to Russia last month, where he met with Putin and several other high-ranking Russian officials. During the trip, Moscow and Yerevan signed several bilateral agreements, cementing Armenian-Russian cooperation in a broad range of fields.

“Approaches to promoting cooperation within the framework of common integration associations, including the CSTO and the EAEU, were compared,” the ministry added.

After his meeting with Lavrov, Mirzoyan announced that Putin will pay a state visit to Armenia later this year, declining to provide an exact date for the trip.

“There is an understanding that it will take place in the second half of this year, in the period of October to December,” he said. “The timeframes are still being clarified.”

For his part, Lavrov underscored the importance of “allied cooperation” between Russia and Azerbaijan during his meeting with Bayramov.

In February, just one day before Russia invaded Ukraine, Aliyev and Putin signed a joint declaration upgrading the level of cooperation between their two countries to an “allied level.”

Thursday’s meetings all took place on the sidelines of a twice-yearly summit that brings together the foreign ministers of member states of the Commonwealth of Independent States, an intergovernmental organization of nine post-Soviet countries. Armenia, Azerbaijan, and Russia are all CIS members.

In a separate development Thursday, Kremlin spokesman Dmitry Peskov announced that Pashinyan will attend a summit of the CSTO in Moscow on Monday, where he will also meet with Stanislav Zas, who heads the alliance. Armenia currently holds the organization’s rotating chairmanship.

The news comes amid a flurry of diplomatic activity by Armenia in the region and beyond. In recent months, Pashinyan, Mirzoyan, and other high-level Armenian officials have paid visits to Russia, the United States, and several European countries, among others.

Armenia: A failed government and a failed opposition