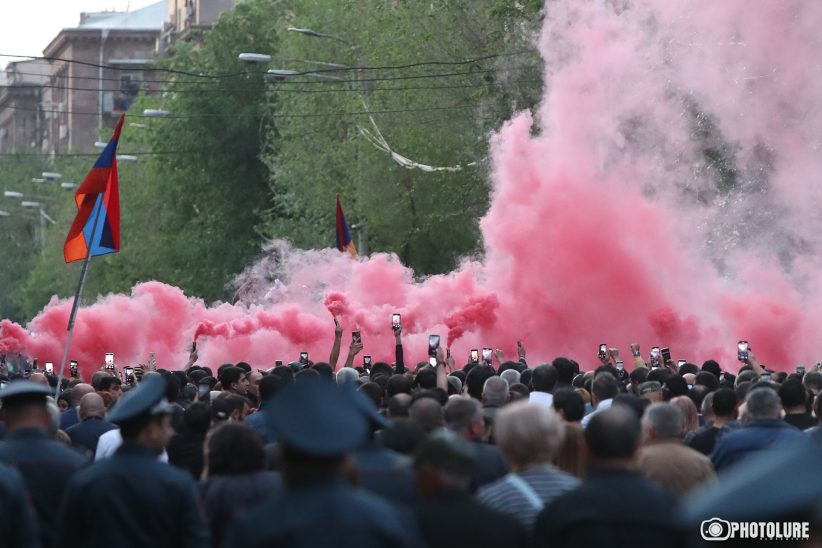 Demonstrators organized motorcades and car rallies throughout Yerevan on Monday morning, meant to disrupt traffic in the capital, as anti-government protests stretched into their third week. As of noon 32 protesters had been arrested, according to the police.

On Tuesday demonstrators will “suspend the entire city” by fanning out in small groups across Yerevan to paralyze traffic, protest leader and opposition lawmaker Ishkhan Saghatelyan announced on Sunday.

Thousands of demonstrators demanding that Prime Minister Nikol Pashinyan resign continued gathering over the weekend on France Square, a major intersection in central Yerevan that the opposition has chosen as the site of an indefinite sit-in.

At a demonstration there on Sunday — attended by a noticeably larger crowd than most other rallies over the past few days — Saghatelyan again pledged that “we will end this struggle with a victory.”

Former President Robert Kocharyan, who led the country from 1998 to 2008, was reportedly in attendance.

The past two weeks have seen daily protests and acts of civil disobedience across the capital, including disruptions to major thoroughfares and blockades on government buildings, resulting in hundreds of detentions by the police.

The arrests have prompted criticism from Armenian civil society groups, as well as from Kristinne Grigoryan, Armenia’s Human Rights Defender, who has released several statements expressing concern over the police’s disproportionate use of force in detaining demonstrators.

Freedom House, a well-known nonprofit based in Washington, also commented on the arrests last week: “We are disturbed by violence taking place during protests targeting journalists, public figures, and ordinary citizens in Armenia. We appeal to the people to exercise their fundamental rights peacefully and call on the police to refrain from using disproportionate force.”

The surge in protest activity comes mainly in response to a controversial speech Pashinyan gave to parliament last month that many in Armenia interpreted as an indication of his willingness to cede control over Karabakh to Azerbaijan in ongoing peace efforts.

Pashinyan’s comments prompted widespread outrage in Armenia, leading thousands of protesters, who have since dubbed themselves the Resistance Movement, to come out to the streets, preemptively rejecting any deal with Azerbaijan that would see ethnic Armenians lose control over Karabakh.

Armenia’s negotiating position had been fairly unclear until this weekend, when Edmon Marukyan, the country’s ambassador-at-large, made public for the first time a six-point peace proposal Yerevan put forward in response to a five-point plan from Baku.

The points confirm that Armenia recognizes Azerbaijan’s territorial integrity and reiterate Yerevan’s commitment to joint agreements already reached with Baku and Moscow, but also state that “guaranteeing the security of the Armenians of Nagorno-Karabakh, respecting their rights and freedoms, and also determining the final status of Nagorno-Karabakh are fundamental for the Armenian side.”

The opposition has already expressed dissatisfaction with the proposal and called on the government to more explicitly guarantee that Yerevan will not cede Karabakh to Baku in the course of peace negotiations.

Should he come to power, Saghatelyan has ruled out accepting any agreements with Baku that would see Karabakh fall under Azerbaijani control or allow Baku to access a corridor across Armenia to connect mainland Azerbaijan with the Nakhichevan exclave.

Likewise, he has rejected signing any agreement to normalize relations with Ankara that does not include Turkish recognition of the Armenian Genocide.

In his speech on Sunday, Saghatelyan detailed his vision for a post-Pashinyan Armenia, arguing that the country should focus on developing a “competitive, advanced economy,” building up “a combat-ready army,” and pursuing “professional, proactive” diplomacy.

Last week he proposed forming an interim government of national unity, should Pashinyan resign, which would oversee “free, fair, competitive elections…in one to one-and-a-half years.”

Pashinyan, who has served as prime minister since 2018, has survived numerous attempts on his political life, including monthslong protests in the immediate aftermath of the 2020 war in and around Karabakh that attracted significantly larger crowds than the current demonstrations have so far.