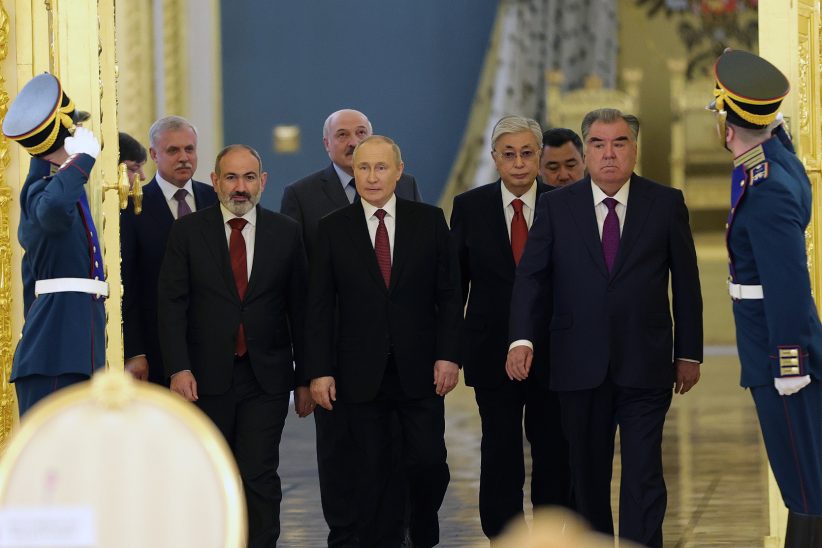 Armenian Prime Minister Nikol Pashinyan joined the leaders of the Collective Security Treaty Organization’s five other member states in issuing a joint statement reiterating their commitment to the military alliance at a summit in Moscow on Monday.

The CSTO is a Russian-led military alliance that unites Armenia with Russia and four other post-Soviet states: Belarus, Kazakhstan, Kyrgyzstan, and Tajikistan. Armenia currently holds the group’s rotating chairmanship.

The alliance “has raised the cooperation of member states to the qualitatively new level of allied relations, amassed significant potential to counteract a wide spectrum of modern challenges and threats, and has become an important factor for peace and stability in the Eurasian space,” the statement read in part.

“The improvement of the organization’s structure is progressing, and the spectrum of its activities is expanding in all major areas,” it continued. “We are satisfied with our expanding coordination in the international arena and the level of foreign policy coordination on the main issues of the global and regional agenda.”

At Monday’s summit, Pashinyan notably called out the alliance for failing to respond to an incursion by Azerbaijani troops into Armenian territory last May, in stark contrast to its quick response to the mass civil unrest that shook Kazakhstan in January.

“Armenia applied to the CSTO to act on the mechanisms that are meant to be included in the provisions of the CSTO response to crisis situations,” he told fellow alliance leaders. “Unfortunately we cannot say that the organization reacted in the way Armenia expected.”

Pashinyan also brought up arms sales by other CSTO members to Azerbaijan, saying that Armenia “has been raising for a long time the issue of arms sales by CSTO member states to a non-friendly country.”

“Those weapons were used against Armenia and the Armenian people. Honestly, the reaction of the OSCE members during and after the 44-day war of 2020 did not make Armenia very happy, but I want to underscore the special role of Russia and Vladimir Putin personally in ending the war,” he said.

Yerevan remains “committed to the organization’s further development and views the organization as a key factor in ensuring security in the Eurasian region and stability for Armenia,” Pashinyan added.

During the summit both Russian President Vladimir Putin and Belarusian President Alexander Lukashenko touched on the war in Ukraine, but the issue was notably left out of the final joint statement.

Belarus is the only CSTO member that has openly supported Russia’s invasion of Ukraine, with Armenia and the other three alliance members attempting to walk a tightrope of neutrality.

Stanislav Zas, a Belarusian lieutenant general who heads the CSTO and also attended the summit, said that “the issue of any participation or inclusion of the CSTO in this special military operation was not raised or discussed.”

During the summit CSTO leaders also discussed the recent announcements by Finland and Sweden that they would pursue NATO membership, with Putin saying that the two Nordic states joining NATO “does not pose an immediate threat for Russia,” but adding that “the expansion of military infrastructure on that territory will certainly evoke our response.”

Before and after the summit, Putin held one-on-one meetings with the five other CSTO leaders, including Pashinyan, less than a month after the two leaders last held talks.