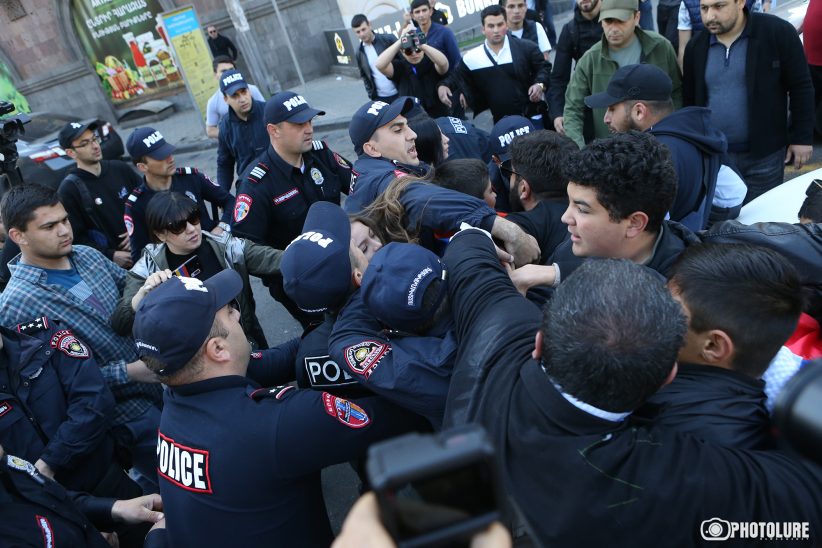 The police said on Tuesday that they detained at least 414 people after anti-government protesters fanned out in small groups to stop traffic across Yerevan, at one point blocking over 50 streets. It is the single highest number of arrests made in one day since daily protests began over two weeks ago.

Anti-government protests in Yerevan are now entering their third week, with thousands of people coming out to the streets to demand that Prime Minister Nikol Pashinyan resign. The demonstrations have included public assemblies, marches, and acts of civil disobedience, as well as an indefinite sit-in at France Square, a major intersection in central Yerevan.

All streets in the capital were unblocked by noon, according to the police, who have faced sustained criticism from local civil society groups, Human Rights Defender Kristinne Grigoryan, and international human rights organizations for alleged disproportionate use of force.

In a lengthy statement Tuesday evening, Grigoryan said that her office had recorded numerous forceful arrests by police that day, as well as cases of verbal abuse between protesters and police.

Grigoryan said the Human Rights Defender’s office also documented other instances of police misconduct, including detaining demonstrators without explaining charges against them and holding them without charge beyond the maximum time limit set out in Armenian law.

The surge in protest activity comes mainly in response to widespread concerns that Pashinyan is preparing to cede Armenian control over Karabakh to Azerbaijan as part of a hypothetical peace deal. The protesters, who have dubbed themselves the Resistance Movement, have preemptively rejected any deal with Azerbaijan that would see ethnic Armenians lose control over Karabakh.

Following Tuesday’s acts of civil disobedience, demonstrators gathered for a rally in France Square, which has been the site of near-daily speeches by opposition politicians and protest leaders. About 4,300 people took part, according to the Union of Informed Citizens, a prominent civil society group that measures protests using aerial footage.

Notably, the rally included for the first time speeches by the relatives of soldiers killed in the 2020 war in and around Karabakh.

“If we do not achieve justice in this extremely important and delicate case, then I will not believe in justice for anything else in Armenia,” said Karin Tonoyan, the leader of a small political party whose son died in the war.

The relatives of soldiers killed in the war have been gathering over the past month in front of government buildings, demanding to file a criminal suit with the prosecutor general against Pashinyan on charges of allowing “mass murder.”

The six-week conflict left over 3,800 Armenian soldiers dead, many of them young conscripts. For a small country like Armenia, it effectively amounts to a lost generation.

Daily demonstrations will continue indefinitely in Yerevan until Pashinyan resigns, according to protest leaders.

Partnership Agreement and Karabakh on agenda as Mirzoyan heads to Brussels