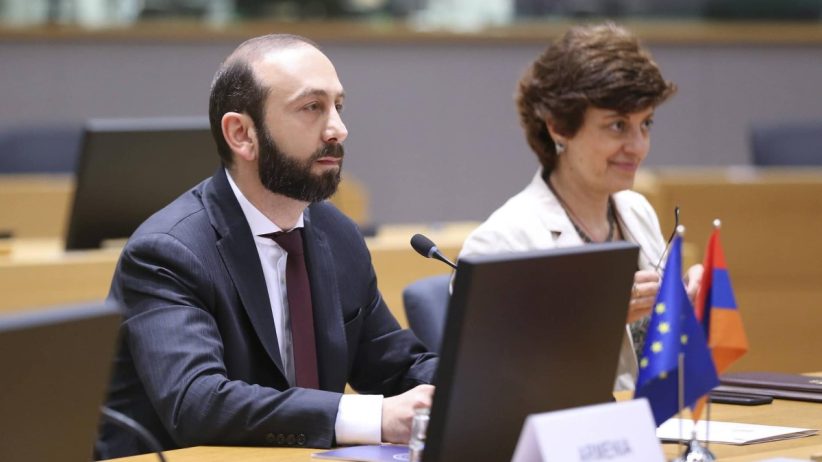 Armenian Foreign Minister Ararat Mirzoyan paid a visit earlier this week to Brussels, where he met with Josep Borrell, the European Commission’s vice president, for a session of the Armenia-EU partnership council.

Mirzoyan, Borrell, and other high-level EU officials discussed Armenia’s ongoing efforts to settle the Karabakh conflict and normalize relations with Azerbaijan and Turkey, as well as the implementation of the Comprehensive and Enhanced Partnership Agreement (CEPA) between Yerevan and Brussels, which came into force in March.

In Brussels, Mirzoyan reiterated that “so far we haven’t heard a positive reaction from Azerbaijan” to the six-point peace proposal Yerevan put forward to Baku last month, while also “stressing our readiness and our commitment to have peace and stability in our region.”

Ensuring the release of all remaining ethnic Armenians detained in Azerbaijan and the protection of Armenian cultural heritage sites that came under Azerbaijani control in 2020 are priorities for Yerevan, Mirzoyan said.

He added that “we expect that the European Union supports the peace process according to the mandate of the OSCE Minsk Group co-chairmanship,” referring to a body formed by the Organization for Security and Co-operation in Europe in the 1990s to encourage the peaceful resolution of the Karabakh conflict.

Armenia has consistently said it wants talks with Azerbaijan to be mediated by the Minsk Group, co-chaired by France, Russia, and the United States, but the recent collapse in relations between Russia and the West over Ukraine has thrown the group’s future in serious doubt.

Moscow has since questioned the group’s ability to function moving forward, accusing its co-chairs of “canceling” Russia’s role, while Paris and Washington have stressed that they remain committed to the organization.

Azerbaijan has also repeatedly rejected the involvement of the Minsk Group, arguing that its victory in the 2020 war in and around Karabakh renders the group’s mandate moot.

In turn, Brussels said it welcomed ongoing efforts in Armenia to implement CEPA and strengthen the country’s democratic system and “took note of Armenia’s willingness to start a visa liberalization dialogue with the EU.”

“We would be very pleased if a peace agreement was reached. We are in contact with both sides,” Borrell added. “We are still a long way away from that, but if it happens, the European Union will provide all possible support to implement an agreement.”

Mirzoyan’s visit to Brussels comes as much daylight seems to remain between Yerevan and Baku over the 5+6 peace proposal and the long-discussed joint border commission, even though both sides say they are ready to hold talks.

The 5+6 plan refers to five points put forward by Azerbaijan in March to form the basis of Karabakh peace talks, plus six points issued by Armenia in response last month.

Armenia says it accepts Azerbaijan’s five points, but felt the need to add six of its own because “those points do not address the whole agenda, the whole spectrum of existing issues,” as Mirzoyan has said.

At the same time, Aliyev accused Armenia of twice canceling scheduled meetings of the long-discussed joint border delimitation commission, which is still yet to convene.

“This is very disappointing,” he said. “Such an irresponsible position, of course, is worrying.”

Last month, Aliyev met with Armenian Prime Minister Nikol Pashinyan in Brussels, where the two leaders reportedly agreed to form a joint commission to delimit the border and ensure security along it.

The group has still not been set up, despite earlier pledges that it would be convened by the end of last month. The exact composition of the commission remains unclear as well.

The border between Armenia and Azerbaijan is officially undelimited and undemarcated, as it was once an internal Soviet boundary, meaning that officially defining it was not an issue of concern for the authorities at the time.

Aliyev went on to explain that Baku and Yerevan had previously reached agreements to convene a joint border delimitation commission on April 29 and May 7-11, only to have Armenia back out at the last minute.

In sharp contrast, Mirzoyan said earlier this week the commission had not yet met only because of “some technicalities to be agreed by the sides.”