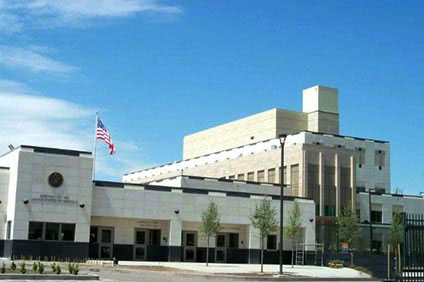 U.S. Ambassador to Armenia Lynne Tracy reiterated Washington’s commitment to encouraging Armenia’s democratization and helping Armenia and Azerbaijan come to a peaceful resolution in the Karabakh conflict in a wide-ranging, exclusive interview to Armenpress, Armenia’s state-run news agency. The interview was given late last month, but published Thursday.

Tracy confirmed that “it is U.S. policy that the status of Nagorno-Karabakh remains to be resolved,” adding that settling the conflict should be done “according to internationally recognized principles, including territorial integrity, self-determination of peoples, and the non-use of force.”

She underlined that Washington “recognizes the role of the population of Nagorno-Karabakh in deciding its future.”

“We continue to believe that the key to a peaceful, democratic, and prosperous future in the region is a negotiated, comprehensive, and sustainable settlement of all remaining issues related to or resulting from the Nagorno-Karabakh conflict,” she added.

Tracy repeatedly underscored Washington’s commitment to the Minsk Group, stressing that the United States “stands ready to engage bilaterally and with like-minded partners, including through our role as an OSCE Minsk Group Co-Chair.”

In addition, she said the United States supports efforts to normalize relations between Armenia and Turkey, noting that “it has long been and remains the position of the United States that normalization should take place without preconditions or linkage to any other issues, including the Nagorno-Karabakh negotiations.”

Turning to Armenia’s domestic affairs, Tracy emphasized that “the U.S. Embassy is committed to supporting Armenia’s democratic and economic reform agenda and partnering with Armenia to achieve its goals. Our support crosses many sectors.”

On his most recent visit to Washington earlier this month, Armenian Foreign Minister Ararat Mirzoyan met with Secretary of State Antony Blinken to relaunch the U.S.-Armenia Strategic Dialogue and sign a memorandum of understanding on civil nuclear cooperation.

A bird’s eye view of Azerbaijan’s incursions into Armenia