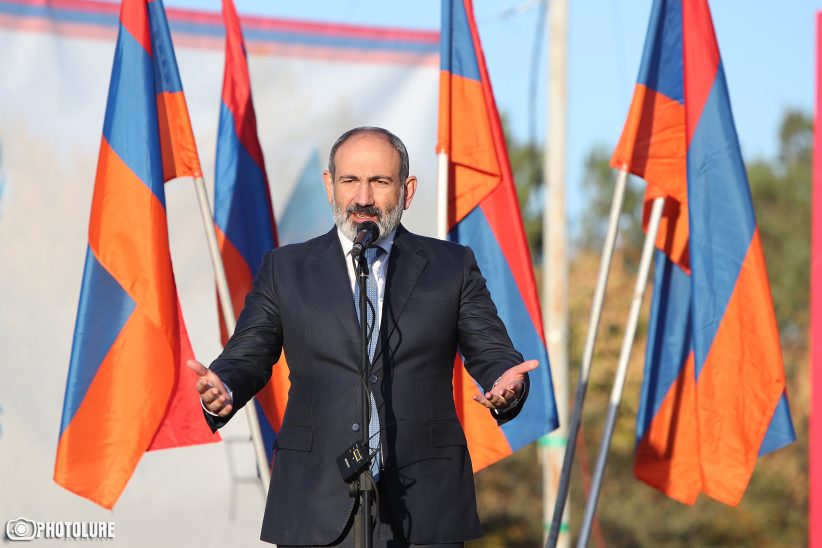 Armenia should take further steps to consolidate democratic gains made over the past few years and make efforts to encourage peace in the region, Prime Minister Nikol Pashinyan said Friday at the Armenian Forum for Democracy.

“Today, democracy is the most important factor to guarantee and preserve the sovereignty and independence of Armenia,” he said at the event, co-organized by Freedom House, a U.S. non-profit, and the Union of Informed Citizens, an Armenian NGO.

At the same time, anti-government protesters gathered outside of the hotel in downtown Yerevan where the forum was being held, chanting “Armenia without Nikol” and several other slogans. A heavy police presence secured the building.

Opposition lawmakers reportedly tried to enter the hotel, but were turned away.

Yerevan has seen over two weeks of daily anti-government protests, with thousands of people on the streets demanding that Prime Minister Nikol Pashinyan resign. The demonstrations have included public assemblies, marches, and acts of civil disobedience, as well as an indefinite sit-in at France Square, a major intersection in central Yerevan.

The surge in protest activity comes mainly in response to widespread concern that Pashinyan is preparing to cede Armenian control over Karabakh to Azerbaijan. The protesters, who have dubbed themselves the Resistance Movement, have preemptively rejected any deal with Azerbaijan that would see ethnic Armenians lose control over Karabakh.

The demonstrations have resulted in near-daily arrests, including hundreds of detentions of protesters this week alone, prompting criticism of the police’s disproportionate use of force from Armenian civil society groups and Human Rights Defender Kristinne Grigoryan.

Notably, Ambassador Tracy mentioned the ongoing demonstrations in Yerevan, expressing concern over the actions of both the police and the protesters.

She acknowledged photos and videos showing police using force to detain protesters and called on all such cases to be investigated, while adding that “the demonstrators also have an obligation to demonstrate peacefully” and in a way “that doesn’t create a chaotic situation and doesn’t violate the rights of others.”
Tracy and several other ambassadors stationed in Armenia have faced sustained criticism in recent days from the country’s political opposition, who have accused the diplomats of “silence” in the face of police brutality against protesters.

Pashinyan set to meet Aliyev in Brussels this weekend