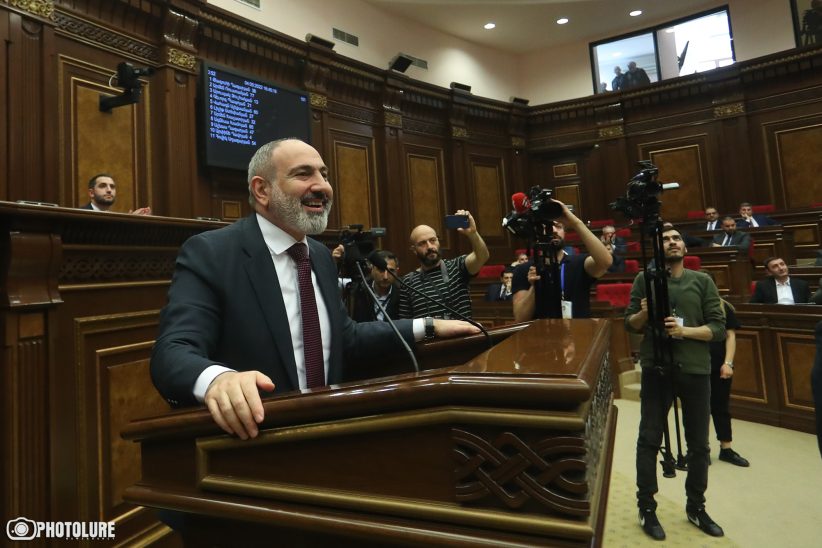 Armenian Prime Minister Nikol Pashinyan touched on several key points of contention in ongoing negotiations with Azerbaijan in an address to parliament Wednesday, just days after returning from Brussels, where he held talks with Azerbaijani President Ilham Aliyev for more than five hours.

Only lawmakers from the ruling Civil Contract party were in attendance, as opposition legislators have been boycotting parliamentary sessions for the past few weeks, raising the possibility that some representatives may be stripped of their mandates for excessive absenteeism once the current government session ends in mid-June.

Armenian prisoners of war in Azerbaijan

In his speech, Pashinyan underlined that “we are making every effort” to ensure the safe return of all remaining Armenian prisoners of war held in Azerbaijan, whom he said number 39. Most have been convicted in Azerbaijani courts, including some on charges of terrorism.

“Azerbaijan is constantly trying to link the return of our captives, hostages, and other detainees to additional conditions, but we do not agree with that position,” he said. “Our position remains that according to the November 9 trilateral statement, all detainees, prisoners of war, and hostages must be returned.”

November 9 refers to the date that Armenia and Azerbaijan signed a Russia-brokered ceasefire to end the 2020 war in and around Karabakh. One of the terms of that agreement is the exchange of “prisoners of war, hostages and other detained persons, and dead bodies.”

Roughly 150 Armenians detained in Azerbaijan have been released so far since the end of the war in late 2020.

In his address, Pashinyan said that he did not discuss the issue of Soviet-era enclaves at his Sunday meeting with Aliyev, but added that the issue will be resolved by the joint border commission formed earlier this week.

The fate of three Azerbaijani enclaves in Armenia and one Armenian enclave in Azerbaijan has emerged as a sticking point in ongoing border delimitation efforts, with each side pressing claims on the small pockets of territory.

Pashinyan repeated Yerevan’s argument that Baku has no legal grounds to claim three Soviet-era enclaves located entirely within Armenian territory, even though Armenia has the right to gain control over its one enclave in Azerbaijan.

It is highly unlikely that Armenia would willingly agree to cede control over the Azerbaijani enclaves in its territory, as vital interstate highways connecting Armenia with Georgia and Iran pass through them.

Pashinyan also broached the controversy that has broken out in Armenia and Karabakh over a recent statement from European Council President Charles Michel, who hosted the Armenian and Azerbaijani leaders over the weekend.

In his post-meeting read-out, Michel urged that “the rights and security of the ethnic Armenian population in Karabakh be addressed,” which some observers in Yerevan and Stepanakert viewed as an implicit recognition of Baku’s claims over the region.

In a column for CivilNet, noted Karabakh analyst Tigran Grigoryan argued that Michel’s “use of the term ‘Karabakh’ corresponds to Azerbaijan’s position,” noting that “after the end of the second Karabakh war, Baku declared that there is not even an administrative unit called ‘Nagorno-Karabakh.’”

Michel’s statement has prompted both the unrecognized republic’s legislature and president to issue statements lambasting the comments.

“No agreement has been reached” on the final status of Karabakh, Pashinyan told lawmakers, adding that Michel was simply trying to “express as many elements as possible from the positions of both sides.”

“Armenia considers that the Nagorno-Karabakh issue is not resolved,” Pashinyan reiterated.

Turning to domestic affairs, Pashinyan took Armenia’s political opposition to task for organizing ongoing acts of civil disobedience in Yerevan, saying that the political significance of the protests has been “exhausted,” with the demonstrators’ main goal just to create inconveniences for the public, like traffic jams.

“Usually the purpose of such actions is to involve the public in the process and to formulate a specific political demand,” he said. “But since it is obvious that that did not happen, those processes are now not against the government, but against the society.”

The Armenian capital has seen nearly three weeks of daily anti-government protests, with thousands of people taking to the streets to demand that Pashinyan resign. The demonstrators, who have dubbed themselves the Resistance Movement, have preemptively rejected any deal with Azerbaijan that would see Armenia lose control over Karabakh.

Ishkhan Saghatelyan, a senior opposition lawmaker who has emerged as the protest movement’s leader, announced Wednesday that opposition legislators plan to convene a special parliamentary session next week to lay out red lines for Armenia-Azerbaijan and Armenia-Turkey normalization efforts.
Saghatelyan has put forward seven points, including the right to self-determination for Karabakh’s Armenians and the need for Turkey to recognize the Armenian Genocide.

Erdogan’s expansionism and the West’s hypocrisy