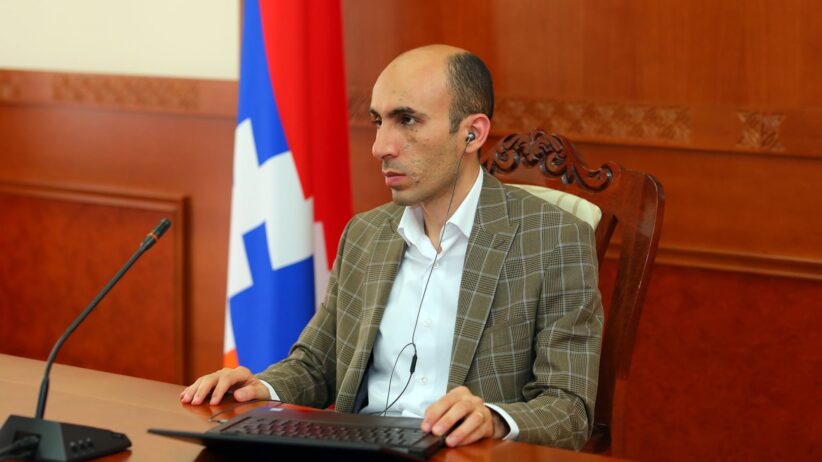 Karabakh State Minister Artak Beglaryan pledged to continue seeking international recognition for the self-proclaimed republic, called on the Russian peacekeeping contingent stationed in the region to stay indefinitely, and urged the European Union not to get involved in efforts to settle the Armenia-Azerbaijan conflict in a rare interview with Russian state media Friday.

The position of state minister was created in 2018 to replace the post of prime minister and is one of the highest-ranking positions in the unrecognized republic. Beglaryan has served in the role since last June.

Speaking with RIA Novosti, Beglaryan pledged to “continue efforts to achieve international recognition of the Republic of Artsakh,” using an alternative Armenian name for the region. He said that “it will be possible to consider the issue of the republic joining Armenia” only after Karabakh is recognized as an independent country on the world stage.

“Negotiations are underway with Armenia (and) contacts are being made on the issue of recognizing Nagorno-Karabakh’s independence, but at present, there is not yet progress on this issue,” he added.

The Armenian government has not previously given any indication that recognizing Karabakh’s independence was on the table, despite the extremely close ties between Yerevan and Stepanakert.

Beglaryan also expressed serious doubts about the ability of ongoing negotiation efforts between Armenia and Azerbaijan — which have made next to no progress so far — to resolve the Karabakh conflict.

“For the foreseeable future, a comprehensive settlement of the Nagorno-Karabakh issue seems impossible, since there are serious contradictions in the positions of Artsakh and Azerbaijan — they are diametrically opposed,” he said.

“At present, there is an urgent need for the presence of Russian peacekeepers in Karabakh,” Beglaryan continued. “We believe that the peacekeeping contingent should remain here indefinitely, since the conflict has not been resolved.”

As of now, the peacekeepers’ mandate in the region expires in November 2025. Under the 2020 ceasefire agreement, the mandate will be automatically extended every five years unless Baku or Yerevan decides to terminate it. There are widespread fears in Armenia that Azerbaijan will not allow the peacekeepers to remain in Karabakh past 2025.

He also criticized the EU’s growing role as a mediator between Yerevan and Baku, saying that “the issue of settling the Karabakh conflict should not become a subject of negotiations for the EU” and “part of the current difficult relations between Russia and the West.”

Armenia to ban cash transactions for property and vehicle purchases