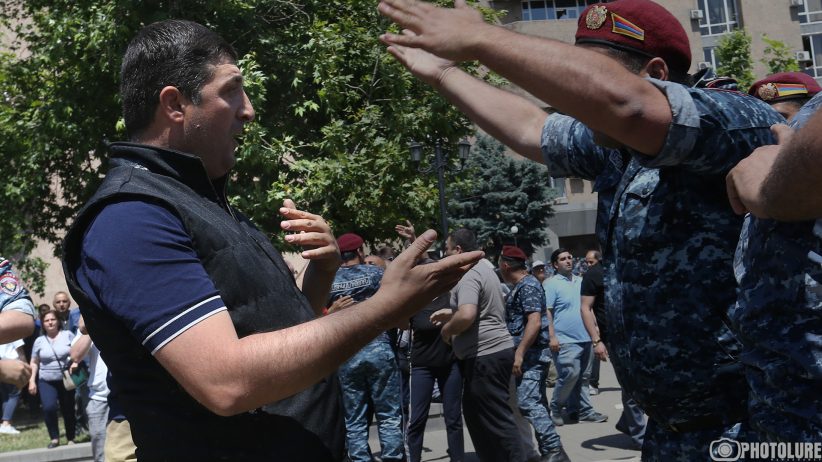 Anti-government protests in Yerevan have entered their second month, after the weekend saw 60 people hospitalized and hundreds detained in some of the most violent clashes between protesters and police officers in Armenia in recent memory.

On Friday evening, thousands of demonstrators calling for Prime Minister Nikol Pashinyan’s resignation marched toward his official residence in central Yerevan, where they were met with hundreds of riot police forming a human chain to block a nearby intersection.

Several protesters then approached the police line in an attempt to break through, prompting scuffles to break out. Video footage from the ensuing clashes appeared to show officers beating and violently detaining demonstrators and using stun grenades on the crowd, while protesters looked to be throwing stones, bottles, and other heavy objects at the police.

Each side has blamed the other for provoking and initiating the clashes.

The next day, Armenia’s Investigative Committee arrested 13 people and opened a criminal case against them on charges of organizing and participating in mass disturbances.

Of the 60 people hospitalized, 39 were police officers, according to the Health Ministry. The vast majority were treated for minor injuries and discharged by the next morning.

Earlier Friday afternoon, the opposition failed to convene a special parliamentary session, with representatives from the ruling Civil Contract party boycotting it in order to deny a quorum. Armenian law stipulates that the majority of lawmakers must be present in order to hold a vote.

Opposition politicians had planned to push the assembly to adopt a resolution rejecting any agreement with Azerbaijan that would allow it to gain control over Karabakh. It also laid out several other red lines for normalization talks with Azerbaijan and Turkey, which remain ongoing.

Opposition lawmakers themselves have largely been boycotting parliamentary sessions for the past month, raising the possibility that some of them may be stripped of their mandates for excessive absenteeism once the current government session ends later this month.

Yerevan has seen near-daily protests for over a month now, with thousands of people taking to the streets, largely over concerns that Pashinyan is preparing to recognize Azerbaijan’s claims over Karabakh as a part of a normalization deal. The demonstrators have preemptively rejected any agreement with Azerbaijan that would see ethnic Armenians lose control over Karabakh.

According to official figures, police officers have so far detained over 2,100 protesters for taking part in marches, public assemblies, and acts of civil disobedience.

On Sunday evening, opposition lawmaker Ishkhan Saghatelyan, who has emerged as the protest movement’s leader, questioned the official tally, saying the real number is closer to 2,500. He did not back up his claim.

The police have faced sustained criticism from Human Rights Defender Kristinne Grigoryan for alleged acts of misconduct, including instances of disproportionate use of force.