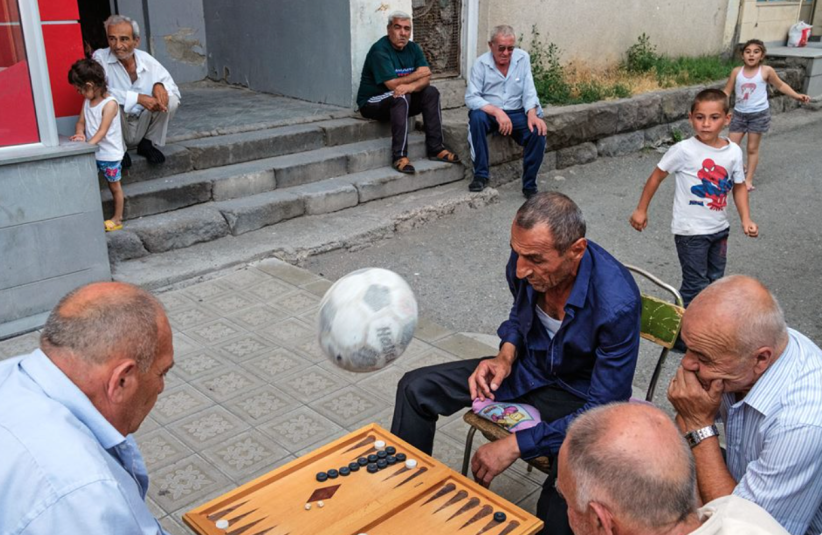 Starting off this round-up with a photo that, if you have spent any time on social media in the past week you’ve probably seen – multiple times! People couldn’t get enough of speculating what happened in the seconds that followed this photograph.

The very same day, a photo from the Ambassador of the EU to Armenia had its own moment of bringing us a slice of Yerevan life through imagery.

Do you recall how a few round-ups ago we brought to you the numerous ways Armenia kept appearing in the news in relation to Russia’s war in Ukraine. Though the flood of falsehoods has subsided, some believe because Turkey and Azerbaijan were warned that their attempts to force Armenia deeper into Russia’s hold were not in their own interests, an Armenian-adjacent tweet once again went viral in relation to Russia. Paul Massaro of the U. S. Helsinki Commission invited an uproar when he tweeted the following:

The seemingly favorable appraisal of what Ataturk did for Turkey – which included vast ethnic cleansing throughout the empire of Armenian, Greeks, and many other groups, as the solution to Russia’s problems raised a lot of eyebrows to say the least.

Swedish Journalist Rasmus Canback has continued to delve deeper into connections between the Swedish Foreign Ministry and Azerbaijan, particularly important because Foreign Minister Ann Linde became chairman of the OSCE not long after the 2020 Nagorno-Karabakh ceasefire and was in charge of peace negotiations. As you can see however, he’s been met with quite a few redactive blocks. Despite that, he was able to discover some details about the post-war negotiations which had not been previously public.

Something else to note on the conflict, up until now Germany’s Ambassador to Azerbaijan had not made a visit to the town of Shushi, visits to which by foreign dignitaries have been used by Azerbaijan to signal international acceptance of the war operation which allowed it to seize it. The Minsk Group co-chair ambassadors have not visited by design, though ambassadors from many others have. Germany’s language bringing up the return of all refugees regardless of ethnicity is rather unusual for such an Azerbaijani government photo-op, as most completely ignore the ethnic cleansing of Armenians from the region.

In Armenia, the past weeks have seen street protests which did result in injuries on Friday night. That night was also the opening of the annual and wildly popular “Wine Days” festivities just a few blocks away. Add into that strange dichotomy hundreds of Irish fans who had arrived for an upcoming football match, not to mention the thousands of Russians who currently call the city home, and the atmosphere was quite an unusual one.

One of the incoming planes of Ireland fans made quite an entrance to Yerevan. Having gotten up a great deal of “liquid confidence”, along with the typical bluster of any football fan, the consensus on social media was that the Armenian team would be utterly destroyed. What is the old saying about not underestimating your opponent though?

Though the team is now without superstar Henrikh Mkhitaryan after his retirement from international play, FC Krasnodar’s Eduard Spertsyan is a recent addition who is turning heads. He scored the match’s only goal, one which was so stunning and powerful it left fans in awe, with Fox Sports calling it “ridiculous” in admiration.

It propelled the Armenian team to a win, and left Irish fans on social media demanding refunds for their compatriots who crossed the continent just to see their team disappoint them so badly. Despite that, the tweets of visiting fans seems to show they had a great time enjoying Yerevan’s pubs and nightlife anyway, so let’s call it a win for all.

Worth a watch is Michigan state representative Mari Manoogian reciting The Lord’s Prayer (Hayr Mer) in Armenian to open the day’s session.

We love whenever a social media post highlights the legacy of Armenians in far-flung and unexpected places, and we’ve brought you quite a few over the course of these round-ups. The latest one is about the discovery of mysterious carvings discovered over a century ago in Balochistan, now part of Pakistan, which turned out to be Armenian letters.