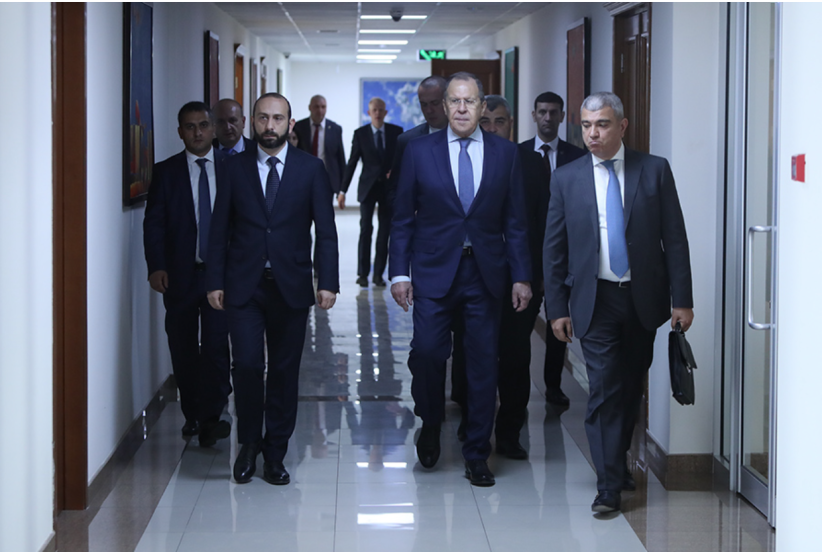 Armenian and Russian Foreign Ministers Ararat Mirzoyan and Sergey Lavrov reiterated their governments’ readiness to work toward settling the Karabakh conflict at a press conference in Yerevan Thursday, following a private meeting.

Mirzoyan told reporters his discussions with Lavrov focused on ongoing normalization efforts between Yerevan and Baku, calling the talks “constructive and sincere.”

He added that “addressing the Nagorno-Karabakh conflict is vital, which will include the key points on ensuring the security and all rights of the people of Artsakh and determining the final status of Nagorno-Karabakh.”

In turn, Lavrov said that Yerevan and Moscow “have a common perception that the process moves forward,” stressing he was “sure that there is no other way than the complete normalization of the relations.”

Mirzoyan specifically pointed to ongoing efforts on unblocking transport connections in the region, which both Yerevan and Baku agreed to in a Russia-brokered ceasefire, as an example of positive movement in the negotiations, even though the border remains closed for now.

Lavrov too touched on the unblocking issue, underscoring that opening transport connections “will be based absolutely on the sovereignty of the territory of Armenia.”

Baku has repeatedly pushed for Yerevan to open a “corridor” to connect mainland Azerbaijan with the Nakhichevan exclave as part of any unblocking agreement. The Armenian government has rejected that terminology, arguing it implies Azerbaijani government control over the passage.

At the press conference, Mirzoyan also reaffirmed Yerevan’s desire for the Minsk Group to play a mediating role in its negotiations with Baku, noting it is the only international body with a mandate to settle the Karabakh conflict.

The Minsk Group is an organization co-chaired by France, Russia, and the United States that is tasked with mediating a peaceful resolution to the Karabakh conflict.

It has been beset in recent months with serious internal tensions, throwing its ability to resolve the conflict in serious doubt. Moscow and Baku have both questioned the Minsk Group’s ability to function moving forward, while Paris, Washington, and Yerevan have all stressed they remain committed to the body.

In addition, Mirzoyan and Lavrov discussed the activities of the Russian peacekeeping contingent stationed in and around Karabakh, both affirming their belief in the peacekeepers’ ability to resolve regional issues.

Calling the peacekeepers “a factor to prevent provocations and ensure the security of the people of Artsakh,” Mirzoyan said that he saw a role for the peacekeepers in resolving ongoing tensions with Azerbaijan over the villages of Parukh and Khramort.

In March, Azerbaijani troops moved into those two Karabakh villages, which are technically under the control of Russian peacekeepers, displacing several hundred Armenian residents.

Lavrov said that “de-escalating the situation” in Parukh and Khramort is a priority for Russia, adding that “these issues will be studied and resolved within the framework of work,” referring to ongoing talks to delimit the Armenia-Azerbaijan border that so far have had no tangible results.

Turning to the issue of Armenia-Turkey normalization efforts, Mirzoyan accused the Turkish government of continuing to link normalization with the settlement of the Karabakh conflict, a position he called “not constructive.”

Past attempts to normalize relations between Armenia and Turkey fell apart in large part due to Ankara’s refusal to decouple normalization from the Karabakh conflict, as well as Baku’s fierce opposition to the efforts.

Before arriving in Yerevan, Lavrov met with Turkish Foreign Minister Mevlüt Çavuşoğlu in Ankara to discuss Turkish efforts to restart peace talks between Russia and Ukraine. The two officials talked about ongoing normalization efforts between Armenia and Turkey as well.

Following his talks with Mirzoyan, Lavrov had meetings scheduled with Armenian Prime Minister Nikol Pashinyan and President Vahagn Khachaturyan. It is Lavrov’s first official visit to Armenia in over a year.

Breaking down Aliyev’s lies and manipulations