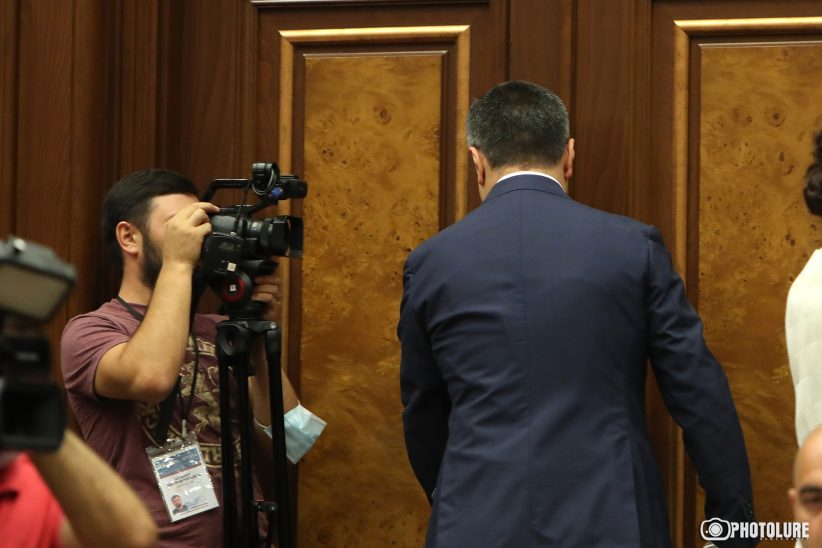 Artur Vanetsyan, a leading opposition lawmaker in Armenia’s parliament, announced his resignation Tuesday, writing on Facebook that the legislature had “ceased to be an effective platform for achieving the goal” of ousting Prime Minister Nikol Pashinyan.

Calling the actions of Pashinyan’s administration “destructive” and warning that “today we stand on the verge of losing our fatherland,” Vanetsyan pledged to continue participating in ongoing anti-government protests in Yerevan.

Vanetsyan had repeatedly said he would resign if the demonstrations failed to oust Pashinyan. Protest organizers last week ended a monthlong blockade of one of central Yerevan’s main intersections, but said they would continue holding rallies indefinitely until Pashinyan resigns.

Yerevan has seen nearly-daily protests for over a month now, with thousands of people taking to the streets demanding that Pashinyan resign, largely out of concern that he may be preparing to recognize Azerbaijan’s claims over Karabakh as a part of a normalization deal.

Dubbing themselves the Resistance Movement, the demonstrators have preemptively rejected any agreement with Azerbaijan that would see ethnic Armenians lose control over Karabakh.

Vanetsyan, in fact, initiated the surge in protest activity in mid-April, when he began holding an indefinite sit-in in downtown Yerevan.

A number of other opposition lawmakers face the possibility they may be stripped of their mandates for excessive absenteeism once the current government session ends this month.

Before joining the opposition, Vanetsyan was a close ally of Pashinyan and played a key role in his government, leading the National Security Service from 2018 to 2019. Vanetsyan resigned from his post in circumstances that remain murky. In the immediate aftermath of the signing of a ceasefire between Armenia and Azerbaijan in November 2020, Vanetsyan was arrested on two separate occasions, the first on charges of “illegal conduct of rallies,” the second on allegations of “usurping power.” In each case, the court ruled that Vanetsyan’s arrest was unlawful and released him from detention.

In legislative elections last year, the I Have Honor alliance, led by Vanetsyan, entered parliament with about 5% of the vote, netting seven seats in the 107-member body.

30,000 foreigners have settled in Armenia since Ukraine War, according to official Yerevan