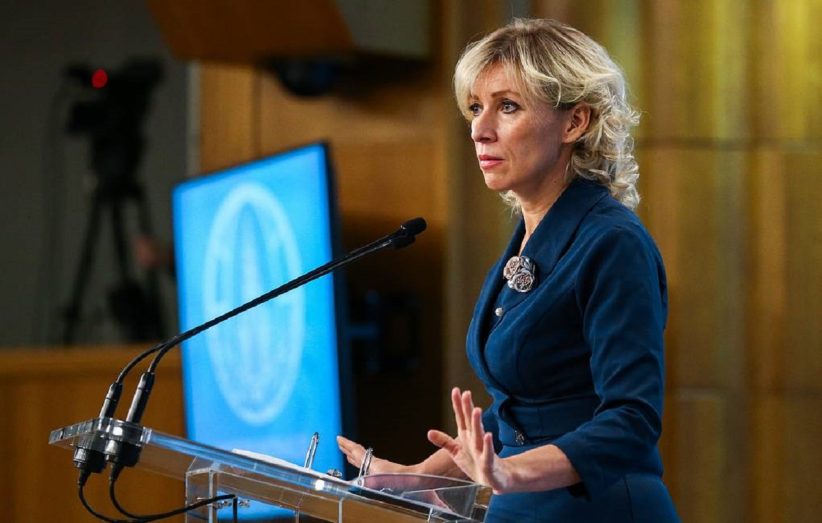 Zakharova told journalists gathered for her weekly press conference she “doubts the sincerity” of a recent statement by U.S. Assistant Secretary of State Karen Donfried reaffirming Washington’s commitment to the Minsk Group.

“If Washington and Paris had really appreciated the unique mediation format of the Minsk Group, they would not have ignored that mandate…and would not have deliberately stopped contacts with the Russian co-chair on February 24 without any consultations,” she said, referring to the start of Russia’s invasion of Ukraine. “This caused irreparable damage.”

The Minsk Group is a body co-chaired by France, Russia, and the United States that is meant to mediate a peaceful resolution of the conflict between Armenia and Azerbaijan.

Rising international tensions over Ukraine have cast serious doubt on the group’s ability to function, with Russia accusing France and the United States of refusing to cooperate via Minsk Group channels since the invasion began, claims that Paris and Washington have denied.

For their part, French and U.S. officials have reaffirmed their countries’ commitment to resolving the Armenia-Azerbaijan conflict through Minsk Group mediation, but have also ducked questions from journalists asking if they are intentionally freezing Russia out.

Amid the apparent breakdown at the Minsk Group, the European Union has sought a greater mediating role between Armenia and Azerbaijan, a shift that Washington has welcomed but that Moscow has said amounts to interference.

In a recent column for CivilNet, prominent Karabakh analyst Tigran Grigoryan struck a pessimistic tone on the Minsk Group’s future, arguing that “if the current trends in West-Russia relations do not change, Moscow will make neutralizing Western influence in the South Caucasus its main goal.”

Still, Zakharova said Wednesday, Russia supports ongoing normalization efforts between Yerevan and Baku, calling for the “intensification of the activities” of a joint working group on unblocking regional transport connections.

“The Russian side will continue providing close assistance to this process,” she pledged.

That group, co-chaired by Armenia, Azerbaijan, and Russia, convened on Monday in St. Petersburg to continue talks, but no information has been made publicly available on what the discussions entailed.

The November 2020 ceasefire declaration signed by Armenia and Azerbaijan and brokered by Russia includes a commitment to unblocking “all economic and transport connections in the region,” but nothing has come of it so far.

Russia also supports the work of an Armenian-Azerbaijani joint commission to delimit the border, Zakharova said, confirming that “we are ready to host” such a meeting “in the very near future.”

Asked by reporters about the death of an Armenian soldier over the weekend, reportedly in a shoot-out with Azerbaijani troops along the border, Zakharova said that such “recurrent incidents…confirm the relevance and necessity” of border delimitation.

Yerevan and Baku officially formed the border commission last month, but so far no progress has been made on that issue either.

Russian Foreign Minister Sergey Lavrov is currently on an official visit to Azerbaijan, where he is slated to meet with Azerbaijani President Ilham Aliyev to discuss normalization efforts with Armenia.

US and France have caused damage to Karabakh negotiation group, says Kremlin official