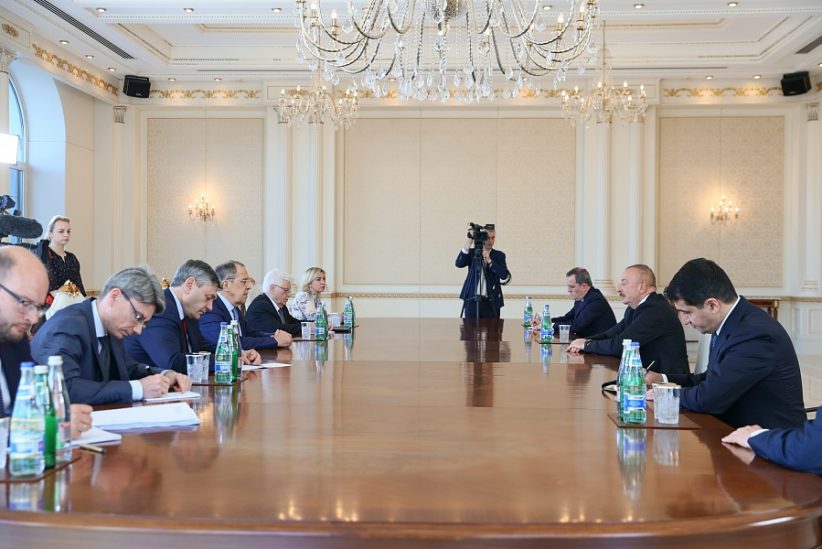 Russian Foreign Minister Sergey Lavrov on Friday once again blamed co-chairs France and the United States for allegedly freezing Russia out of the Minsk Group, saying the Kremlin is ready to facilitate a peace treaty between Armenia and Azerbaijan on the basis of Russia-brokered declarations and statements.

Speaking alongside his Azerbaijani counterpart in Baku, Lavrov said the Minsk Group “ceased its activities on the initiative of the American and French participants” in a strong echo of comments made earlier this week by Russian Foreign Ministry spokeswoman Maria Zakharova.

Continuing, Lavrov said the Minsk Group’s work had also been “overtaken by events” in 2020, referring to that year’s war in and around Karabakh, which saw Azerbaijan score a decisive military victory against Armenia.

Lavrov added that “the three declarations that the leaders of Russia, Azerbaijan, and Armenia signed are now recognized by everyone as the basis for movement to finally close the existing issues” between Yerevan and Baku.

At a meeting with Azerbaijani President Ilham Aliyev the day before, Lavrov said Russia was “ready to support in every possible way the implementation of the three documents,” as well as to help facilitate a peace treaty between Armenia and Azerbaijan.

Lavrov was referring first to the ceasefire declaration that ended large-scale hostilities between Yerevan and Baku after the 2020 Karabakh war, and second to a joint statement forming a working group to unblock regional transport connections. A follow-up statement, the third document Lavrov mentioned, reaffirmed the sides’ commitment to the previous two agreements.

In particular, Lavrov told Aliyev Russia will “support the work” of unblocking transport connections “until a result is achieved” and offered to “provide consultative services” to a separate working group on delimiting the Armenia-Azerbaijan border. Unlike the transport group, the border commission is a bilateral effort between Yerevan and Baku.

In contrast, Aliyev struck a slightly less optimistic tone at his meeting with Lavrov, reiterating that Baku’s “position is aimed at establishing long-term peace in the region,” but also calling out Yerevan for failing to respond to “our proposal to start work on a peace agreement.”

Aliyev also laid blame on Armenia for the fact that transport routes between the two countries have yet to be opened, calling unblocking “a legal obligation for the Armenian side.”
In addition, Lavrov and Aliyev both hailed the February signing of a “declaration on allied cooperation” between Moscow and Baku, committing to deepening their countries’ partnership in diplomacy and trade.