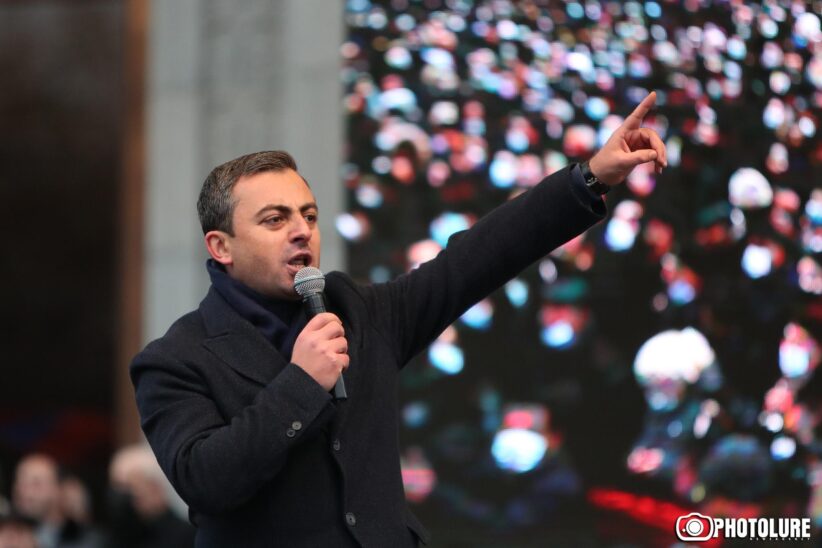 Armenia’s ruling Civil Contract party began the process of removing two prominent opposition leaders from their positions in parliament on Tuesday for excessive absenteeism, but decided not to dismiss them from the body entirely.

If the majority of lawmakers vote in favor of the motion, Ishkhan Saghatelyan will lose his position as deputy speaker, while Vahe Hakobyan will be removed as the head of the economic affairs committee.

Both Saghatelyan and Hakobyan represent the Armenia Alliance, an opposition bloc of 29 lawmakers. Civil Contract currently holds 71 out of 107 seats in the National Assembly, Armenia’s one-chamber legislature.

It remains unclear when exactly the vote will be held.

Saghatelyan has emerged in recent months as one of the most visible leaders of the Resistance Movement, an ongoing protest campaign that aims to force Prime Minister Nikol Pashinyan’s resignation.

Saghatelyan, Hakobyan, and several dozen other opposition representatives have been boycotting parliamentary sessions since April, instead participating in near-daily anti-government demonstrations.

That has raised the possibility they may be stripped of their mandates for excessive absenteeism once the current legislative session ends this month. Alen Simonyan, the parliament speaker and a close Pashinyan ally, first floated the idea publicly last month.

Under Armenian law, legislators can be stripped of their mandate if they skip more than half of the votes held during one legislative session, but that requires approval from the Constitutional Court. In contrast, removing lawmakers from their leadership posts, as Civil Contract is now posed to do, requires only a majority vote in parliament.

Armenian parliamentary rules say that Saghatelyan must be replaced by another lawmaker from the opposition if he is removed as deputy speaker, but it remains unclear who exactly that may be.

If Hakobyan is dismissed from the economic affairs committee, he will be replaced by the committee’s deputy chair. That post is currently held by Babken Tunyan, a lawmaker from the ruling Civil Contract party.

“The authorities did not give us mandates so that they could also take them away. The Armenian nation gave us our mandates. 270,000 citizens gave their vote to the Armenian Alliance with a specific goal and agenda,” Saghatelyan said in response to the news.

“In no case can the authorities stop my struggle against them,” Hakobyan added.

In a separate development last week, Artur Vanestyan, a lawmaker from a different opposition bloc and another prominent figure in the Resistance Movement protests, resigned from parliament, saying it had “ceased to be an effective platform” for opposing the government.