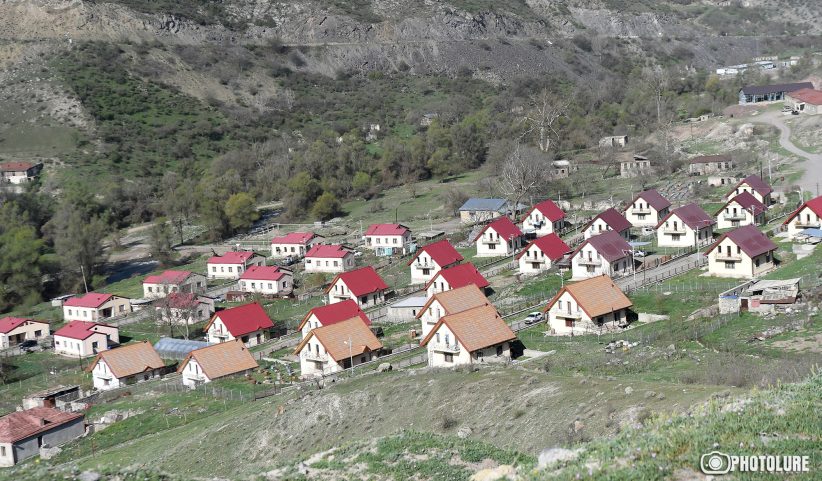 Karabakh President Arayik Harutyunyan said Thursday that negotiations to keep the village of Aghavno under Armenian control “continue,” days after Armenian Prime Minister Nikol Pashinyan announced that both Aghavno and the town of Berdzor (Lachin) “will pass to Azerbaijan’s control” once a new road bypassing them is built.

Officials in both Yerevan and Stepanakert also stressed that they remain in close contact with one another on the issue of the Lachin corridor, the strategically vital strip of land in which both Aghavno and Berdzor are located.

The corridor surrounds a road patrolled by Russian peacekeepers that, at present, connects Armenia with the part of Karabakh that remains under Armenian control.

The ceasefire that ended the war stipulates that a new road should be built to connect Armenia and Karabakh that bypasses Aghavno and Berdzor, the Armenian communities that remain within the Lachin corridor.

Once that alternative route is completed, Azerbaijan is meant to take control of those communities, and Russian peacekeepers are supposed to relocate to the new passage.

Azerbaijan has taken the lead on the construction, and the head of the country’s roads agency said earlier this year that he expects most of the new route to be ready by the end of next month, well ahead of the three-year timeline set in the ceasefire.

Speaking to lawmakers in Stepanakert Thursday, Harutyunyan partially confirmed Pashinyan’s comments, saying “we must leave Berdzor,” but added that “we will continue our negotiations, our fight” to keep control of Aghavno, a village of about 170 people.

Harutyunyan said that several proposals for the new route had been put forward in negotiations with Azerbaijan and Russia, and that Armenia, in consultation with the authorities in Karabakh, had “chosen (what was) in our opinion, the best option.” The new road, he said, “will be much safer.”

CivilNet’s Stepanakert team visited Aghavno and Berdzor earlier this week to speak with residents about the prospect of a handover. Residents largely struck a defiant note, pledging to stay, just as they did when CivilNet reporters went to Aghavno in the immediate aftermath of the war.

“The whole village, young and old, will tell you that we’re staying, we’re not leaving,” said one Aghavno resident, Anna Harutyunyan.

Meanwhile in Yerevan, Armen Grigoryan, the head of Armenia’s Security Council, underscored that “Armenia has been discussing the issues of Berdzor and Aghavno with our partners in Artsakh (Karabakh) since” the end of the 2020 war.

“We still have time to find solutions, both on the issue of the road, and for the residents. We have about one and a half years. We will work with the government of Artsakh and find solutions,” he said.

The issue of the Lachin corridor is separate from efforts to establish an overland route through Armenia’s Syunik region to connect mainland Azerbaijan with the Nakhichevan exclave, which is also stipulated in the ceasefire.

On Wednesday, the well-known Russian newspaper Izvestia cited information from an unnamed, “high-ranking, informed source,” who said that Armenia and Azerbaijan had come to an agreement on the vast majority of that route.

On Thursday, Grigoryan reiterated Yerevan’s position that the route should not have the status of a corridor, which implies that Armenia would not have control over the road or be able to set up checkpoints along it.

The ceasefire says the road should be controlled by Russian border guards. The report in Izvestia uses the term “Zangezur corridor” to describe the passage.

Artsakh will be without gas for one week