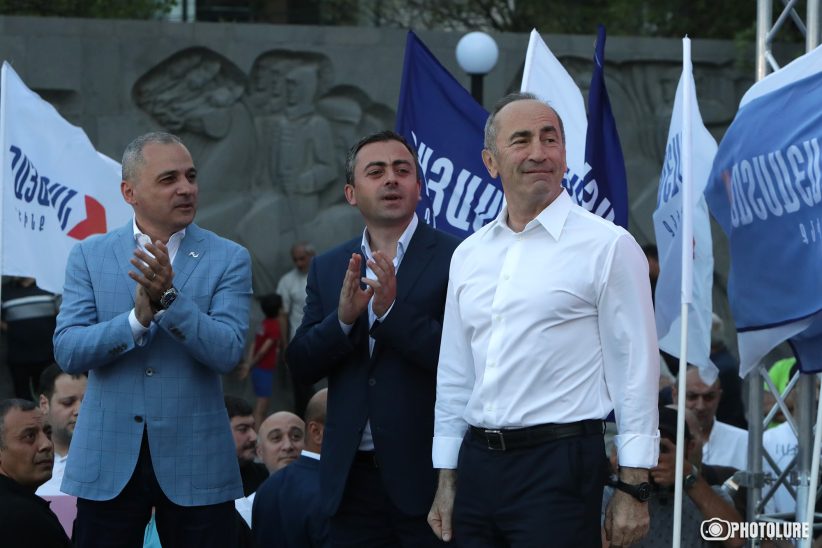 Armenia’s parliament voted 66-0 at a special session Friday to remove two prominent opposition deputies from their leadership positions for excessive absenteeism. Lawmakers voted by secret ballot to remove Ishkhan Saghatelyan as deputy speaker and Vahe Hakobyan as head of the economic affairs committee.

All 66 votes came from the ruling Civil Contract party, which has a total of 71 members in the 107-seat National Assembly. Saghatelyan and Hakobyan are both from the Armenia Alliance, an opposition bloc of 29 members.

The two opposition blocs in parliament, the Armenia Alliance and the I Have Honor Alliance, released a joint statement shortly after dismissing the vote and rebuking the government.

“For us, administrative positions in the National Assembly are not ends in themselves, they are a tool to support opposition activities,” the statement read. “The situation is absurd in that it is being done to distract the public from the existing security issues.”

Saghatelyan has emerged in recent months as one of the most visible leaders of the Resistance Movement, an ongoing protest campaign that aims to force Prime Minister Nikol Pashinyan’s resignation.

Saghatelyan, Hakobyan, and several dozen other opposition deputies have been boycotting parliamentary sessions since April, instead participating in near-daily anti-government demonstrations.

That raised the possibility they may be stripped of their posts or mandates for excessive absenteeism. Civil Contract ultimately decided to remove Saghatelyan and Hakobyan from their leadership positions, but did not go so far as to expel them from parliament.

Under Armenian law, deputies can be stripped of their mandates if they skip more than half of the votes held during one legislative session, but that requires approval from the Constitutional Court. In contrast, removing lawmakers from their posts requires only a majority vote in parliament.

Hakobyan will be replaced by the committee’s deputy chair, a post currently held by Civil Contract lawmaker Babken Tunyan.

However, it remains unclear who will now take up the role of deputy speaker. Parliamentary rules say Saghatelyan should be replaced by another opposition lawmaker, but he explicitly ruled that out Friday, telling Radio Azatutyun that “naturally, we will not nominate a candidate.”

“What’s more,” he added, “our colleagues will probably give up the other administrative positions that the opposition holds.”

Before Friday, opposition deputies headed two other standing committees in parliament: the regional and Eurasian integration committee, led by Armen Gevorgyan, and the human rights and public affairs committee, led by Taguhi Tovmasyan.

Shortly after the vote, Gevorgyan said on Telegram he would resign from his committee as a result of “political events in the country.” Tovmasyan has not publicly commented on her plans, as of Friday afternoon local time.

Berdzor will be handed to Azerbaijan in accordance with ceasefire statement