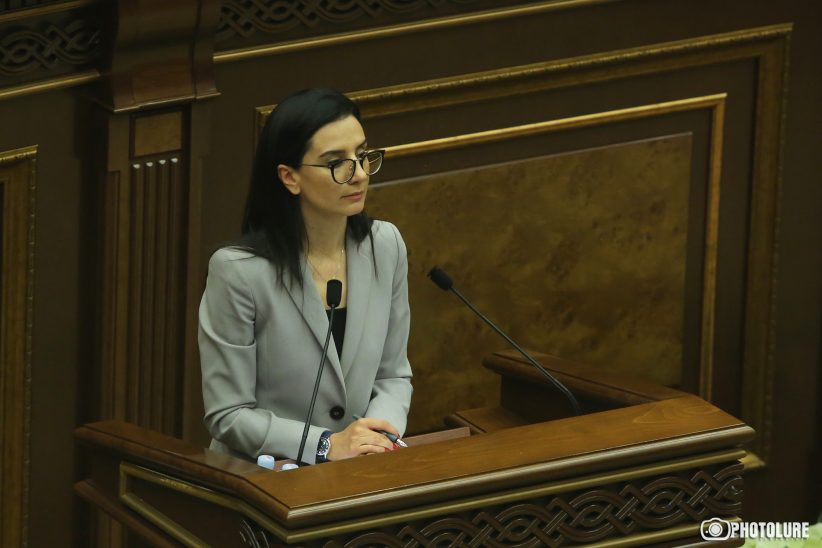 At present, there is only one woman in the cabinet, Health Minister Anahit Avanesyan, and one woman governor, Nazeli Baghdasaryan of the Shirak region. Just 37 out of 107 lawmakers are women, and it remains rare for women to be elected to political positions at the local level. The country has never had a woman president or prime minister.

“I was not only in favor (of Vardapetyan’s nomination), but I also welcomed it,” Zaruhi Batoyan, a Civil Contract lawmaker, told CivilNet by phone. “Women should have equal opportunities, treatment, and chances for advancement…Thanks to these types of examples, women and young girls see that they can” rise to high-ranking roles.

Batoyan, whose prior job as labor and social affairs minister made her one of the few women to serve in Pashinyan’s cabinet, said she believed the quota system for women’s participation in parliament “will gradually give qualitative results,” despite “technical problems” with the arrangement.

The quota system Batoyan mentioned refers to a 2016 change to the electoral code that came into force last year and requires all political parties to put forward electoral lists with women and men each accounting for at least 30% of the candidates.

“The other task is political will,” Batoyan added. “It is important that political parties set goals and encourage women. If there are two or three or more candidates for this or that position who have equal knowledge and skills, women should be given preference for that position. I think this could be one of the solutions.”

While Vardapetyan’s appointment has, for many, highlighted still-unresolved issues around women’s representation in Armenian politics, her nomination has also proved controversial, with critics expressing concerns over what her close ties with Pashinyan will mean for her independence.

Her appointment comes amid a major scandal over apparent government pressure on the former head of the Supreme Judicial Council, a powerful body that oversees the courts.

Critics have also raised the issue that Vardapetyan, a former deputy justice minister, has no prior prosecutorial experience and has mostly refused to answer questions from the press since her nomination was announced last month.

She became the focus of widespread media attention last year when a local news site published what it claimed was evidence of her interfering in a criminal investigation into fugitive businessman Ruben Hayrapetyan. Hayrapetyan is close to the Republican Party, which Pashinyan ousted from power when he became prime minister in 2018.

Vardapetyan has since been cleared of any wrongdoing in the case, and she has largely refrained from commenting publicly on the matter.

Her appointment required approval by a simple majority in parliament. Only lawmakers from the ruling Civil Contract party were present at the vote, but the party had enough representatives to push Vardapetyan through without any support from the opposition. The opposition has been boycotting legislative sessions since April.

Vardapetyan will take her new post in September, when the six-year term of the current prosecutor general comes to an end.

With additional reporting by Lia Avagyan

Russia and Canada in war of words over Armenia embassy