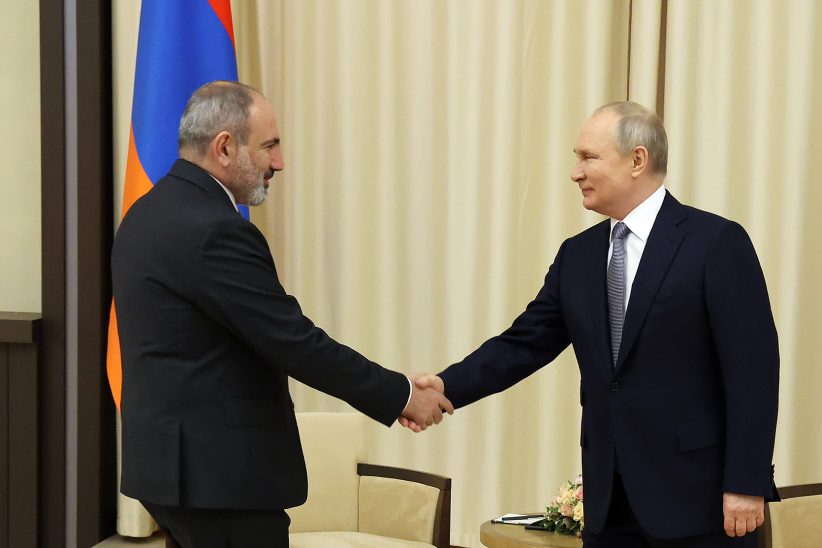 According to an Armenian government read-out, Pashinyan and Putin also talked about “the implementation of the tripartite declarations” and ongoing work to delimit the Armenia-Azerbaijan border and reopen transport connections between the two countries.

The term “tripartite declarations” refers to three statements signed by the leaders of Armenia, Azerbaijan, and Russia aimed at establishing peace in the region.

The first is the ceasefire declaration that ended large-scale hostilities between Armenia and Azerbaijan after the 2020 war in and around Karabakh. The second is a statement forming a joint working group to unblock regional transport routes. The third is a follow-up reaffirming the sides’ commitment to the previous two statements.

Notably, the Russian summary added that the call was made “on the initiative of the Armenian side” and included a discussion of efforts “aimed at normalizing relations between Armenia and Turkey,” details left out of the Armenian version.

Putin also spoke about “issues related to the Karabakh settlement” with Azerbaijani President Ilham Aliyev last week on the sidelines of a summit in Turkmenistan, the Kremlin has said.

Putin’s talks with the Armenian and Azerbaijani leaders come amid what appears to be accelerating diplomacy in the region.

The well-known Russian newspaper Izvestia reported last week that Armenia and Azerbaijan have nearly come to an agreement on an overland route connecting mainland Azerbaijan to Nakhichevan via Armenia, citing exclusive information from an unnamed “high-ranking, informed source.”

Also last week, Armenia and Turkey announced they would be partially opening their border and launching air cargo shipments “at the earliest possible date,” marking the biggest breakthrough in relations in many years.

Pashinyan said at a cabinet meeting Thursday that government officials should start preparing to work with their Turkish counterparts to implement those agreements.

Ruben Rubinyan, Armenia’s chief negotiator with Turkey, told CivilNet in an interview last week that “Armenia is ready to have open borders and diplomatic relations with Turkey at any time,” but added that “periodic announcements from Turkey about their coordination of the (normalization) process with Azerbaijan…does not contribute to the constructiveness of the process from our point of view.”

AND IN OTHER NEWS: Science, Sports & Culture