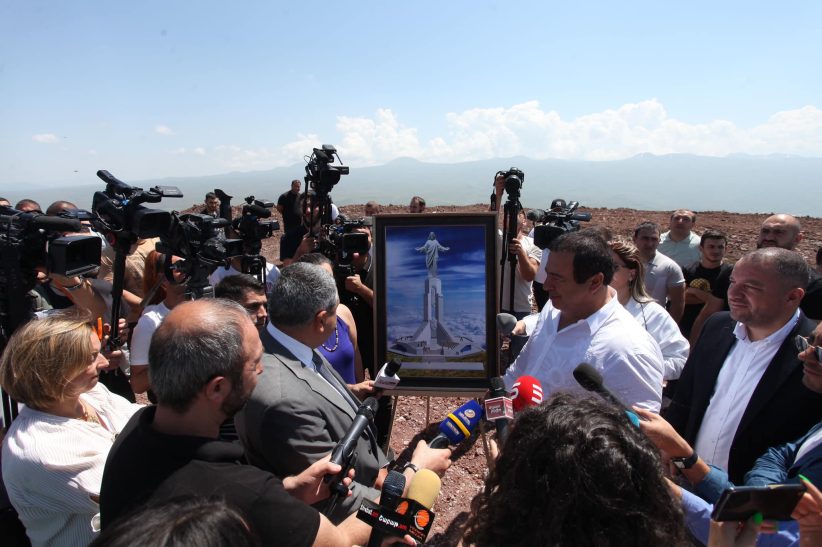 Well-known businessman and politician Gagik Tsarukyan gathered with Armenian government officials on Mount Hatis Sunday as construction crews broke ground on a large statue of Jesus Christ, prompting the Culture Ministry to urge an immediate stop to the work.

“A few years after this historic day, the Savior’s statue will rise in Armenia as a symbol of unity, solidarity, hope, and light,” said Tsarukyan, who first floated the idea of building the 33-meter tall statue in January.

But later in the day, the Ministry of Education, Science, Culture, and Sport said it “demands to stop any (building) activity” on Mount Hatis until it conducts a thorough review of the construction’s impact on nearby archeological sites.

There are about 20 historical and cultural sites on and around Mount Hatis, according to the ministry, including the recently discovered ruins of a fortress from the bronze or iron age.

Just last week, Prime Minister Nikol Pashinyan said his administration’s “initial opinion (on building the statue) is positive, since we think that it will significantly increase tourist interest,” but also noted that government agencies are still reviewing the proposal.

Economy Minister Vahan Kerobyan, who took part in the groundbreaking ceremony over the week, struck a similar note, telling reporters “we believe that a large tourist flow will be secured” by building the statue.

Armenia’s Tourism Committee also echoed that line of reasoning in a statement to CivilNet last week, saying “the construction of such a statue as a novelty may be of interest to a particular tourist segment and bring new tourist flows to Armenia.”

In sharp contrast, the Mother See of Holy Etchmiadzin, the governing body of the Armenian Apostolic Church, has come out strongly against the project.

“The Church does not consider the installation of the statue of our Lord Jesus Christ to be acceptable since it is not appropriate” in the Armenian religious tradition, it said in March.

The Mother See did not respond to repeated requests from CivilNet for comment following the Armenian government’s decision last week to formally review the statue proposal.

Many in Armenia have been critical of the project, arguing that Tsarukyan, one of Armenia’s richest men, could put his money to better use by funding social service programs or helping to rebuild the army following devastating losses in the 2020 war in and around Karabakh.

Hetq, a prominent investigative outlet in Armenia, published a story Monday alleging that public officials in three villages surrounding Mount Hatis have sold about 140 hectares of land in the past two months to a charitable foundation linked to Tsarukyan at extremely low prices.

EventToura: Putting Armenia on the Map and Promoting Small Businesses Active in the Tourism Sector