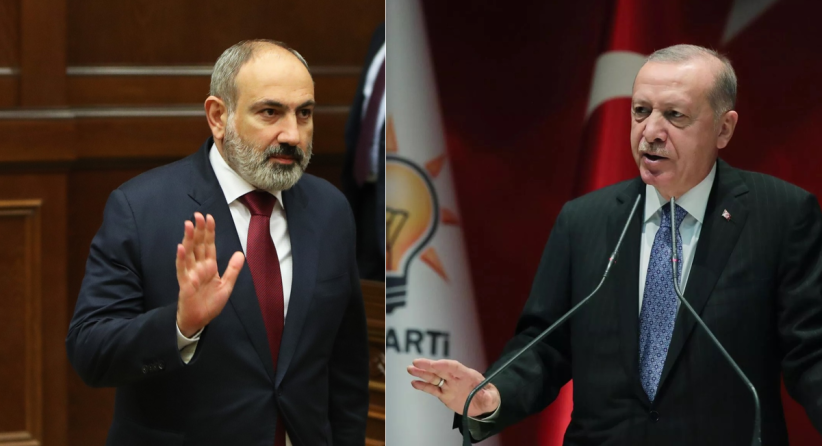 Prime Minister Nikol Pashinyan and Turkish President Recep Tayyip Erdoğan held their first-ever phone call Monday, the Armenian prime minister’s office announced, in a breakthrough moment for Armenia-Turkey relations. It is the first direct conversation between the leaders of the two countries in many years.

Pashinyan and Erdoğan “expressed their expectations that the agreements reached” to partially reopen the border and begin direct air cargo trade “will be implemented soon,” according to the Armenian government read-out.

At a meeting earlier this month, Armenia and Turkey agreed to open their land border to citizens of third countries “at the earliest possible date,” so far the most significant outcome of ongoing normalization talks.

The two sides have yet to announce a concrete timeline for the border reopening, but Pashinyan notably said at a cabinet meeting last week that Armenian government officials should start preparing to work with their Turkish counterparts to implement that agreement.

In addition, Pashinyan and Erdoğan “emphasized the importance of the bilateral normalization process between their countries, which will also contribute to the strengthening of peace and stability in the region,” the statement said.

The Armenia-Turkey border, which stretches for hundreds of kilometers, has been closed since the early 1990s, when Turkey, together with Azerbaijan, imposed a devastating economic blockade on Armenia.

Other ongoing disputes include Turkey’s refusal to acknowledge the Armenian Genocide, as well as Turkey’s crucial role aiding Azerbaijan in the 2020 war in and around Karabakh. That conflict saw Armenia suffer a disastrous military defeat and prompted a major humanitarian crisis in the region.

Rubinyan told CivilNet in an interview last week that “Armenia is ready to have open borders and diplomatic relations with Turkey at any time.”