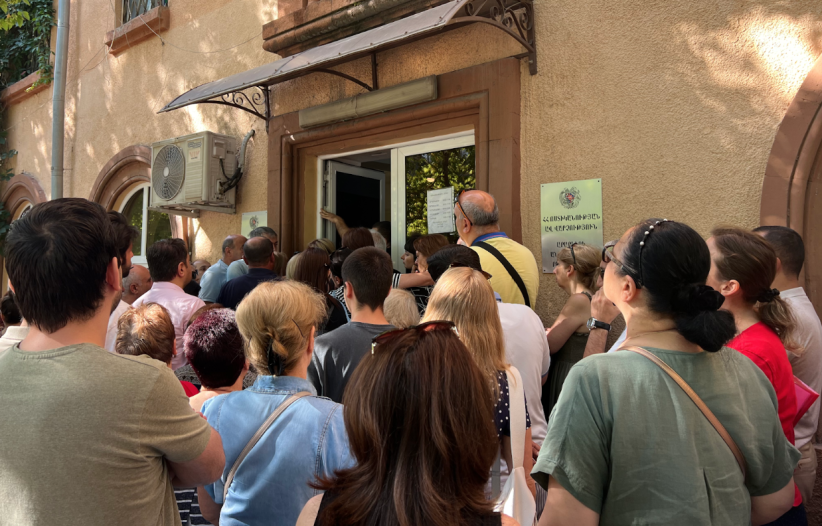 For those seeking passport services in Yerevan, long lines and impatient crowds await.

A CivilNet reporter visited the Arabkir district passport center last week where, like several others across Yerevan, scenes of chaos and mismanagement greeted Armenian citizens, diasporans, and foreign nationals alike. Residents said altercations with the police, charged encounters with employees, and rowdy crowds have not been uncommon.

The period between May and August is typically the busiest time of year for the Armenian Passport and Visa Department, the division of the Armenian police force that deals with passport and visa issues. In Armenia, the department is widely known by its Russian acronym, OVIR.

Those months usually see a jump in demand for passport services, as Armenian residents seek exit visas to travel abroad and Armenians living abroad, who mostly visit in the summer, apply for new passports or to renew old ones.

However, this year has proven exceptionally busy, driven at least in part by a post-pandemic boom in tourism in Armenia and around the world. Since the beginning of the year, nearly 10,000 people have applied for Armenian citizenship, according to the police. For the same period in 2021, this number was about three times less. 2019 figures were unavailable.

Moreover, tens of thousands of Russians and Ukrainians have arrived in Armenia since the beginning of Russia’s invasion of Ukraine in February, prompting a further increase in demand for residency, asylum and other passport services.

“From the beginning of the year until now, we have received over 8,000 inquiries regarding repatriation, obtaining citizenship, and residency status, the overwhelming majority of which, at least 75%, have been received from (Armenians from) post-Soviet countries,” a spokesperson for the Office of the High Commissioner for Diaspora Affairs told CivilNet.

Passport centers across Yerevan appear unprepared to handle the surge in applications.

The police released a statement last week addressing the unprecedented spike in activity and asking the public to refrain from unruly behavior in the queues.

“2022 is significantly different from other years, because applications for Armenian citizenship by our compatriots residing in foreign countries have seen an unprecedented increase,” read the statement. “A large number of applicants are also Armenian citizens from foreign countries who, being in Armenia during the summer, apply to receive a passport or to exchange their expired passports.”

The number of foreigners arriving to live and work in Armenia for an extended period of time has also increased significantly this year, the statement added.

Kristina Amirkhanyan, an Armenian from Ukraine seeking a social security card to register for work, told CivilNet it was already her fifth day waiting for passport services.

“Today, I hope I can finally enter because I came early and put my name on the waiting list. There have been days when I waited four or five hours,” she said.

Syrian Armenian Andranik Vardapetyan similarly found himself at the Arabkir passport office after being told last Wednesday to return the following day for his paperwork. Crowds outside the station had already formed before the offices opened at 9 in the morning.

“My passport expired so I need to renew it. I waited here three or four hours yesterday,” he said. “I believe I will be waiting for a long time today.”

Even the passport centers where lines are reportedly moving more quickly have still seen a large influx of applicants, stretching wait times.

The lines at the Davtashen district station “are not this long, but still quite long,” said Yerevan resident Armine Atoyan, who had already been waiting at the Arabkir station for over two hours. “In Davtashen, I waited for exactly two hours. There, they assist you very quickly,” she said.

“Here, I believe I will finish a lot later, because my place in line is 116.”

Yerevan residents told CivilNet they believe the passport centers are short-staffed because employees’ summer vacations coincide with the peak season for applications, and management often fails to make arrangements to replace them.

Many of them complained that the police have not outlined any special measures to resolve the situation or taken steps to address the exceptional circumstances.

In an interview with 1in.am news agency, former head of the Passport and Visa Department Mnatsakan Bichakhchyan explained recent developments which further exacerbate issues at the passport centers.

In response to a CivilNet follow-up, Bichakhchyan confirmed that the new law is causing an accumulation of paperwork at already low-staffed offices during the peak season for activity.

The police announcement last week only urged people to “exercise civic responsibility and to not further complicate the situation with their actions” or take more than one ticket from the queuing machine.

The police refused to comment further when contacted by CivilNet, directing our reporter to the statement released last week.