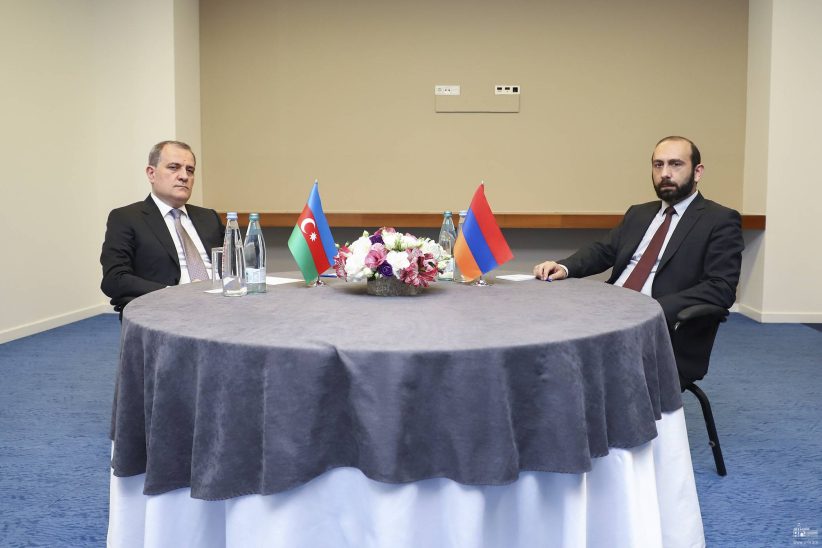 It has been an unusually busy few days of diplomacy in the Caucasus.

Most notably, Armenian and Azerbaijani Foreign Ministers Ararat Mirzoyan and Jeyhun Bayramov held their first one-on-one meeting on Saturday in Tbilisi, where they discussed steps to normalize relations between their countries.

As usual, government read-outs of the meeting were light on substance. Both the Armenian and Azerbaijani summaries said the two officials discussed “a wide range of issues,” without providing further details.

During their visit, Mirzoyan and Bayramov also met separately with Georgian Prime Minister Irakli Gharibashvili. Government summaries were again light on substance, saying that both Yerevan and Baku pledged greater cooperation with Tbilisi.

Following the talks, Gharibashvili wrote on Twitter that Georgia “remains committed to play its positive role (and) further host meetings.”

U.S. Secretary of State Antony Blinken also weighed in, writing that the Tbilisi meeting was a “positive step” and adding that “direct dialogue is the surest path” forward.

The next day, U.S. Assistant Secretary of State Karen Donfried made separate calls to Mirzoyan and Bayramov, who reportedly briefed her on their meeting in Tbilisi. Read-outs of the calls said the officials “exchanged views,” again without going into any detail.

Notably, the Armenian summary said the call to Mirzoyan had been made “on the initiative of the American side,” while the Azerbaijani government did not specify.

Donfried, who heads the Europe and Eurasia bureau at the State Department, visited all three Caucasus countries last month to “highlight the readiness of the United States to help build a lasting peace” in the region.

Klaar called the talks “very productive” and “excellent” on Twitter, but the government read-outs of the meetings, yet again, provided little detail, just saying “the sides exchanged views” and discussed “the processes taking place” in the region.

Also last week, William Burns, the director of the U.S. Central Intelligence Agency, paid a surprise visit to Yerevan, meeting with Pashinyan and Armen Grigoryan, the head of the Armenian Security Council. The meeting summary was even more light on detail.

The visits, meetings, talks, and calls all come amid what appear to be accelerating efforts by Armenia to move forward with normalizing relations with Azerbaijan and Turkey.

On Monday, Armenian Deputy Prime Minister Mher Grigoryan announced that a joint Armenian-Azerbaijani border commission will convene in Moscow next month, according to Bagramyan 26, a popular Armenian Telegram channel.

“There is no final agreement yet on the exact date of the meeting,” Grigoryan’s office said in a statement.

A week before, Pashinyan and Turkish President Recep Tayyip Erdoğan held their first-ever phone call, days after Armenia and Turkey reached a breakthrough agreement to partially open their land border “at the earliest possible date.”

Both the United States and Russia have come out strongly in favor of Armenia and Turkey normalizing relations.

In a sign that international attention on the Caucasus region shows no signs of abating, Pashinyan met on Monday with Sergey Naryshkin, the head of Russia’s Foreign Intelligence Service, and spoke by phone with Russian Prime Minister Mikhail Mishustin.

American, Russian intelligence chiefs visit Armenia within days of one another