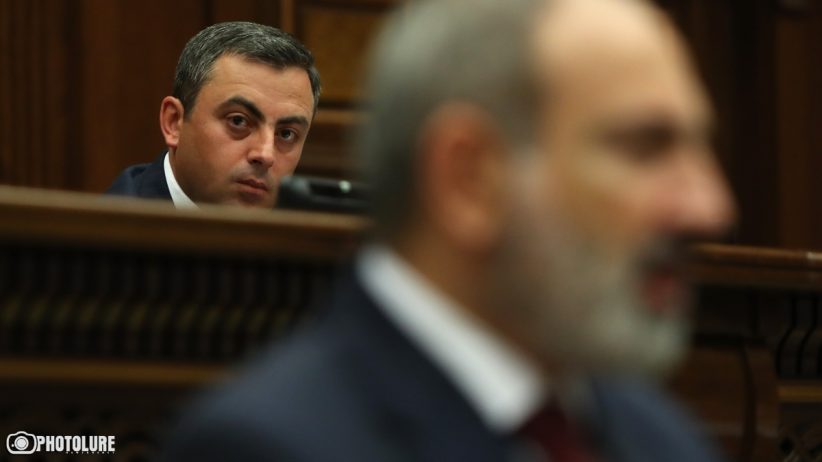 Armenia’s political opposition will end its boycott of parliament in September and return to the National Assembly “with its own agenda,” opposition leader Ishkhan Saghatelyan said Friday in an interview with Armenian news site Yerkir Media.

Nearly all opposition lawmakers have been boycotting parliamentary sessions since April, when they decided to organize anti-government protests instead.

Thousands have taken to the streets of Yerevan in recent months to participate in the demonstrations, demanding that Prime Minister Nikol Pashinyan resign, largely out of concern that he may be preparing to cede control over Karabakh to Azerbaijan as part of a normalization deal.

Saghatelyan, who has emerged as the opposition’s most visible leader, has dismissed criticism that the rallies have not affected any tangible change in government.

The opposition’s boycott has been “justified,” he said, because “thanks to the (protest) movement, the authorities’ rhetoric on the Artsakh (Karabakh) issue has changed.”

Saghatelyan also condemned the possibility that the ruling Civil Contract party may try to expel opposition lawmakers from parliament in his interview with Yerkir Media, a news site closely affiliated with his party, the Armenian Revolutionary Federation (Dashnaktsutyun).

There would be a “full-fledged constitutional crisis” in the country if Civil Contract goes through with the move, he warned.

Civil Contract backed down last week on a threat to vote to oust 33 of the opposition’s 35 lawmakers, but a Civil Contract member warned the party could revisit the issue in September or October. The Constitutional Court would have to approve such a move.

Armenian law says members of parliament can lose their seats if they skip, for “non-legitimate” reasons, more than half of the votes held during one six-month legislative session. The opposition lawmakers’ boycott has made them eligible for expulsion.

Earlier this month, nearly all high-ranking opposition lawmakers decided to step down from their posts in protest of a Civil Contract decision to remove Saghatelyan and another prominent opposition figure from their leadership positions in parliament for excessive absenteeism.

Armenia sees jobs increase by 8,000 in one month