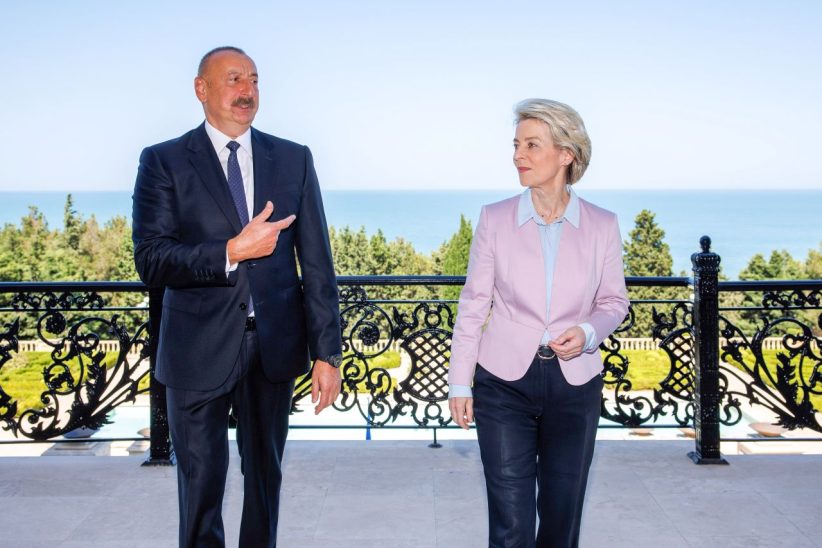 The article was published in the World Energy Weekly (July 25 issue), a publication of Petrostrategies, a French think-tank specializing in energy issues.

EC and Azerbaijan sign MoU on hydrogen, efficiency, methane, power grids, etc. In addition to the purchase of gas – which is its main objective – the Memorandum of Understanding (MoU) signed by the European Commission (EC) and Azerbaijan on July 19 provides for cooperation between the two parties in various fields. These include: renewables; the interconnection of power grids in Azerbaijan and the European Union (to EU standards); the ending of methane leaks from Azeri oil and gas fields and facilities; energy-efficiency efforts in Azerbaijan with EU support, and so on. It also provides for the production and export of renewable hydrogen. With this in mind, the MoU stipulates that the expansion of gas pipelines to bring more gas from Azerbaijan to Europe will be carried out in such a way that the pipelines can also be used to transport renewable gas. The conversion of existing gas pipelines will also be studied.

The final section of the agreement on “a strategic partnership in the field of energy”, signed in Baku by the President of the European Commission (EC), Ursula von der Leyen, and the President of Azerbaijan, Ilham Aliyev on July 19, stipulates that “nothing in this Memorandum of Understanding should create any binding legal or financial obligations or commitments between the Sides or in relation to any third party”. So everything has yet to be negotiated. Nevertheless, broad areas of collaboration are planned, ranging from the purchase/sale of gas to cooperation in renewable energies, electricity, hydrogen and methane, not to mention the facilitation of financing that will, of course, eventually be required, especially to expand the Southern Gas Corridor (SGC), which is to supply more gas that the European Union (EU) is keen to import from Azerbaijan as soon as possible. The MoU was obviously motivated by the latter plan, as the EU wants to stop using Russian gas as much as – and as soon as – possible, and will have to find alternative sources of natural gas to achieve this goal.

Time limits governing the EU’s use of natural gas as an energy source are specified at the beginning of the MoU: “The European Union acknowledges that natural gas will continue to play an important role in terms of energy consumption and electricity generation […] until 2030. Going forward, natural gas will continue to be used in the European Union while being progressively replaced, in line with its climate-neutrality commitment to 2050”. In short, Azerbaijan must know that the EU’s gas needs will start to decline in 2030 (assuming that they still exist at all) and that the Union will no longer need any gas after 2050. However, the MoU stipulates that everything possible will be done to ensure that the EU can import “at least 20 billion cubic meters of gas annually by 2027”, which is twice as much as the plateau volume provided for under existing contracts. The EU imported 8.1 bcm of Azeri gas in 2021, and Azerbaijan will strive to supply 12 bcm/annum of gas to the EU starting in 2023, said Ursula von der Leyen. This is 2 bcm more than the contractual plateau.

For its part, Azerbaijan wants the EU’s gas purchases to be assured. This is clear from section 1 of the MoU, which states that “the Sides underline the importance of long-term, predictable and stable contracts in order to underpin security of demand for producers, exporters and infrastructure owners, and security of supply for importers and buyers. The duration of the contracts should correspond to the role of natural gas in the European Union’s decarbonization agenda, while supporting the economics of the development of the required export infrastructure investments”. It’s a well-known fact that the EC doesn’t like long-term gas purchase/sale contracts, which it has sought to eliminate from the European market by favoring shorter-term contracts and fostering reliance on the spot market. Even in long-term import contracts, it has also strongly encouraged the indexation of gas prices to gas-hub prices. The EC refuses to give up this principle, despite the fact that indexation to gas hubs (instead of oil prices) contributed to the price increase that occurred in autumn 2021. Indeed, the MoU specifies that the parties will ensure compliance with “the principle of market-oriented pricing”. Section 1 – which is the most important part of the MoU – also states that “the European Union may propose aggregated demand purchase schemes to Azerbaijan”: these are the notorious grouped purchases, promoted by the EC, which have aroused so much skepticism among both importing companies and exporting countries.

Can the goal of developing another 10 bcm/annum of gas supply be achieved by 2027? At least five issues will have to be finalized, first and foremost the gas purchase/sale contracts without which no investment can be considered. It can take several years to negotiate such contracts: in this case, it will have to be done extremely quickly, within the following year at the latest, if the EU wants the targeted deadline (2027) to be met, as the various components will then have to be designed, financed and built, both downstream (expansion of gas pipelines) and upstream (gas production in the Caspian, probably as part of a phase-3 development of the Shah Deniz field operated by BP).

The so-called Southern Gas Corridor (SGC) is composed of two phases: one serves only Georgia and Turkey (7.4 bcm/annum), while the other supplies the European market. This second phase will serve as a model for the new project proposed in the July 19 MoU. It has four components: gas (and condensate) production, the Azeri and Georgian sections of the South Caucasus Pipeline (692 km), the 1,850-km Trans-Anatolian Natural Gas Pipeline (TANAP) in Turkey (these two lines have a capacity of 16 bcm/annum, including 6 bcm/annum for the Turkish market) and the 880-km Trans-Adriatic Pipeline (TAP), which has a capacity of 10 bcm/annum and serves Greece, Bulgaria (via a branch which has just been commissioned), Albania and Italy. This second phase cost $40 billion and took nine years to complete, not including the Bulgarian connection.

Who will buy the additional 10 bcm/annum of Azeri gas? This isn’t just a commercial issue, as it involves dependence on the gas supplier (Azerbaijan) and the main transit country (Turkey). Ruled by the Aliyev dynasty for three decades, Azerbaijan can’t be regarded as a country of unquestionable stability. Its last war in Karabakh (autumn 2020) virtually transformed it into a vassal of Turkey, the support of which was decisive in its victory. The latter has no scruples at all about using blackmail in its foreign policy, as its demonstrated in the case of the Syrian refugees during the 2010s (in return for billions of euros from the EU), and as is currently evident in the question of the accession of Finland and Sweden to NATO.

Turkey already controls the transit of some 27 bcm/annum of gas to Europe (via TurkStream and TANAP). There is now talk of increasing the volume of Turkish transit to 37 bcm/annum (or 20 bcm/annum if the EU stops buying Russian gas via TurkStream). What would happen if a serious political conflict emerges between Ankara and the EU? Naval and air skirmishes are frequent between Greece and Turkey, two countries with serious territorial disputes. By using ships and platforms protected by its navy, Turkey hasn’t hesitated to counter the hydrocarbon exploration efforts of Cyprus, an EU member-state whose northern parts (40% of its territory) have been occupied by the Turkish army since 1974. In November 2019, Ankara signed a water demarcation agreement with Libya in the Mediterranean which aims to exclude the possibility of building a direct gas pipeline between Israel and Greece: Ankara wants this gas to transit through its territory. It is currently occupying 8,835 square kilometers in northwestern Syria, an area which it wants to expand. What’s more, Turkey wants the Treaty of Lausanne (July 1923) to be revised, which would have so many consequences that it amounts to asking for Pandora’s box to be opened. In short, to reduce its dependence on Russian gas, the EU would be increasing its dependence on Turkey!

On July 20, the European Commission (EC) presented its plan to deal with the risk of a natural gas shortage in the coming winter, resulting from the war in Ukraine. The program’s title is self-explanatory: “Save Gas for a Safe Winter”. Its main highlight is that a temporary 15% reduction in gas consumption is to be targeted between August 1, 2022 and March 31, 2023. “The European Union faces the risk of further gas supply cuts from Russia […] Taking action now can reduce both the risk and the costs for Europe in case of further or full disruption”, says the EC. The reduction will initially be voluntary. By the end of September 2022, MemberStates will be required to update their national emergency plans and specify which demand reduction measures they are planning to take. They will have to consult the Commission and relevant stakeholders before introducing further demand-reduction measures and will have to report achieved reductions to the Commission.

The new regulation is expected to remain in force for a period of two years after its entry into effect, but a review of the general situation of the EU gas supply is planned for August 2023 at the latest. The EC is proposing another important new measure, namely “a new Council Regulation on Coordinated Demand-Reduction Measures for Gas, based on Article 122 of the [EU] Treaty”. The new Regulation would also provide for “the possibility to declare, after consulting Member-States, a ‘Union Alert’ on security of supply, imposing a mandatory gas-demand reduction on all Member-States”. Such an alert may be declared either by the EC itself, or by at least three Member-States. “The Union Alert can be triggered when there is a substantial risk of a severe gas shortage or an exceptionally high gas demand”.

To meet the 15% reduction target, the EC has adopted guidelines focused on three priorities: energy savings, substitution and solidarity. These measures will mainly target industry; households and essential public services will be exempt. Households are protected customers and will be the last to be hit by shortages. Nevertheless, energy-management measures will have to be encouraged, by means of awareness campaigns in particular. To support the efforts of industry, several measures may be implemented by EU Member-States: “auction or tender systems to incentivize energy reduction by industry”; state aid to bear the costs incurred; the use of “interruptible contracts”; and the possibility of swapping contracts between major consumers, thus allowing production to be relocated to regions less seriously affected by such a shortage. The plan provides guidance about which sectors to prioritize. Furthermore, substitution with alternatives to gas – including coal – is recommended as far as possible for industry, heating and power generation. Such a possible switch to coal should only be temporary. The EC also emphasizes solidarity between Member-States and encourages the establishment of “bilateral solidarity agreements foreseen under the Regulation on gas security of supply […], clarifying the technical, legal and financial arrangements to provide gas to […] legally-protected customers [in] neighbouring countries in case of crisis”.

Armenia sees jobs increase by 8,000 in one month