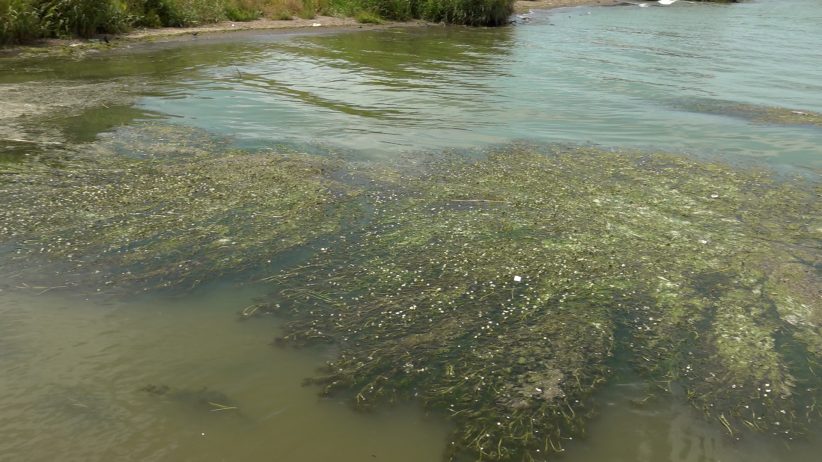 A CivilNet team that visited Sevan last month reported seeing bright blooms of cyanobacteria, or blue-green algae, covering large swaths of the lake, as well as a strong, putrid odor.

While algae form an essential part of a healthy lake ecosystem, they can, in excessive amounts, pose a serious threat to wildlife and human health. Algal blooms block sunlight from penetrating the water and take up precious oxygen, which can lead to mass die-offs of fish and other organisms.

Some algae species even release toxins into the water that can cause illness or death upon exposure, including for humans. Researchers have determined that the algae in Sevan produces toxins.

Sevan has been affected by periodic algal blooms for decades, a phenomenon that Gor Gevorgyan, a hydrobiologist at Armenia’s National Academy of Sciences, says has arisen out of a perfect storm of man-made factors.

Also watch (in Armenian): How to cure Sevan: scientists’ prescription

The start of Sevan’s environmental problems dates back nearly a century. As Armenia underwent a period of rapid industrialization in the 1930s, the Soviet authorities began diverting large amounts of water from Sevan to use for irrigation and electricity production. The lake’s water level started to drop noticeably, and algal blooms first appeared in the 1960s.

By the turn of the millennium, Sevan’s water level had fallen by more than 65 feet, according to researchers. Today, despite some recent efforts by successive Armenian governments to raise it by diverting water into Sevan from nearby rivers, the lake’s water level remains well below historical levels.

That drop in water level has had a number of negative knock-on effects, Gevorgyan explained. A shallower Sevan allows sunlight to penetrate more deeply into the lake, raising the water temperature, which creates a more favorable environment for algae to grow.

Draining Sevan has also shrunk the size of the lake’s hypolimnion, or lowest layer of water, which stores significant amounts of organic matter. That has allowed more organic matter to float to the lake’s upper layers, again promoting algal growth.

Meanwhile, nearby communities continue to dump their sewage, untreated, into Sevan. Releasing sewage into a lake introduces excess nitrogen and phosphorus in a process called eutrophication, throwing off the nutrient balance in the water. That, too, helps algae grow.

Compounding the problem, Sevan has also seen a severe depletion of its fish stocks over the decades, a trend linked both to the lake’s degraded water quality and to overfishing. That has deprived Sevan of a key check on algal growth, since fish feed on organic matter that, in excess, can encourage algal blooms. Some of the fish species in Sevan also feed on the algae itself.

Those are all underlying problems that must be addressed to improve Sevan’s ecosystem and prevent future algal blooms, Gevorgyan argued: “The process of eutrophication continues in the lake. We should focus on that, and not on the blooms.”

He explained that “we can act to prevent or minimize the entry of biogenic materials into the lake” by installing sewage treatment plants and taking other steps to improve the lake’s water quality, like implementing a program to restock Sevan with fish.

“The faster and more actively we work, it will only bring benefits, since delaying will lead to investing greater efforts and resources,” he added.

With additional reporting by Zhanna Avagyan