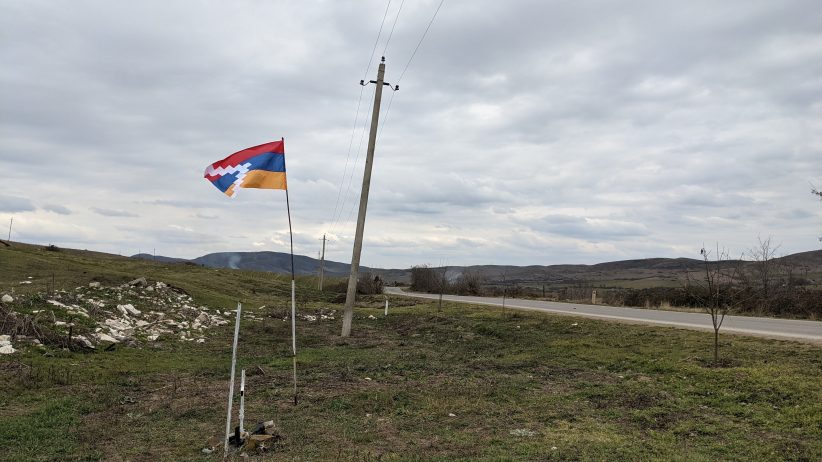 No other detail about the mobilization decree was immediately made available by Harutyunyan’s office.

Four of the 19 injured soldiers were taken to the hospital in critical condition, according to Karabakh State Minister Artak Beglaryan. Those figures make Wednesday one of the deadliest days for Armenian forces since the end of the 2020 war.

Harutyunyan also convened a meeting of the Karabakh Security Council Wednesday, saying that “there are certain changes in the de-escalation of the situation related both to the military situation and to the Berdzor (Lachin) corridor,” possibly referring to Azerbaijan’s claims of territorial advances made during Wednesday’s attacks.

Harutyunyan noted that “the necessary steps are being taken through the command staff of the Russian peacekeeping contingent deployed in Artsakh (Karabakh) in order to de-escalate the situation” and urged “restraint and calmness” among Karabakh residents.

The Artsakh Defense Army has also said that the Russian peacekeepers in Karabakh are working to “stabilize the situation,” adding that “as of 6 p.m., the operational-tactical situation is relatively stable.”

Hours earlier, the army released a statement saying that “around 3 p.m., Azerbaijani units employed UAVs at the northwestern part of the line of contact,” following up on another statement announcing that “starting at 9 a.m., Azerbaijani units grossly violated the ceasefire regime by employing grenade launchers and UAVs in the direction of Defense Army positions.”

The Azerbaijani Defense Ministry has reported one soldier shot dead “on the morning of August 3” and has officially acknowledged launching the attacks, calling them a “counterterrorist operation” named “operation revenge.”

It noted that the attacks took place in the vicinity of the Armenian-inhabited villages of Verin Horatagh and Yeghtsahogh, claiming that Azerbaijani troops captured a number of strategic areas near those villages.

The attack near Yeghtsahogh is particularly significant, given its location close to the vital Lachin corridor, which contains a road connecting Armenia and Karabakh whose future has become the source of escalating disagreement between Yerevan and Baku in recent weeks.

Azerbaijan’s attacks come just two days after units of the Artsakh Defense Army thwarted a major incursion attempt by Azerbaijani forces into Karabakh at multiple points along the line of contact. One Armenian soldier sustained non-life-threatening injuries in those clashes.

The Armenian and Karabakh Foreign Ministries have each released statements castigating Azerbaijan for launching Wednesday’s attacks.

Armenian Prime Minister Nikol Pashinyan himself has yet to comment publicly, though pro-government Armenian news sites are reporting that he convened a meeting of Armenia’s Security Council Wednesday. CivilNet has not confirmed that information.

In its statement, the Armenian Foreign Ministry added that “we consider unacceptable the statements of the Azerbaijani side attempting to unilaterally change the legal regime in the Lachin Corridor…and reaffirm that the road passing through the Lachin Corridor can be changed only according to a plan approved by the parties to the (ceasefire) statement.”

“As is clearly defined in the statement, within the next three years, the parties…should determine the plan for the construction of the new road through the Lachin Corridor connecting Armenia with Nagorno-Karabakh,” the statement continued. “We emphasize that there is no such plan approved within a trilateral format so far.”

The Armenian Foreign Ministry’s position on the Lachin corridor issue echoed comments made earlier in the day by Armen Grigoryan, the secretary of Armenia’s Security Council. Speaking to the Armenpress news agency, he rejected a reported request from Baku for Yerevan to begin using an alternative route to the Lachin corridor, Armenia’s only overland connection with Karabakh.

“Armenia has not approved any plan, and therefore, Azerbaijan’s demand is not legitimate,” he said.

The day before, Harutyunyan’s office released a statement announcing that “the Azerbaijani side, via the (Russian) peacekeeping contingent station in Artsakh, submitted a demand regarding organizing traffic on the new route in the near future.”

Azerbaijan has not publicly confirmed or denied making the alleged request.

The Russia-brokered ceasefire that ended the 2020 war says a new road should be built to connect Armenia with Karabakh that bypasses the current route, a five-kilometer wide strip of land controlled by Russian peacekeepers. Once the alternative route is completed, Russian peacekeepers are meant to hand over control of the old road to Azerbaijan and relocate to the new road.

In the ceasefire, Armenia and Azerbaijan “agreed that a plan for the construction of a new route along the Lachin corridor shall be determined” by the end of next year.

Grigoryan rejected Azerbaijan’s reported request for Armenia to begin using the new road by citing that line, arguing that Yerevan and Baku have not yet come to a formal plan on the issue, even though much of the new route has already been built.

“Yes, construction has already started, but notice that the trilateral (ceasefire) statement mentions a plan for the construction of the new route. No such agreed plan exists,” he said.

Even though the ceasefire does not specify which side should take on the responsibility and cost of building the new road, Baku has taken the lead on the project. Azerbaijani construction crews have reportedly already finished building nearly the entire section of the route that lies in Karabakh. In sharp contrast, Yerevan announced plans to start building the section that lies within Armenia only last week.

It remains unclear how traffic could pass along an unfinished road.

The Karabakh Interior Ministry said Wednesday the current route remains open, confirming that “free and safe passage is being ensured by the Russian peacekeeping contingent.”

The EU and OSCE have each called for de-escalation in and around Karabakh.

Realizing the potential of Armenian entrepreneurship

Azerbaijan’s attacks and the state of affairs in Karabakh