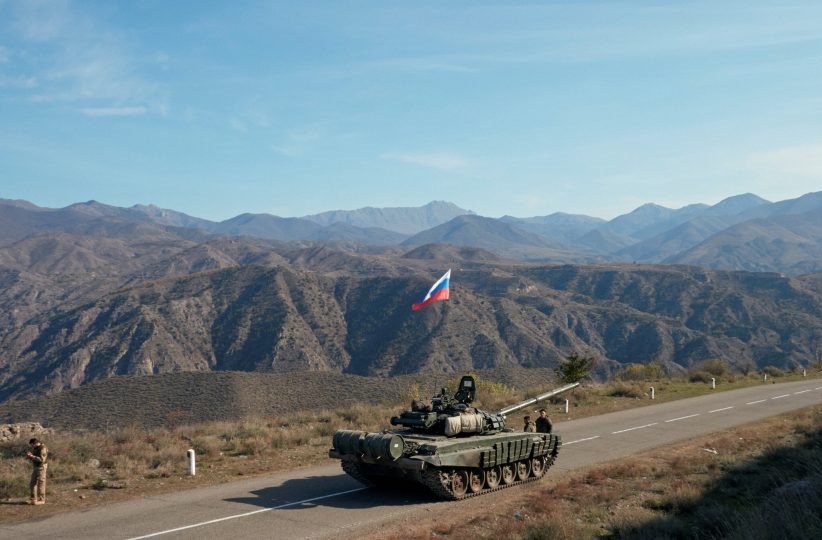 Armenian Prime Minister Nikol Pashinyan called on Azerbaijan to respect the ceasefire in and around Karabakh at a cabinet meeting Thursday in his first public comments since a major escalation in Karabakh the day before left two Armenian soldiers dead.

Another 19 Armenian soldiers were injured, four critically, in two attacks launched by Azerbaijan in a “revenge operation.” Those figures make Wednesday one of the deadliest days for Armenian forces since the end of the 2020 war.

In a lengthy address, Pashinyan decried the escalation as an attempt by Azerbaijan “to abolish that (ceasefire) declaration and to avoid the realities recorded by that declaration” and called on Baku to “respect” the ceasefire and “fulfill its obligations.”

Still, he stressed that Armenia “will not abandon that (peace) agenda and we will not deviate” from it.

While Pashinyan reaffirmed Armenia’s position that Russia’s peacekeepers in and around Karabakh “are a key factor in ensuring the security of Artsakh Armenians,” he also called out their apparent inability or unwillingness to prevent Azerbaijani incursions, citing a series of such incidents since the end of the war.

Those apparent failures “bring to light questions of a systemic nature” and “raise questions among the Armenian public about the purpose and essence of the peacekeeping operation,” he said.

Pashinyan added that it may be “necessary to take measures to establish that mandate (for the Russian peacekeepers) internationally, or to endow the peacekeeping mission with a wider international mandate,” but refused to go into any detail about what that would mean on the ground.

The mandate granted to the Russian peacekeepers in the ceasefire is quite vague, only providing a five-year timeline for deployment extensions. Moscow pushed for Yerevan and Baku to sign a separate agreement outlining a clear mandate immediately after the 2020 war ended, according to the International Crisis Group, a Brussels-based think tank, but failed to get the sides to the negotiating table.

Azerbaijan refused to sign the agreement unless it recognized Karabakh as Azerbaijani territory, a prospect that Yerevan refused, according to Crisis Group reporting, citing unnamed officials on both sides.

Pashinyan said Thursday it was “very necessary to clarify the details of the peacekeeping operation in Nagorno-Karabakh,” but placed blame only on Azerbaijan for “refusing to sign the mandate” agreement. That is believed to be his first public comment on those behind-the-scenes negotiations.

In his speech, Pashinyan repeatedly called on Azerbaijan to respect what he termed the “three main pillars” of the ceasefire: the existence of Nagorno-Karabakh as an entity, of the post-war line of contact between Armenian and Azerbaijani forces, and of the Lachin corridor.

“These are the international obligations of Azerbaijan,” he said.

All three ‘pillars’ are “recorded (in the ceasefire), which Azerbaijan is still trying to deny,” Pashinyan continued. “Such statements are a gross violation of the trilateral (ceasefire) declaration.”

“It is our expectation that…the Russian peacekeeping force will not give Azerbaijan the opportunity to undermine” the ceasefire, he added.

Since its victory in the war, Azerbaijan has repeatedly claimed that “Nagorno-Karabakh does not exist,” referring to the part of Karabakh that remains under Armenian control as “the territory of Azerbaijan, where Russian peacekeepers are temporarily stationed.”

Finally, the Lachin corridor refers to a five-kilometer wide strip of land controlled by Russian peacekeepers that contains the only road connecting Armenia and Karabakh. The corridor’s future has become the source of escalating disagreement between Yerevan and Baku in recent weeks. Azerbaijan has reported it captured some strategic areas near the corridor in the course of Wednesday’s clashes.

Pashinyan continued, saying “Azerbaijan’s formulation (on the Lachin issue) is another gross violation of the trilateral declaration.”

The ceasefire says a new road should be built to connect Armenia and Karabakh that bypasses the current route, after which Russian peacekeepers are meant to hand over control of the old road to Azerbaijan and relocate to the new road.

In the ceasefire, Armenia and Azerbaijan “agreed that a plan for the construction of a new route along the Lachin corridor shall be determined” by the end of next year.

Yerevan has repeatedly rejected a reported request from Baku to begin using the new road “in the near future,” noting that Armenia and Azerbaijan have not yet come to a formal plan on the issue, even though sections of the new route have already been built.

“I record that there is no such plan at the moment,” Pashinyan stressed.

Even though the ceasefire does not specify which side should take on the responsibility and cost of building the new road, Baku has taken the lead on the project. Azerbaijani construction crews have reportedly finished about 30 kilometers of the route already.

In sharp contrast, Yerevan announced plans to start building the section that lies within Armenia only last week. Gnel Sanosyan, Armenia’s Minister of Infrastructure and Territorial Administration, told journalists Thursday he expected Armenia’s section to be completed by the spring.

In addition, Pashinyan called on any plan for the Lachin corridor to address “not only the construction of the road,” but also “a number of important issues…including issues related to the supply of electricity and gas to Nagorno-Karabakh.”

Aside from the road, a number of other crucial pieces of infrastructure are located within the Lachin corridor, including a high-voltage electrical line, gas pipeline, and internet cable, all running from Armenia to Karabakh. It remains unclear what would happen to them should Azerbaijan take control of the area.

Armenian forces in and around Karabakh

Pashinyan also hit back against Azerbaijan’s claims that the Armenian soldiers in and around Karabakh are “illegal Armenian armed groups,” defending them as a “necessity (that) arose only after Azerbaijan refused to sign the mandate of the peacekeepers.”

“If the Russian peacekeeping troops and Azerbaijan guarantee the integrity of the contact line, I think the Nagorno-Karabakh Defense Army will not have the need to carry out combat duty,” he said.

In addition, Baku has repeatedly called on Yerevan to withdraw all troops serving in the Armenian army from deployment in Karabakh, arguing that refusing to do so violates a line of the ceasefire stipulating that “the peacekeeping forces of the Russian Federation shall be deployed concurrently with the withdrawal of the Armenian troops.”

“I have to record officially that there are no servicemen of the Republic of Armenia in Nagorno-Karabakh,” Pashinyan said Thursday.

Armenia has previously acknowledged that “a number of units of the Armed Forces of Armenia entered Nagorno-Karabakh to help the Artsakh Defense Army” during the war. Armen Grigoryan, the secretary of Armenia’s Security Council, said several weeks ago that any conscripts from Armenia currently deployed to Karabakh will return to Armenia by next month.

Finally, Pashinyan touched on ongoing efforts to unblock transport connections between Armenia and Azerbaijan, saying Armenia is committed “to ensuring the connection between the western regions of Azerbaijan and Nakhichevan” and is “ready to provide that connection.”

The ceasefire says “all economic and transport connections in the region shall be unblocked,” adding that “Armenia shall guarantee” a route between mainland Azerbaijan and its Nakhichevan exclave.

Baku has repeatedly pushed for the passage to Nakhichevan to have the status of a corridor, implying Armenia would not have control over or checkpoints on the route. Yerevan has consistently rejected that prospect, saying it wants full control over the route.

In his address, Pashinyan repeatedly stressed that the route should function “in accordance with Republic of Armenia legislation,” including “passport control, customs control, and of course, security.” That may be seen as an implicit insistence against Baku’s push for a corridor.

Azerbaijan’s attacks and the state of affairs in Karabakh

The West should be careful what it wishes for in Karabakh