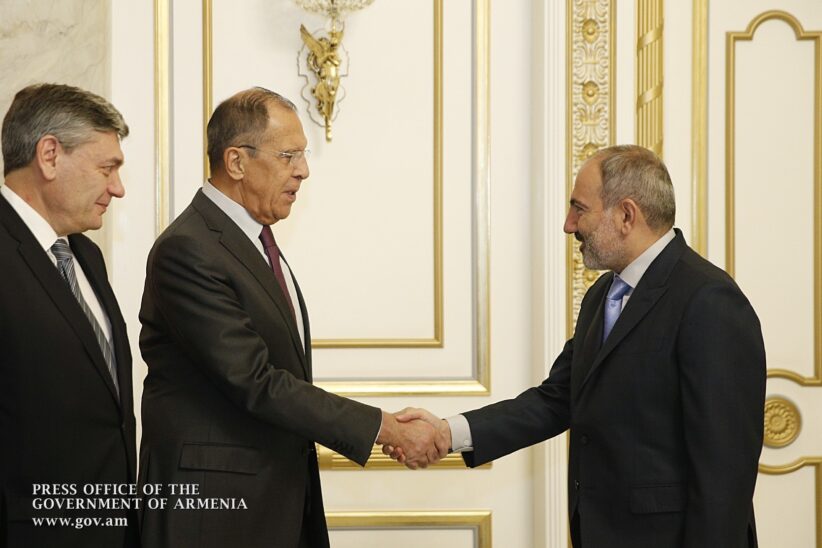 “We have not seen specific proposals, which the prime minister of Armenia wants to put up for discussion in the context of the Russian peacekeeping operation in Nagorno-Karabakh,” Lavrov said at a press conference, according to the RIA Novosti news agency.

“Any of the parties to the agreements that were reached by the presidents of Russia and Azerbaijan and the prime minister of Armenia, of course, has the right to propose additional initiatives,” he added.

The day before, Pashinyan called out the Russian peacekeepers for their apparent inability or unwillingness to prevent Azerbaijani incursions into Karabakh in a lengthy address to his cabinet, in his first public comments since a major escalation in Karabakh earlier in the week.

Azerbaijan launched two attacks on Armenian positions in Karabakh on Wednesday in a move it called “operation revenge,” leaving two Armenian soldiers dead and 19 injured, four seriously. Azerbaijan reported one soldier killed. Those figures make it one of the deadliest days in Karabakh since the end of the 2020 war.

Wednesday’s clashes and other past outbreaks of violence “bring to light questions of a systemic nature” and “raise questions among the Armenian public about the purpose and essence of the peacekeeping operation,” Pashinyan said.

He added it may be “necessary to take measures to establish that mandate (for the Russian peacekeepers) internationally, or to endow the peacekeeping mission with a wider international mandate.” It was not immediately clear what that meant.

The mandate granted to the Russian peacekeepers in the ceasefire is quite vague, only providing a five-year timeline for deployment extensions.

Moscow pushed for Yerevan and Baku to sign a separate agreement outlining a clear mandate immediately after the war ended, according to the International Crisis Group, a Brussels-based think tank.

The efforts fell apart when Baku refused to sign the agreement unless it recognized Karabakh as Azerbaijani territory, prompting Yerevan to walk away from the negotiations, according to Crisis Group reporting, citing unnamed officials on both sides.

Pashinyan has previously been critical of the Collective Security Treaty Organization for declining to respond to an incursion last spring by Azerbaijani troops into parts of Armenia, contrasting its quick response to mass civil unrest that shook Kazakhstan in January.

“Armenia applied to the CSTO to act on the mechanisms that are meant to be included in the provisions of the CSTO response to crisis situations,” he told fellow leaders of the Russian-led military alliance at a summit in Moscow in May. “Unfortunately we cannot say that the organization reacted in the way Armenia expected.”

Pashinyan also brought up the issue of arms sales by other CSTO members to Azerbaijan: “Those weapons were used against Armenia and the Armenian people. Honestly, the reaction of the CSTO members during and after the 44-day war of 2020 did not make Armenia very happy.”

Still, Pashinyan has been careful to temper his criticism with praise.

The peacekeepers “are a key factor in ensuring the security of Artsakh Armenians, and we highly appreciate the efforts of the Russian Federation in ensuring security and stability in our region,” he said in his cabinet speech Thursday.

Likewise, he stressed at the CSTO summit earlier this year that Armenia remains “committed to the organization’s further development and views the organization as a key factor in ensuring security in the Eurasian region and stability for Armenia.”

Resetting the relationship between Armenia and the diaspora