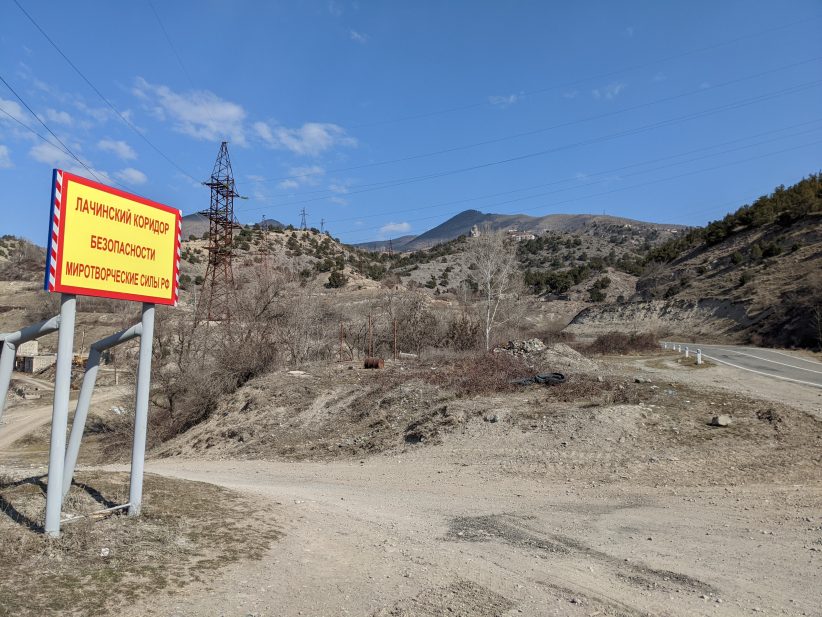 The Karabakh authorities’ decision Friday to order the remaining Armenian residents of villages and towns located in the vital Lachin corridor to leave their homes by the end of the month has prompted widespread dismay and anger in both Karabakh and Armenia.

But the evacuation order, coming just days after one of the gravest escalations in hostilities the region has seen since the end of the 2020 war, has raised more questions than it has provided answers.

The Lachin corridor, a five-kilometer wide strip of land controlled by Russian peacekeepers that contains the only road connecting Armenia and Karabakh, has become the source of escalating tension between Yerevan and Baku in recent weeks.

The ceasefire that ended the 2020 war says a new road should be built that also connects Armenia and Karabakh, while bypassing the current route. Once the alternative route is completed, Russian peacekeepers are supposed to hand over control of the old road to Azerbaijan and relocate to the new road.

Most urgently, it remains unclear what will happen to the hundreds of Armenians living in the town of Berdzor (also known as Lachin) and the villages of Aghavno and Nerkin Sus. They have until August 25 to leave their homes and relocate either to Armenian-controlled Karabakh or Armenia, according to Hayk Khanumyan, Karabakh’s Minister of Territorial Administration and Infrastructure.

But Berdzor and Aghavno residents seemed skeptical of the authorities’ ability to manage mass resettlement programs when CivilNet’s Karabakh team went to visit the communities over the weekend.

Aghavno resident Lida Smbatyan echoed those thoughts: “It’s cruel, it’s so cruel. What have we done to deserve this…There’s no place, no shelter, and they don’t even allow you to take one stone with you…If we find even a tent to live in, it would be a miracle.”

The fate of a number of critical pieces of infrastructure located within the Lachin corridor remains just as unclear. First and foremost is the road itself.

While Baku has already finished building a 32-kilometer section of the new route that runs through Karabakh, Yerevan only started construction on the 8-kilometer portion that lies within Armenia this month, and does not expect it to be completed until early next year.

Anxiety is growing in Yerevan and Stepanakert that Baku could, in effect, cut off Karabakh from Armenia entirely when it takes control of the Lachin corridor by the end of the month.

Khanumyan, the Karabakh infrastructure minister, sought to allay such fears in an interview Monday with CivilNet, saying that “after solving certain technical issues, certain temporary solutions will be provided until the Armenian section of the (new) road is ready.” He did not elaborate.

What’s more, a high-voltage electrical line, gas pipeline, and internet cable all run from Armenia to Karabakh through the Lachin corridor as well. Fears are growing in Armenian circles that Baku could cut those too.

Earlier this year, Karabakh residents suffered two separate natural gas outages during unseasonably cold weather. Karabakh’s authorities blamed the gas cuts on Azerbaijani troops, whom they accused of blocking a pipeline from Armenia. Azerbaijan has not commented on the matter.

Khanumyan tried to downplay the chances that such incidents could repeat themselves, telling CivilNet that “communication and high-voltage lines will be moved (to the new road) as soon as possible. Other options are being discussed around gas.” Again, he did not go into any detail.

The Lachin corridor’s imminent handover also raises broader questions about government transparency and competence, both in Stepanakert and Yerevan.

Why did Karabakh order Lachin corridor residents to evacuate later this month if there is still no formal plan for the construction of a new route, and the three-year timeframe set in the ceasefire has not yet passed?

Why did Armenia agree to allow Azerbaijan to start building its section of the new road, including in areas in Karabakh that remain under Armenian control?

Why did Armenia wait until this month to begin building its portion of the new route, knowing full well that Azerbaijani construction crews were ahead of schedule on their section?

All those questions remain unanswered, at least for now.

Read more: The Armenian government hides the fact it agreed to hand over Lachin ahead of schedule

Did Armenia hide the fact that it would hand over Lachin corridor ahead of schedule?