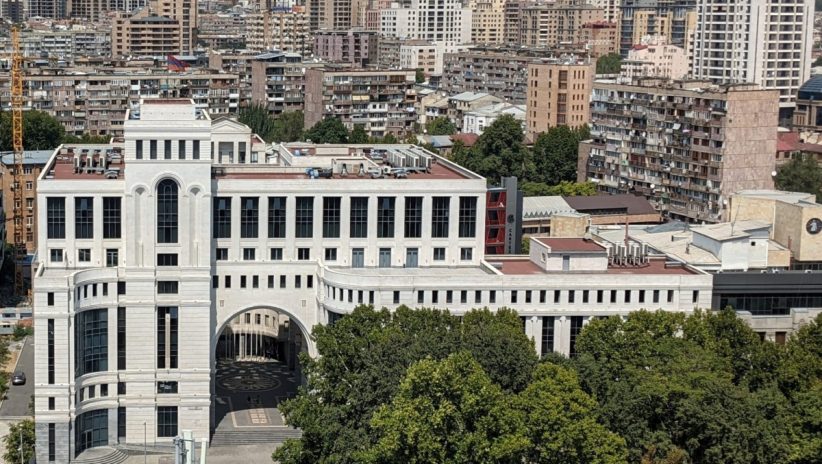 Armenia “highly appreciates the position of those countries which, having a deep understanding of the conflict, refused to participate” in an Azerbaijani conference over the weekend in the key Karabakh city of Shushi, a spokesperson for Armenia’s Foreign Ministry said Tuesday.

“We reiterate our position regarding the inadmissibility of unilateral visits to the territory of Nagorno-Karabakh,” Vahan Hunanyan said in comments provided to the Armenpress news agency.

Hunanyan was referring to an Azerbaijani-organized conference on Saturday that brought over 150 foreign service officers stationed in the country to Shushi, which diplomats from France and the United States pointedly declined to attend.

David Babayan, Karabakh’s foreign minister, said earlier the authorities in Stepanakert also “welcome” the decision by Paris and Washington not to send their diplomats to Shushi, calling it “an important political and humanitarian step.”

Meanwhile, the French and U.S. absences sparked a fresh round of recriminations between Baku and Washington over the weekend, with Hikmet Hajiyev, a senior foreign policy advisor to Azerbaijan’s president, saying the decision amounted to “disrespect for our territorial integrity.”

The U.S. embassy in Baku quickly hit back at Hajiyev’s comments, telling the Azerbaijani service of Voice of America that “there is no greater supporter of Azerbaijan’s independence and sovereignty than the United States.”

Since capturing Shushi during the course of the 2020 war in and around Karabakh, Azerbaijan has facilitated a number of visits to the city for foreign diplomats stationed in the country, but French and U.S. foreign service members have declined to travel there.

Russian officials had also refrained from traveling to Shushi until July, when Russia’s ambassador to Baku paid his first official visit to Shushi, alongside Azerbaijan’s ambassador to Moscow, in a widely publicized trip.

It was not immediately clear if Russian diplomats were among the over 150 foreign service officers who attended Saturday’s conference in Shushi, but Hajiyev pointedly did not call out Russia in his remarks.

France, Russia, and the United States co-chair the Minsk Group, a body under the Organization for Security and Co-operation in Europe that has led efforts to mediate a peaceful resolution of the Karabakh conflict for many years, largely without result. Rising international tensions over Russia’s full-scale invasion of Ukraine in February have thrown the group’s future in serious doubt.