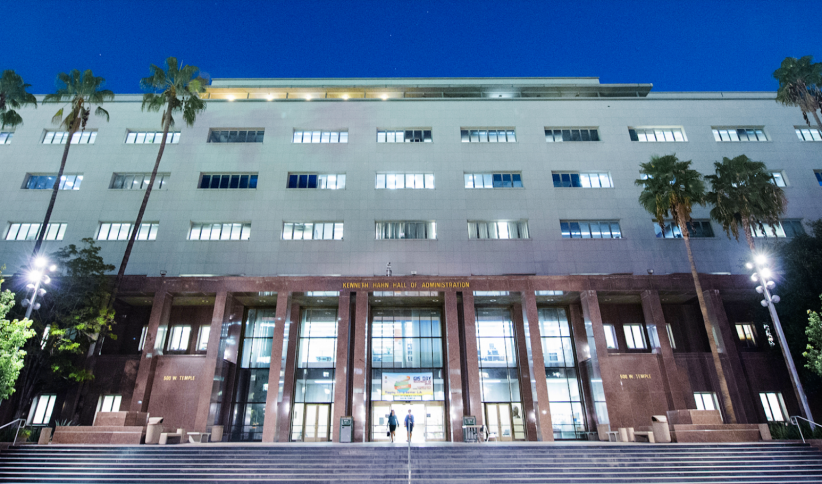 The recent round of recriminations between Baku and Washington seems to have moved to Los Angeles, where a social media announcement on Monday by the outgoing Azerbaijani Consul General sparked a series of official refutals from members of the Los Angeles County Board of Supervisors.

Following a tweet by Azerbaijan’s outgoing Consul General in Los Angeles and ambassador-designate to Germany Nasimi Aghayev expressing his gratitude for a certificate of appreciation he claimed was presented to him by the County of Los Angeles, several LA County Supervisors publicly repudiated their alleged endorsement on Tuesday.

The certificate, which Aghayev posted alongside his announcement, appeared to be signed by four of the five LA supervisors. It expressed “deep appreciation” for Aghayev’s service in Los Angeles and his contributions to strengthening “the ties of friendship between Azerbaijan and Southern California.”

All four of the LA County officials whose names appear on the certificate – Holly Mitchell, Hilda Solis, Janice Hahn and Kathryn Barger – have publicly denied signing the certificate, noting their signatures were added without their consent or knowledge.

“My signature was added without authorization from my office,” wrote Supervisor Kathryn Barger of the Fifth District. “I have and will always stand in solidarity with the Armenian community.”

Similarly, Supervisor Hilda Solis, representing the First District, wrote, “Thank you for bringing this to my attention — we are investigating the matter promptly. Please know that I have always stood in solidarity with the Armenian community, and [am] grateful to represent Little Armenia which is a part of the First District.”

Supervisors Barger and Solis shortly thereafter released official letters from the LA County Office of Protocol clarifying that their signatures were “mistakenly added” and providing an explanation for their “oversight.”

Supervisor Janice Hahn of the Fourth District also responded on Tuesday, saying, “My signature was added to this scroll without my knowledge.”

She added, “I have always been a strong supporter of the Armenian people and I can see why this has offended so many Armenians here in LA County. I sincerely apologize.”

Chair of the Board and Supervisor for the Second District, Holly Mitchell, made a similar statement on Wednesday.

“My office did its due diligence to look into this matter [and] I can confirm my signature was not authorized to be added to this scroll,” she wrote, adding, “I have the utmost respect for our Armenian community.”

Shortly after the initial comments by Supervisors Barger and Solis, Aghayev denied their statements, calling the certificate “authentic” and claiming it had been “signed by LA County supervisors” and presented to him “officially” last week.

He later accused the ANCA, an Armenian-American lobbying organization, of “bullying & intimidating the Supervisors into denying their signatures.”

The ANCA and Armenian-American activists have welcomed the Supervisors’ comments, expressing gratitude for their support of the Armenian community in Los Angeles, especially in the context of Azerbaijan’s continuing violence against Armenians.

Armenia and Karabakh should be ready for new escalations by Azerbaijan